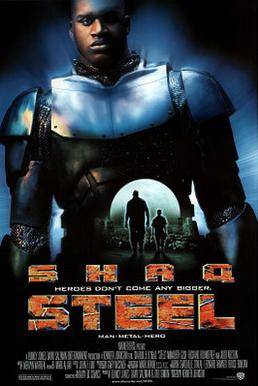 For whatever reason, I decided to buy Steel today, yes, that Steel. Here are some random thoughts I have on the movie.

I enjoy this movie. (For the record, I also enjoyed Catwoman.) Even I have no idea how this was made.

To say Shaq is not a very charismatic actor might be an understatement. However, he is believable as John Henry. He does come off as a likable but his acting is not, umm, convincing. How convincing does he have to be in a 90s superhero flick? Apparently, he doesn’t. If I were to leave it at that this movie isn’t great. Then it does something, it charms the hell outta me. There is a 70s blaxploitation wah guitar doused soundtrack mixed with 90s hip-hop. There is a bad guy with an eyepatch and leather vest with a smart-talking gang. Oh, and Richard Roundtree shows up. Judd Nelson is also there and he hangs out with a guy that looks like a longhaired Lars Ulrich.

The costume is about 10 degrees away from Bibleman ridiculousness which makes me like the movie that much more. 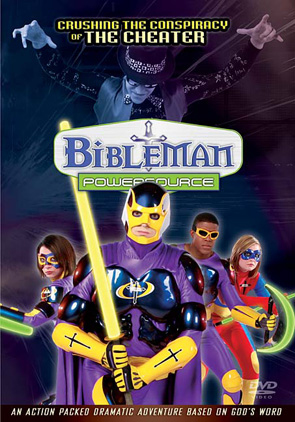 For all of this movie’s faults, it is a lot of fun. A lot of dumb superhero, family friendly-ish, neo-blaxploitation fun.

And the movie gives us a character who’s essentially Oracle.

But yeah, Shaq can’t act. That’s why I consider it to be the worst DC movie, despite having some entertainment value.

You are right! We did get a weird Oracle-lite character. I never once thought about that but now it won’t leave my head.

Bibleman and his crew are definitely action packed. 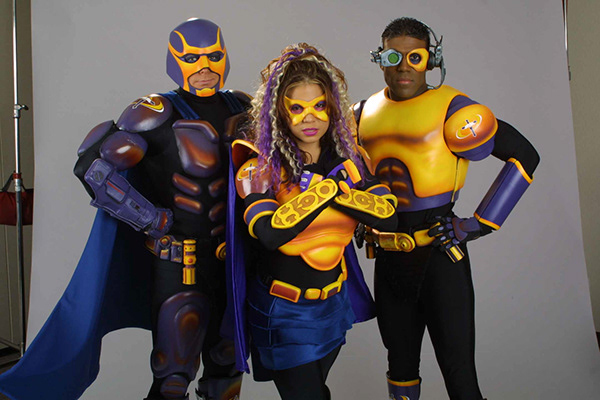 If the purpose of the movie was to make me want to read the Bible rather than watch that movie, it’s a success

This is an entire series! From my google searches they have moved onto animated features but nothing will be as cool as the guy who was not Scott Baio from Charles In Charge in a superhero costume.

I watched the film for the first time last year on Tubi (it’s since gone off the service). It deserves it’s reputation.
-Shaq’s not an actor, but I can forgive that.
-The recurring free-shot joke was funny, if you were familiar with Shaq.
-It was obvious that Shaq had to do all his own stunts. Of course, finding someone to (convincingly) stand in for him would have been difficult.
-Richard Roundtree likes the shaft. Because of course he does.
-Richard Roundtree also has one of the most bizarre lines I’ve ever heard in a film. I won’t repeat it here, because of the language, but if you’ve seen it, you can probably figure out which one it is.
-I had a hard time understanding how it took the authorities so long to identify him. “We’ve narrowed our list of suspects to seven-foot tall men with advanced engineering degrees. Getting through them all could take some time.”

I’m not sure what you meant by not being sure how it was made, but you may be aware that they were working on a Superman movie based on the Death and Return of Superman once. This film was originally planned as a spin-off from that film. So it’s spin-off of a film that was never made.

This film was originally planned as a spin-off from that film. So it’s spin-off of a film that was never made.

This is the mystery. It really makes no sense in how it was made. The idea of doing a spin-off makes sense but I find it hard to believe they went forward with this after 86ing the Superman movie. I really did enjoy this movie and seeing Richard Roundtree in a Shaft-lite role was pretty excellent. Then again, I was a fan of the newest Shaft movie as well.

I haven’t watched it yet, but yesterday I was browsing amazon movies and came across it, at which point my neighbors probably heard something along the lines of “Holy st they made a steel movie! Oh my god, oh wait…no way…is that…is that SHAQ??? No f**g way, this is the best thing ever!”
It’s okay though, but neighbors already know I’m special, I also yell when I try to watch Titans…far less happily though​

I still have never watched this movie. I have been wanting to buy a copy on dvd but they can be hard to find. I might just have to buy one online. I am going in with low expectations.

If the purpose of the movie was to make me want to read the Bible rather than watch that movie, it’s a success

you have made my day