Hal is a very interesting GL, proving that humans can hold their own against the other species of the galaxies, worthy of the honor guard title, and wielding a crazy command of the emotional spectrum.

Morrison and Sharp have gone and given Hal an upgrade. Most notably in the latest issue were several matter altering powers.

I’d like to use this thread to capture some of the cool things Hal has accomplished with his ring that we’ve not seen other GL’s do as well as add to it all of the crazy Morrison is about to add to the Book of Oa that a Green Lantern’s ring could be capable of. All are welcome to contribute Hal’s past, but if you’ve got Season 2 of GL in your pull list, this thread is truly up your alley.

It was from a previous run (HatGLC I think), but Hal made his ring from willpower. I don’t think anyone else has done that as a GL.

I think that happened at the end of the Renegade arc. I’m fuzzy though on when that stopped being a thing. I don’t remember if that got addressed in the Hal Rebirth series (2016) or did Morrison ignore it. I do remember the guardians not being thrilled a ring was made without their involvement.

happened at the end of the Renegade arc

I believe this is correct, and as far as I’m aware his ring is the same. I remember it being mentioned when Hal and Kyle were captured by Zod. Of the 4 issues on DCU, I don’t think there’s be confirmation for the Grant Morrison series.

New power from the new power battery below:

The incredible shrinking machine. And the weird part is Hal isn’t sure if it was just his idea or the ring’s, but the words came out of his mouth. I’m curious if the guardians are finally finding a way to control Hal through his own use of will power or if this truly is a fun upgrade.

Hal’s ring has mind powers! From Flash 191. It can probe a being’s mind. 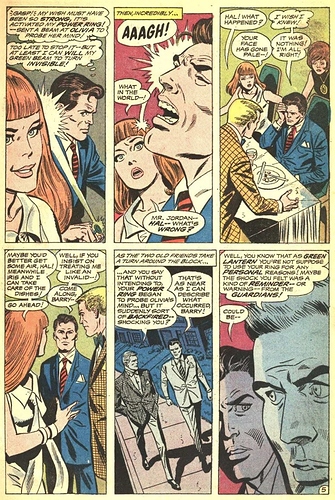