Some “Re-Mastered” Comics Should Really Be Re-Re-Mastered

I don’t know exactly when comics started to be re-mastered. It might have been back in 1989 with the launch of the DC Archive Editions. I also don’t know if “re-master” is the right term to use here, but it’s basically the process of re-inking and re-coloring very old comics that hadn’t survived the ravages of time that well.

With the advent of digital comics, it seems like this process was sped up, and the techniques got better. There are exceptions, but most of these I’ve seen have been fairly well done.

However, there are still some leftovers from before this era where the approach wasn’t as refined as we expect to see today. For example, Wonder Woman #1 (1942) as it exists on the DC Infinite service, still seems to be using the re-mastered version which I assume goes as far back as 1998 when the first Wonder Woman Archives volume came out.

Here’s a side-by-side comparison of the original art as it appeared in the final issue, and the re-mastered version: 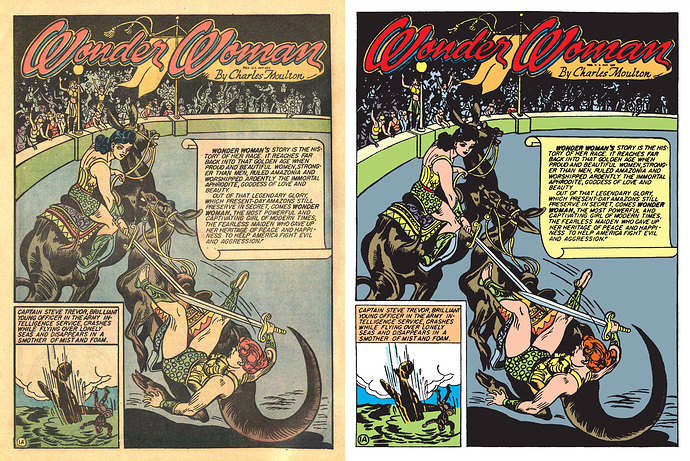 Look at the detail on Diana’s face, and on the crowd in the background. So much of it is lost in the “re-mastered” version.

Sadly, this is how these pages also look in the prestigious Omnibus collections, too. It seems that with each new collection released, they just use this same version again.

However, with a service like DC Infinite, there’s an opportunity to correct this (just as streaming services are able to update movie and TV copies as we’ve recently seen with blunders accidentally showing up on Game of Thrones and The Mandalorian). Is this on anyone’s radar? What’s involved in getting something like this fixed? Is posting here as lost a cause as making requests?

I’d love to hear the community’s suggestions as to how we can raise awareness about this. As well as other examples. It’s a real shame to see these treasures neglected like this.

Hey @scarecroe, thank you for bringing attention to this, and I’ve gone ahead and passed this up to the admin team for consideration on what can be done. We’ll keep you updated!

In the meantime, if you (or anyone else) have any other suggestions, please feel free to continue sharing them. We are always on the lookout for new ways to improve DC Infinite, and feedback from you and this community is invaluable!

Thanks Shayera! I’m not sure how many people are aware of the problem.

This has been a known issue with Golden Age reprints for as long as there have been Golden Age reprints. I think it goes all the way back to like the Silver Age, when Golden Age stories would occasionally get reprinted in anthology titles, but it continued well into the modern era of Archive editions at DC and Masterworks collections at Marvel.

If I remember right, the problem stemmed, at bottom, from the low-quality paper comics used for most of their history. Because they degraded so badly–and the ones that weren’t degraded were locked away in carbonite by collectors–they weren’t really useful for reprinting. So the technique that was used was just to lightbox (read: trace, badly) those old Golden Age stories. Some jobs were better than others, but all of them were noticeably inferior. A lot of people–including me, for a long time–just thought the Golden Age artists were bad artists because of how bad a lot of those old comics looked in the forms that were accessible to 99.99% of readers.

Again, these are all old memories now, as I’m only just returning to comics after about ten years away, but I believe the first Golden Age comics to get “re-remastered” were those reprinted in The Batman Chronicles Vol. 1. For reasons I’ll get into, it does not appear that this was true for all of the Chronicles books, athough the initial sales pitch was that it would be. But I’m certain that at the very least, Volume One of the Batman Chronicles used the new method. This technique required DC to basically destroy an original copy of the book. They would use some chemical to drain the color out of the pages, get a super hi-res scan of the black-and-white page, and then recolor it digitally.

Supposedly, this was going to become the new industry standard for how you restore and remaster ancient comics. Anything reprinted from 2005 onward was supposed to use this technique. However, the Chronicles line never finished, and Archives also ended. The Batman Chronicles, at its final eleventh volume, only caught up to roughly Volume 3 of Batman Archives/Volume 5 of Dark Knight Archives. Superman Chronicles went ten volumes, and Wonder Woman, Green Lantern, and Flash barely even got off the ground. The Chronicles line, which along with the Archive Editions had long been suspected to be in danger of extinction, released its final volume in early 2013. The last Archive came out in 2014. By this time I was taking a lengthy break from reading/buying comics, but it had already become apparent that most of the Chronicles books were in fact not “re-remastering.”

One of the first things I did when I came back to comics a couple months ago was to check in with some of the old blogs and forums that focus on collected editions. I was not surprised to learn that Chronicles and Archives were dead, nor that DC had started a new line of reprints that were redoing much of the same material yet again. The biggest bummer, though, was the apparent fact that none of the re-reprinted material in these omnibuses was being redone with the new technique. Put another way, if it had been “re-remastered” for Chronicles, that was the version we would get in these omnibuses. If, however, it had not gotten the new technique, it was not getting the new technique now. So for the third time, we were getting badly lightboxed trace jobs of old Golden Age stories. And you’re right: it’s obvious, it’s very noticeable, it’s ugly, and it’s frankly disrespectful to the art and the artists’ legacies. Like…that’s not even the same face on Wonder Woman. That’s on the same level as the way DC in the 70s had Al Plastino redraw Kirby’s Superman faces. I wouldn’t be surprised if that particular job goes back decades, with a reprint appearing in a Silver Age title and a then-contemporary artist redrawing Wonder Woman’s face to look more like she did at the time.

In fact, as I wrote this, I decided to test that theory. Per an archived version of comicbookdb, this story was reprinted as early as 1973 for Secret Origins #3. That issue had a Jul/Aug 1973 cover date. No issue of Wonder Woman came out with that cover date, that would correspond roughly with Wonder Woman 206 or 207. I took a look at those issues on DCUI and whoever was drawing the book at that time definitely did not do the redraw of Wonder Woman’s face in that reprint. But I still can’t shake the feeling that I’ve seen that version of Wonder Woman before. I think I remember it from an ancient early-1970s-era trade paperback of Wonder Woman comics, probably one of the first such collections ever released, that my older sister had when she was a kid and I believe still has. Next time I visit her I’m gonna have to take a look at it.

Anyway, all of this is a long-winded way of saying yes, this has been a problem for literally decades, it’s a problem that both DC and Marvel have always been aware of, and if it hasn’t been rectified yet, it probably won’t be. DC has had numerous opportunities now to clean up their reprint of Wonder Woman #1, or even just to do a better lightboxing job! They’ve reprinted the story in books with three different trade dresses. If they were going to fix it, they would have.

I’ve noticed that some of the faces in the reprinted stories in the 80 Page Giants from the '60s had some bizarre looking faces in a heavier ink than the rest of the panel. That may be a place to look when it comes to what you’re talking about.

Wouldn’t surprise me. It’s downright upsetting the degree to which we actually don’t really get to read these Golden Age stories as they were originally presented. And it’s not like the genuine article isn’t out there! So many Golden Age comics are preserved on microfiche and archived in various libraries. DC themselves probably has such an archive, and could digitize it and use it for reprints as well as for DCUI if it wanted. But the nature of capital is to avoid unnecessary cost, and that would be an unnecessary cost.

I honestly doubt DC has a lot of golden age books in their original forms, and probably doesn’t even have some stories in their archives at all because it wasn’t deemed worth keeping, because who’s reading Tex Thompson or Congo Bill? Comics were considered something to read and throw away. Seduction of the Innocent caused a lot of morons to burn them. Everybody has heard at least a dozen stories of moms who toss their kids comics when they leave for college. I mean, even my mom destroyed my books at random to punish me. One of the reasons why some comics are so expensive these days is because the amount of issues that have survived are incredibly small.

DC may not have acquired archival copies of its old books, but they definitely exist. Waaaaaay more obscure Golden Age material is still around on microfiche in various libraries, so it’s hard for me to believe they can’t get their hands on a way to remaster Wonder Woman #1. I mean…we’re sitting here looking at a pretty good scan of the original H.G. Peter page right here and we’re just some people on a forum. It’s a question of whether there’s a will to do right by the material, and it would seem there isn’t.