Shadows of the Bat: Mariko Tamaki Previews the Upcoming Bat-Event 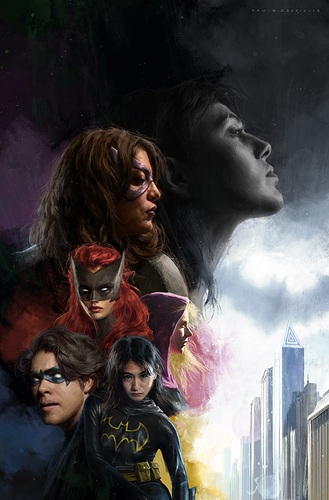 “Fear State” may be reaching its end, but no matter what happens with the Scarecrow and Simon Saint’s oppressive Magistrate, when you’re talking about Gotham, there’s always a new terror hiding in the shadows.

Which brings us to “Shadows of the Bat,” a massive new 12-issue weekly Detective Comics event that kicks off in January and shines a big, bat-shaped spotlight on one of Gotham’s darkest corners—Arkham. However, Arkham is no longer just a simple asylum, it’s been upgraded and reimagined into a cutting edge, artfully designed new tower overseen by an enigmatic new personality known as Dr. Wear. The Bat-Family suspects that all is not as it seems with this new project and that Dr. Wear may have other more sinister plans, but learning what those are will require them to infiltrate Arkham’s frightening new complex…and to do it largely without the aid of the person who trained and molded them into the heroes they are.

“Shadows of the Bat” will catapult Detective Comics to new levels of action, mystery and suspense, while bringing some of the Bat-Family’s supporting heroes to the forefront. And did we mention that this week’s Detective Comics 2021 Annual helps set the whole thing up? With that in mind, we thought it was the ideal time to sit down with “Shadows of the Bat” writer Mariko Tamaki for a free-ranging discussion about what we can expect from her biggest and most ambitious DC storyline to date, which heroes will be taking a leading role and just how suspicious we should be of this oddly named new doctor. (Is he even really a doctor?!?)

To read the interview with Mariko Tamaki, head over to DC Comics!

Are you excited for Shadows of the Bat in early January, 2022? Let us know in the comments!

I’ve been hoping they’ll start actually giving us something about Shadows of the Bat soon, and this is EXACTLY what I was hoping for - Die Hard plus Grifters plus Bats - exactly the kind of elevator pitch that can get me excited! Plus, Huntress being featured, and Spoiler - always a huge plus for me! The covers by Irvin Rodriguez look truly amazing, and the variants are also wonderful! RIP fans wallets for three months!

This should be interesting. I just started on reading Detective comics annual.

Those covers stand out so much, in a good way.

Just finished the anual and i am Kinda hoping we will finally have a definitive Red Hood meeting the Huntress moment as these guys still have not really had a definitive meeting outside DC 1000 or 1027.
also noticed they brought in a character from batman forever. Chase Meridian
side note: I just realized a year in real time has passed since batman vol 3 101 hopefully that year is up in the comics too and we can get some BatCat action crossover in batman and catwoman.

So, I know that this event won’t hit DCUI for a few months, but the first month has concluded this week, and I thought it was outstanding! Anyone else checking out “Die Hard In Gotham”?

Loving this! 'Tec has been my fave since Tamaki took over. I miss Mora, but Reis is awesome. I have no idea where this is going.

Reis has been truly amazing on art!

Weird interesting tidbit: I was really bored and decided to take every bold word in the second issue and write them down…they read like notes a detective or shrink may take, a stenographer or reporter may take. it’s actually rather interesting.
ps: I am also hoping we will get to see Jason todd in this at some point.

What did people think about the reveal in 1050 and how it plays out in 1051, and how did you like Max Raynor taking over art? I thought the reveal was so clever, and I think Raynor, while not as powerful as Reis, is really, really good.

I enjoyed Psyco pirate being revealed…however it seems he is a new Psyco pirate and not the remanent from Infinite Frontier. and it seems they are soft rebooting the Huntress’s backstory.

Honestly, I like the art of the backup more than the main story. However, given the art in the first four, was done by three people a penciler inker and colorist makes a bit of difference in the end results when compared to the art of issue 1051 where art is done by one person and a new colorist. the dueling personality of of the first few issues artists of an inker and a penciler adds a different personality to artwork that seems to be more chaotic fitting for the opening four chapters, now it seems we will have just two than the personalities of an artist and a colorerist this one with a taste for brighter colors.

Well, Tamaki says that this is the Psycho Pirate from Infinite Frontier, trying to hide from Darkseid (Detective Comics: Mariko Tamaki Teases the Shadows of the Bat's Chaotic Secrets).

I love Fernando Blanco, Ivan Reis, and Max Raynor, so it’s all good art for me.

It was an interesting article. however, I am still trying to figure out how Pirate got back to Earth from Earth omega.

thats what i was thinking as the mask is powerful. but it would have to be used on a royal to get them to send him to earth.

Ok, the latest issue revealed that Nanako’s wife was to be a patient that is one hell of a twist.

God, I hope Jason is introduced as an adult in this. I really want the first cannon meeting of Huntress and Red Hood to finally happen.
Side note: they still have never met in the main cannon…and I would love a team-up between Jason Todd and Helena Bertinelli.

Really enjoying all of the twists and turns! I don’t know if Jason is supposed to be regularly interacting with the Batfamily given his status in Task Force Z (or when that’s supposed to be happening). It would be pretty interesting to see, though I also enjoy what we are getting with Babs, Helena, Steph, Cass, Dick, and Kate.

Taskforce Z issue 4 is taking place before Batman 118 and did not have an official fear state tie-in. So he can appear in Shadow of the bat. Side Note: Joker is pre-fear state, and Nightwing is taking place well Babs was staying with Dick before the start of batgirls.

I noticed the batbooks only sink up during crossover events.