Wow, was not expecting the Scooby Doo references and cameos in the latest episode of Young Justice! Was so cool to see. The only question is where the hell was shaggy??? Still cool though I remember the days of the Batman and Scooby Doo crossovers.

What did you all think of the cameos and references? I think this is also a response to the Scooby Doo WrestleMania Mystery which had Young Justice cameos in it.

I wondered if anyone else caught that! I think the mayor and Sheriff were also throwbacks to “Scooby-Doo: Mystery Incorporated,” the greatest of all Scooby-Doo storylines. I loved it!

I was a extremely excited as soon as I heard Grey Griffin and Patrick Warburton’s voices along with seeing the Officer Stone look-a-like.
So I noticed Daphne, Velma, Fred (as a female), Fred Senior(The Mayor) and Officer Stone. Was there anyone else I missed?

Do you think that was representing Velma or Hotdog water? Lol

No, it was definitely Velma, given that bit where she loses her “spectacles”. Thought they went a bit overboard with the “nerd using big words” shtick, but otherwise, I loved this shout-out to Mystery Incorporated.
Though I was getting curious why there were only five people in the entire town.
@PhoenixTTV Or Beast Boy briefly taking the form of a Great Dane.

If it confused any of you, read Jack Kirby’s Jimmy Olsen run. They’re hybrids of the Scooby-Doo characters and the Newsboy Legion. So, Velma is Big-Words, Freddy is Tommy, and I think Daphne is supposed to be Scrapper, based on the hat. No idea why there’s no Gabby or Flippa-Dippa.

Also, I feel like this is a jumping-off point for the MST3K-style spinoff about Nightwing riffing Scooby-Doo episodes we never knew we deserved. 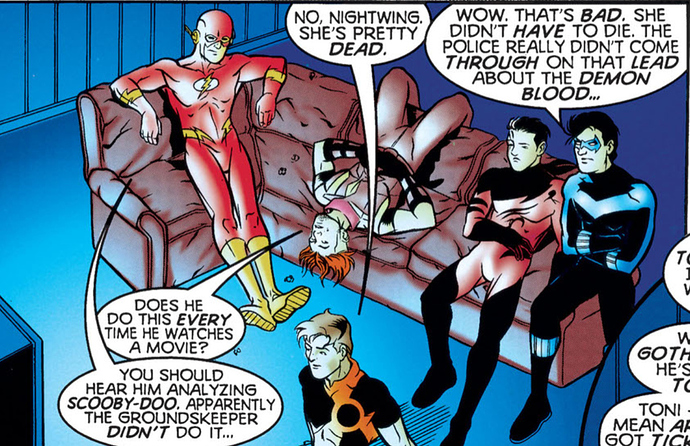 @BatJamags I can’t stop imagining him over analyzing Scooby-Doo now. “Clearly Velma assisted in the murder since she is attempting to avoid apprehending her partner by losing her glasses.”

“Shaggy should know better than to contaminate the crime scene by eating there. It’s like they’ve never investigated anything before.”

“If the ‘ghost’ passing through the wall was just smoke and mirrors, then where did the real perpetrator go? He has to be a metahuman.”