I noticed something at comicbookroundup today. 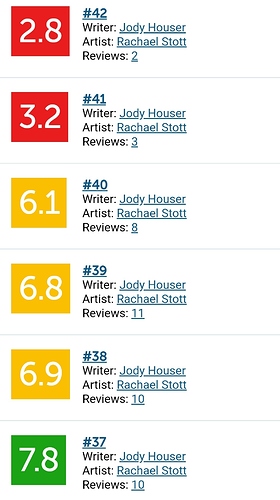 When DC moved Supergirl to digital, the reviews took a deep nosedive. I was a bit curious to why this happened as the comic has held the same quality throughout the last run.

When I looked at the critics reviews more closely, I noticed that the reviewers hadn’t changed their opinion throughout the run. What happened was that when the comic went digital, the review copies were no longer sent out, and with them went all the high grades. There was a huge difference in opinions between critics that were given free review copies and critics who were buying their comics.

This makes me pose a question. Are “paid” critics more reluctant to put lower grades for fear out of losing their freebie copies? Is it a random coincidence?

What are your thoughts? How many comics are given grades like 1 or 2 by reviewers, compared to lets say a much more neutral grade like 7-9? Are the “professional” critics polluting the reviews and landing all comics at an 8-ish average making it harder for buyers to make informed decisions?

Is it a problem?

Should review copies be removed?

This makes me pose a question. Are “paid” critics more reluctant to put lower grades for fear out of losing their freebie copies? Is it a random coincidence?

Look at the Last of Us Part II controversy. Critics who got review copies were giving the game 10/10. After launch the general public were much more negative. I’ve always been of the opinion that there is a sense of fear regarding review copies as you have pointed out. If you get one then you are a “legitimate” critc and nobody wants to lose that. Not all critics are like this but in recent years there has been a great wave of concern/anger around the topic.
I’m not saying that’s for sure happening here but it could be. Or it could be the comic got really bad

This is why I miss the golden age of film criticism, when studios would screen a film for free, and the critics would savagely rip it apart anyway. I suppose it reflects the higher journalistic standards in newspapers of the time. Now, capitalism has won.

I mean, there is some give and take with game publishers giving certain publications exclusive first looks at their biggest games, but I don’t know how much that really effects the rating.

I think the more simple answer is that critics look for different things than the general audience.