Written by Alan Moore, “The Killing Joke” the focuses on Joker and the dynamic between the two. It has gone down as one of the most iconic stories for either of them. And in many ways, that is completely justified. It was even bold enough to present a possible origin story for the character, which has more or less been the base for any potential Joker origin.

If you are a little Familiar with me and some of my posts, chances are you have read my thoughts regarding both Watchmen and Doomsday Clock. As well as Alan Moore himself. I have mad respect for the guy. But when it comes to this story, we seem to have the same thought. It is well known that Moore has ended up regretting writing this story ver shortly after it was released. He considered it being too dark and felt guilty that this story partly influenced the dark tone and direction comics in the late 80s and early 90s took.

Now Moore probably is a bit too harsh with his thoughts. You can look up more about what he specifically said. As a story on it’s own, it still is pretty great. While Moore has gone on recently about how Batman shouldn’t be dark (I know, weird/ironic) but this story really does work great for these characters. Let’s admit it, the Bronze Age of comics was already pushing comics to a more realistic and darker tone. This story (like Watchmen) just went as extreme as it could. So it isn’t surprising seeing a story as dark and twisted featuring these two characters existing. Great artwork, good pacing, knew how to present a believable Joker origin while also admitting that it could be a whole lie. There is a lot to recommend.

Having said that, there are a couple of major things working against this story. The first, the treatment of Barbara Gordon. Yea, might as well address it now. One can argue this isn’t a clear cut “fridging the girl” moment as say killing Kyle Rayner’s girlfriend. But there is no doubt that this was a pretty crappy way to treat an awesome hero. I do have to wonder if we would be having this conversation if we switched her out with Tim Drake. But there is no using wondering about hypotheticals. I would say that the silver lining of this is that she ended up becoming one of the few physically disable superheroes for several years afterward, Oracle. Proving she can still take names and kick butt no matter the situation.

The other main issue with this story actually can’t be blamed on Moore but rather the company DC. Killing Joke was supposed to be a standalone story, completely separate from the universe. But due to the popularity of the story, it ended up becoming canon. So, that means that so called ambiguous ending where the two are laughing which is followed by silence is ruined. Batman just threw Joker back in Arkham, return to the status quo. It does significantly lessen the impact of the story when you realize that. No wondering if Batman ended up breaking down and killed Joker. BTW, why the heck would Batman laugh with Joker? If this was a standalone story, I can let it pass to uphold the mysterious ending. But it’s canon, meaning that is REALLY out of character and bizarre.

Overall, while it certainly isn’t flawless, “The Killing Joke” is still a great story worth checking out.

The other main issue with this story actually can’t be blamed on Moore but rather the company DC. Killing Joke was supposed to be a standalone story, completely separate from the universe. But due to the popularity of the story, it ended up becoming canon. So, that means that so called ambiguous ending where the two are laughing which is followed by silence is ruined.

Not necessarily, because it could easily be said that from the point where Joker starts telling his joke until the end could easily be explained as “it was taking place in Joker’s head, and that’s not how it actually played out.” Geoff even hinted towards this in Three Jokers with this scene- 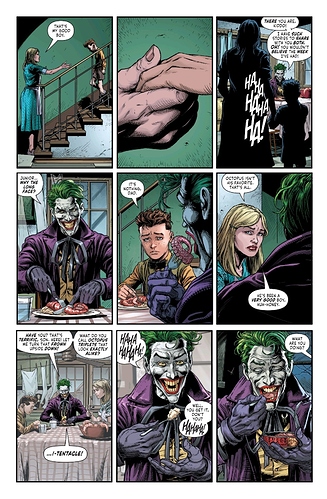 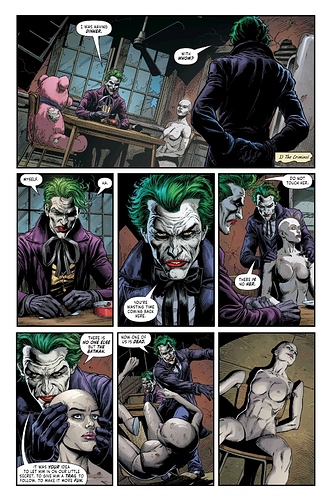 @TheTerribleToyman That is really fascinating.
I think the logical fix to the “girl in the Fridge” is that indeed nobody would have bashed it if this happenned to Dick, Jason, or Timm (not made yet actually). I would have for the adaptation made him shoot Jim Gordon Jr., since the significance is attacking Gordon’s kid, not Batgirl.

I have yet to read “Three Jokers” but I placed my pre-order a while back. So I should be getting it within a week or 2 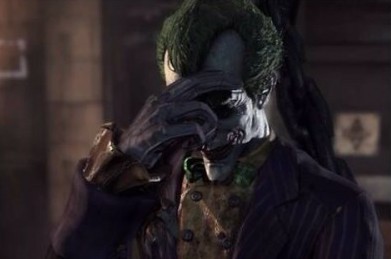 I’m sorry, I should have put a spoiler warning on that. If it softens the blow any- this scene happens very early in issue 2.