Reign of Supermen, is this a clue?

I finally watched Reign of the Supermen. Wow, they really went in a different direction from the comics. But in the end (spoiler) after Superman has saved the day he’s hanging with Lois and says he has to go because “Worlds Colliding”.
This made me think of the 1994 Milestone/DC crossover event titled “Worlds Collide”, which included Steel, Superboy, and a mullet headed Superman meeting Icon, Hardware, Rocket, and Static shock. Are the hinting at a future Milestone animated project? The comic book event happened almost immediately after the Reign story ended. What do you guys think? Would some Milestone movies excite you? Do you think Powerman 5000 will make the soundtrack? I would be pretty amped… 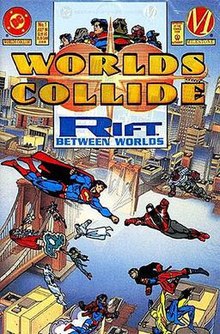 That sounds amazing. I would go broke watching that!

I think the “World’s Colliding” line was more about Lois and Wonder Woman hanging out (That people from his personal life and his professional life are starting to spend time together, it’s like his worlds are colliding)

But would I be up for an animated crossover with the Milestone characters in this animated universe? Absolutely! That would be fantastic.

Ah, PM5K. I got it. You know, they say Supernova goes…pop!

I’d like to see more of the Milestone properties in animation. The Static Shock series never interested me much, but I liked Static’s appearances on JLU and the characters that popped up on Young Justice.