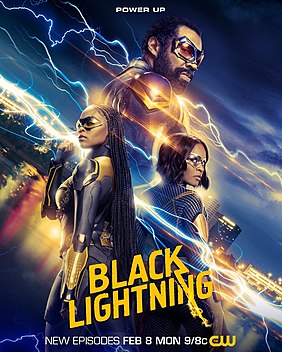 Synopsis: Jefferson pays Tobias a visit and warns him to stay away from his family.

Ummm… Well that happened. We all knew that Jennifer was getting written out of the show, but I really wonder if her Ark will end here or on the potential Painkiller show.

I feel like expanding the world with Painkiller is kinda the only way to go since most of the supporting cast of Black Lightning has been killed off lol. Also Brandon is nowhere to be seen or even mentioned.

All in all, good episode, I just really want to see how this all ends.

Jeff and Lynn on the road to patch things up. Very nice scene and the argument gave them what they needed to here. His door scene with Jen was great. Just a very gut hitting scene.

Tobias manipulating everyone and thing. He has it all under his thumb. Also is her gaurd Zsasz from Gotham.

Grace and Thunder having some sweet moments. And she debuted as Wylde pretty awesome™

The chief is definitely being manipulated by whale. And the others speech at the bar was great. Exactly what he need.

Also nice to see Lala use some more of his powers. And to see he cares for Jeff in a way.

Gambi getting deeper undercover. And TC being around which is nice.

Lightning all this stuff about asking for help and still doesn’t do it. And now she’s pure energy (I think). Jeff just lost Henderson now he’s going to be devastated.

What happened to Jen? What’s Tobias’ game? Is Gambi in to deep? What will happen to freeland? All this and more same

The CW is finally starting to advertise this show, I’d hardly call this advertising when it’s just clips that were uploaded after the episode aired. Granted, they are the 1st BL-related things posted on the CW’s channel in a little while, but we still need the actual promos for future episodes all the other shows are continuing to get

True, as I have said before, I don’t know why the advertising on this show is so light.