Preacher: Eternally Relevant or Best Left in the Past?

Or so it would seem.

In reality, Preacher is touching and thoughtful in a way that so few comics are. The villain of the series is toxic masculinity. The aesthetic hides the series’ true, sensitive nature, much like how American societal values mask many men’s soft emotional cores with steely shells made of bottled sadness and imprisoned trauma. For every joke about Arseface, there’s Jesse’s dad saying, well… y’know… 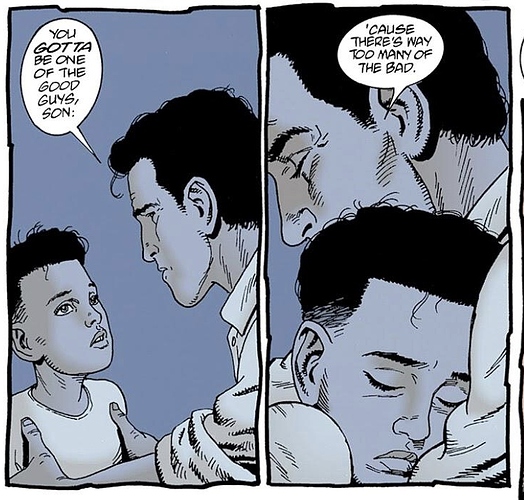 But, that’s my interpretation of the comic. And it’s one that is based on two readings of the series, both from quite a few years ago. My question is thus: is Preacher the eternally relevant, emotionally charged epic I remember it as, or is it another outdated piece of ‘90s extremism that belongs next to Liefeld’s X-Force and Savage Dragon on the shelf?

I think Preacher works towards something really important. No one is safe from caricature, and I think that counts as somewhat egalitarian. I wish Tulip wasn’t so susceptible to Cass’s addictive influence, but I would be ignorant to say that grief and heartbreak don’t make us do stupid things. What I respect about Preacher is that it weaves values and heart through its outrageous and shocking imagery and story. It might be a little overtly 90’s and that can be chuckle-worthy, but it’s a stepping stone into a different school of thought.
And no one can beat Ennis for making talking heads in a comic downright riveting.

finding ALL these comments quite compelling, i find it difficult to not fault the curators of DC.UNIVERSE, and i wonder why they have still not added PREACHER to the service.

i very much hope that they will correct this oversight upon the coming of DCU.INFINITE!

and i wonder why they have still not added PREACHER to the service.

Well, in the past none of the Vertigo books were allowed unless it was connected to a DCU original series. That’s why books like Doom Patrol, Swamp Thing and eventually Madame Xanadu were put on here.

The problem with putting something like Preacher on here is that it’s a creator-owned book and Garth Ennis as well as Steve Dillon’s estate has the rights to it. I mean, it’s possible that DC could make a deal, but who knows if that will come together?

Don’t get me wrong, I would be thrilled to see it on here, but I’m not going to hold my breath for it.