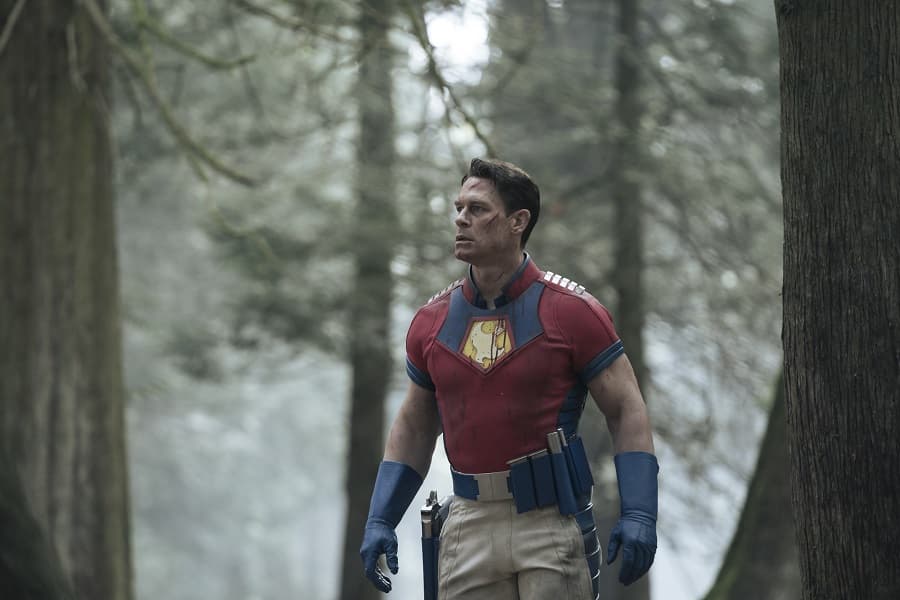 If you’ve been watching the debut season of HBO Max’s Peacemaker, you know we’re speaking true. James Gunn’s brilliantly deranged The Suicide Squad spinoff has managed to juggle an alien conspiracy plot, a kung fu revenge tale, an over-the-top family thriller and an occasionally heart-wrenching look at the complexities of family relationships and obligations—and it’s all worked perfectly. The much-anticipated season finale premieres tomorrow (or late tonight, if you want to get technical) and frankly, the thought of that being the end was making us cry—er, break into some face-muscle exercises.

So, we’re pretty ecstatic to hear that the series has been renewed for a second season, as shared today by both Gunn and Peacemaker himself, John Cena.

To learn more about Peacemaker Season 2, head over to DC Comics!

What were your thoughts on Season 1? Excited for more? Let us know in the comments!

Is episode 8 out yet? My account only has up to 7 available.

Episode 8 drops tonight at midnight PT, @keath. Hope you’re able to watch it before it gets spoiled.

I’m thrilled that Peacemaker has gotten a second season and even more thrilled and how well it has been received. The head of HBO Max said it’s the biggest show they have worldwide and THAT is great news for the future of DC on HBO Max.

A second spinoff of The Suicide Squad is also in the works for HBO Max, we’re getting a Penguin based spinoff after The Batman and most likely we’ll get a spinoff from Black Adam is well. All this plus a new season of Titans, Doom Patrol, Pennyworth and more plus HBO Max exclusive movies like Batgirl.

Say what you want about the demise of DC Universe but moving DC video content to HBO Max has greatly expanded the audience and we’re getting more than we ever would have had DC Universe remained in tact. The future is now and the future is bright!

Yes !! One of my fav DC shows ever

Is episode 8 out yet? My account only has up to 7 available.

@FelixLeiter is correct, Episode 108 airs tonight at 12AM Pacific. Keep an eye out

Episode 8 drops tonight at midnight PT, @keath. Hope you’re able to watch it before it gets spoiled.

Thanks, that’s what I thought! I’m usually pretty good at avoiding spoilers, but I think we all know the basic shape of the finale anyway. Can’t wait to see where season 2 goes!

That’s great news about more spinoffs to the movies. It think that’s a great format! (Is it too much to hope the Black Adam spinoff will be Ma Hunkel?) Would be awesome to do more kid friendly ones, too - maybe a spin off from Super-Pets if when it does well?

Now if only we could get them to resurrect Krypton.

DC, we want a six-issue limited series all about the Butterflies and their home planet!

Like the Blue Beetle movie, I hope WB moves this to a theatrical movie first. I want to see Babsies on the IMAX sceen!

as shared today by both Gunn and Peacemaker himself, John Cena

I think I’m genuinely in love with John Cena and his boundless love for Peacemaker.

Would be awesome to do more kid friendly ones, too - maybe a spin off from Super-Pets if when it does well?

I doubt it’ll happen but I’d love to see Eagly in Super-Pets.

I literally just caught up with Episode 7 an hour ago and came here to discuss with the thought (OH I hope it gets a Season 2) ONLY TO BE GREETED WITH THE NEWS OF A SEASON 2 GREENLIGHT!!!

I am so happy right now.

I am so happy right now.

I love it too! Super excited to watch Peacemaker’s progression in the next season!

I’m really happy for you guys even though I still haven’t seen it yet.

This was great to see. It means if there’s a cliffhanger tomorrow, we know we’ll get more later

As a heads up, if you haven’t seen episode 108 yet, James Gunn is doing another watch-along over on Twitter at 6PM PST this evening!

I am very excited to finish season 1 tonight, and really excited that this show is getting a second season! Hopefully most of the characters make it through the end to the next story!