Our Best, Most Titanic, Grand, Over the Top and Spectacular Reading for 2020 So Far! Y1 R13

[Superman Fan Club] and friends, for our best, most titanic, grand, over the top spectacular 2020 reading #13, we will travel through the Silver and Bronze Age Superman family stories like the True Time Travelers we are, using the Mind’s Eye 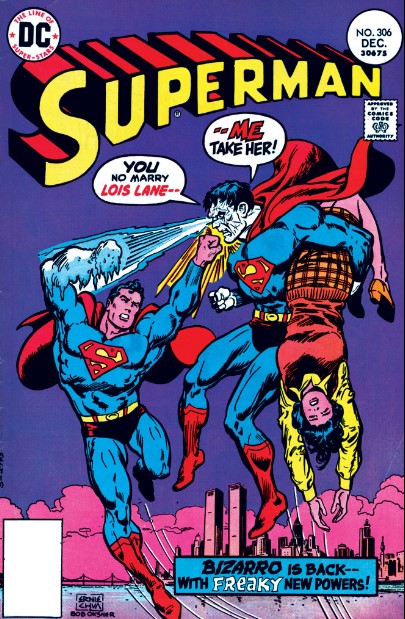 Not for the timid! Appearing in chronological order! 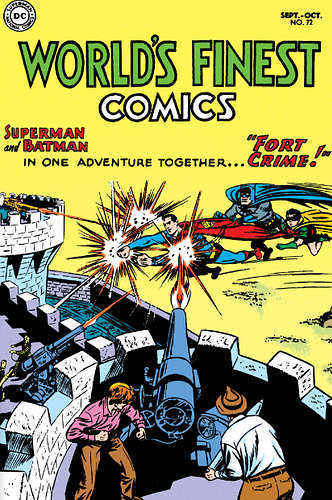 WORLD’S FINEST COMICS (1941-) #72 (September 1954 (the month and year Grandpa Don-el was born)) https://www.dcuniverse.com/comics/book/world-s-finest-comics-1941-72/79c9b33c-b94f-4544-ba89-1e7d9d816473/ Superman and Batman must find out who has been supplying weapons to the Heavy-Weapons Gang. It will be curious to observe here what they plunder after blowing things up to itty bitty pieces as in a battle with artillery!

Oh, it’s defensive fire against that authoritarian bully Superman, THAT explains the gag… 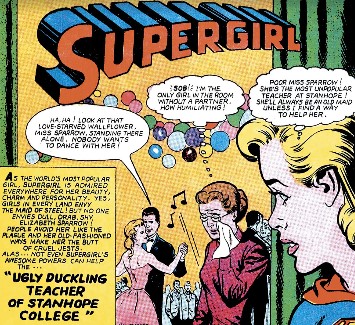 “THE SKYSCRAPER SUPERMAN!” Red Kryptonite turns Superman into a giant without superpowers who must stop aliens from stealing all the iron on Earth. “ Best Superman Story of the Year !” the cover proclaims, we better read this one extra-careful! The Supergirl.

story is “Ugly Duckling Teacher of Stanhope High!!!”- yes, over 50 years before the CW Riverdale series, truly ahead of it’s time!!!

That rasco Marty Pasko makes Superman battle his imperfect duplicate Bizarro, who is convinced that the Man of Steel has destroyed him home planet Htrae! 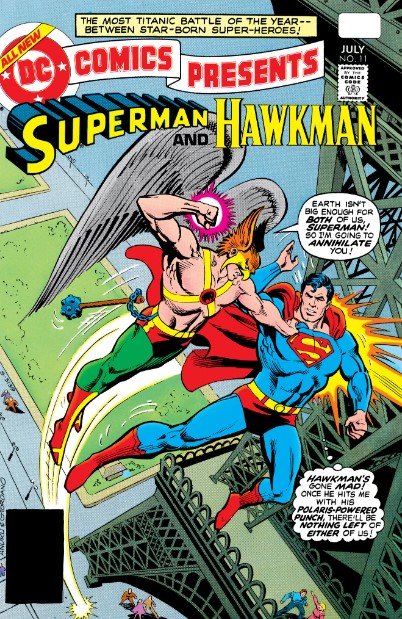 The Most Titanic Battle of the Year ” the cover notes, so we all have to read this one for sure!!! Oh, “ All New ” as well! Yup, there was a time at DC that noting the stories weren’t reprints this issue was big news!

Which villain this time around was the most compelling and interesting antagonist this time?

Please share any scenes or panels that stood out for you or meant something special from this reading selection.

Bizarro has ice vision??? Brrrr, especially poignant weapon this time of the year!!!

Well hello there Superman Fan Club and everyone else.

This was a lot of fun going through each of the decades and the stories that were told.

Ah, this is a tough one… I did enjoy reading each of them as they all had their fun moments…

How does the culture and times of when that story was written influence your choice?

Oh, maybe in answering this question it could help narrow the gap as to the one that I would pick as a favorite.

Here is a fun panel I had reading “the lingo” for the second World’s Finest.

There were also some good panels in this issue as well.

And finally, for the last story there was one panel that stood out to me.

Which villain this time around was the most compelling and interesting antagonist this time?

Controlling another hero to take down another hero by “ending” them sure brings a lot of momentum to putting them at the top of the list… Although… Those kids that were antagonizing poor Miss Stanhope really puts them at the top of the list as well. Can’t count out any criminal using kryptonite against Superman either, and also those guys trying to take out Batman and Robin as well was quite awful in their attempts… So I could see any being the most compelling as they were all quite interesting to me at this time.

It took much will power for me to not post the cover for the one Action comic reading this time around: 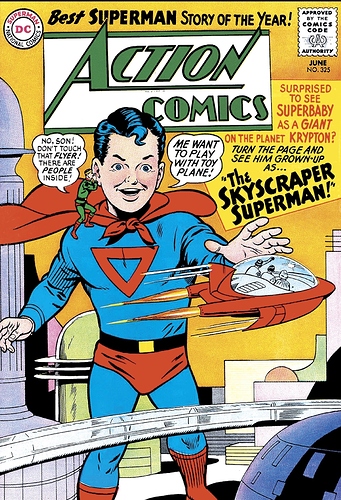 I may or may not still use the phrase “far out.”

Thanks to the many charms and Silver / Bronze Age issues of Action Comics and World’s Finest comics, this club can boat along for at least another year or so! And who knows, by then DC may release new digitized Silver and Bronze Age Superman wonderment!!

You are far too kind to do that Don! Thank you.

Oh yeah. That cover had me laughing pretty good as well as I had not seen this side of the Superman mythos before…

I’ll definitely have to check in again for future references to these fun ages of comics and more! Thank you for putting it all together.

Many thanks again, nice to have you visit this time around. I also enjoy touring various clubs during the month, sampling here and there. It’s like we’re all at a New Year’s Eve party with several levels here!

Seeing that red cape tied around baby Kal-El’s neck makes me think, “so the origin of his cape is he had a fixation with his blanket as a youth?” 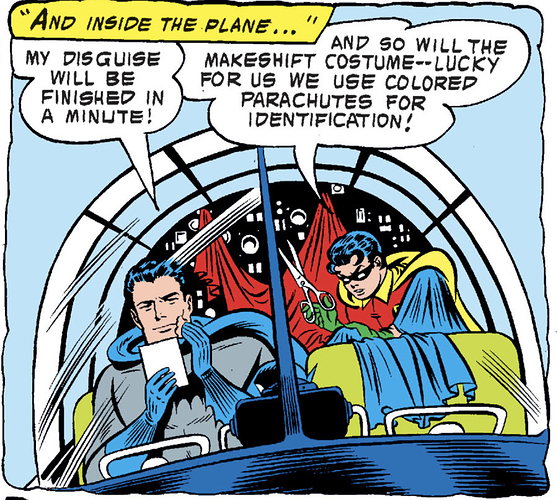 Stage make up and sewing in the field? That’s definitely Alfred’s influence.

Read the two World’s Finest. Both quick enjoyable reads. Agree with @ajm08g that I liked the tough guy lingo. Reminds me of last month with Clark Kent pretending to be a hardened criminal so he told the warden “phooey” that’s some good tough guy talk.
Also, no one bats an eye about a fort with a moat in the middle of the U.S.?
In the second, poor Batman and Robin dumped for Power Guy. I was actually hoping it was some kind of Lex Luthor trick.

Agreed. I’m also trying to make sense of the “colored parachutes for identification” statement… what cultural mystery buried deep in time is that about??? maybe it’s so if they crash in the middle of nowhere someone will see where they crashed?

Yeah, we might have known Power Man was really something else…also concerning World’s Finest 94 from 1958, I’m wondering if that team up origin story is brand new 1958 or if the Silver Age writer was rewording a much earlier Golden Age tale. Hmmmm…that ship cruise / Lois Lane triangle with Bruce / Clark we read I believe late spring this year was supposed to be a first team up too I thought… 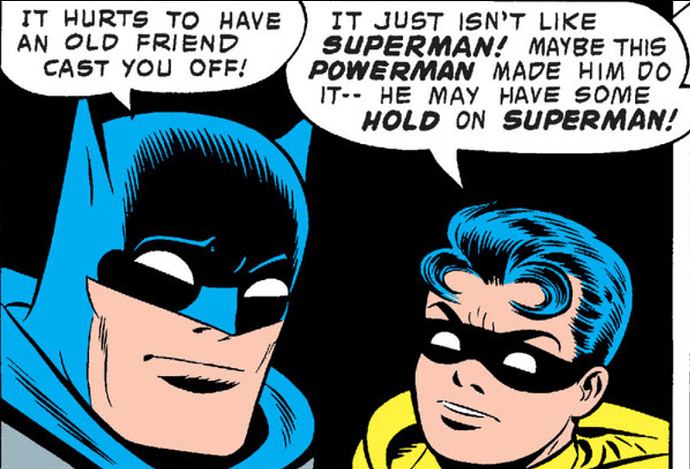 Nice little Robin really gets in some zingers here: 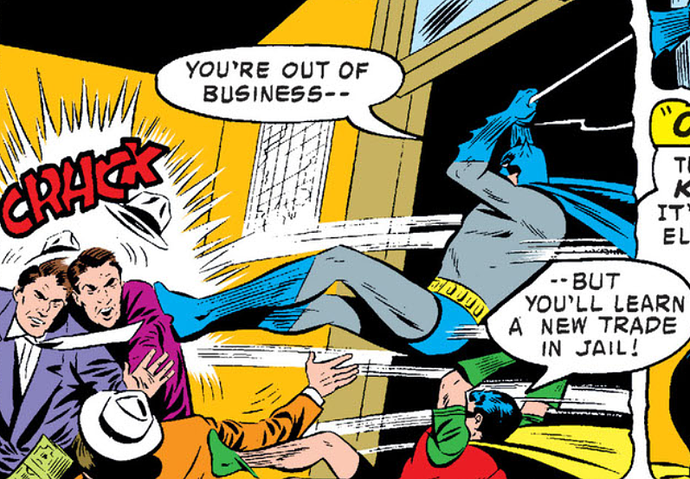 The Kryptonite cure below sure looks a lot more like a freshman initiation ritual: you want to belong to the Batman /Robin fraternity eh? Well you have to go through this first! 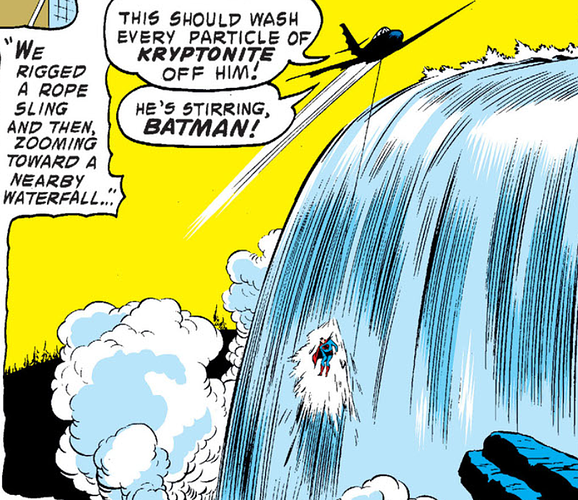 Also, no one bats an eye about a fort with a moat in the middle of the U.S.?

They probably didn’t think like President James Monroe. I just found this funny quote from him about a moat being around a fort that was built in Virginia…

"…you want a MOAT around this vastly complicated, ruinously expensive fortification you’re designing? Bernard, you are aware that it’s 1818, not 1418, right?!"

In the second, poor Batman and Robin dumped for Power Guy. I was actually hoping it was some kind of Lex Luthor trick.

Oh well. Poor Kelex’s distant cousin… Back to the Fortress of Solitude for you!

You know looking back at it, PowerMan did look a little stiff, didn’t he? 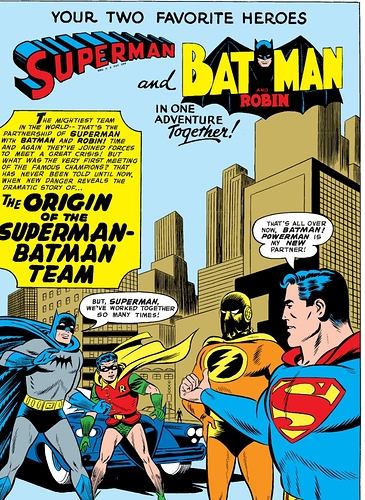 Apparently the character copyright lawyer was on vacation that week…

Also, no one bats an eye about a fort with a moat in the middle of the U.S.?

also my first reaction. I would have gone for wood or Adobe. Both equally capable of crumbling under Supes gentle touch. 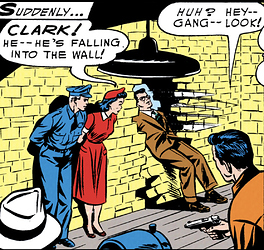 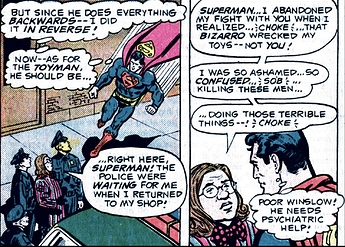 Poor Bizarro does not engender the same kind of compassion. 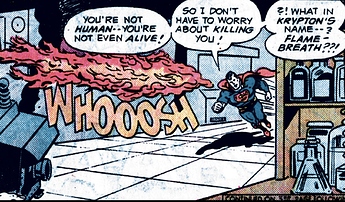 I thought this issue had some fantastic moments where story and art were perfectly in sync. 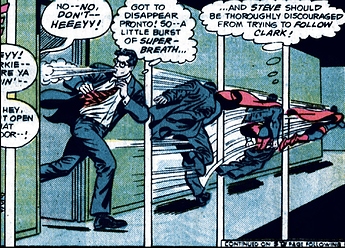 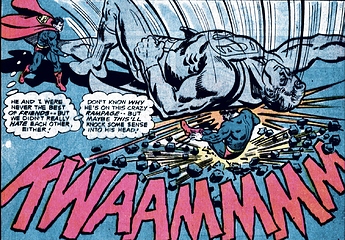 image1505×1047 818 KB
Two supermen, trying to beat each other with a giant Superman statue. You don’t see that every day.

The batman crossovers were the standouts for me. I just love when our heros get creative in using their environment to help them. 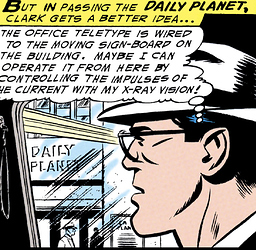 image1104×1075 901 KB
Clark is so clever! And Bruce disguising himself as Superman was genius.

I also have to smirk a little when Lois’ takes it on the chin. 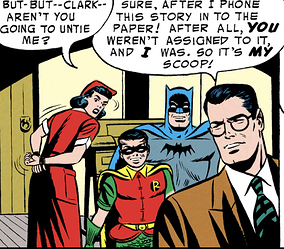 Is it just me, or could these two be twins? I suppose there are worse things that can happen to you, than being made over into the spitting image of Supergirl. I hope she and the hobo will be very happy. 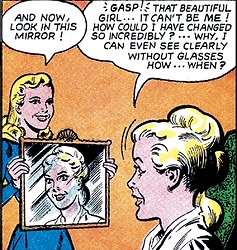 The cover of the first World’s Finest we’re reading is one of my favorites for couple reasons;

Very solid finish to the parter with Bizarro. We get the solid punch 'em, but Superman goes with the empathetic approach to solve the problem. Nice.