Opinions on the Multiverse

I did a quick search and didn’t see this topic elsewhere. I’m curious what other DC fans think about the concept of a multiverse and specifically how it works (or has worked) in DC. Alternate dimensions is one of my favorite sci-fi concepts. I think there’s so much potential for examining characters through that lens but also just so much fun that can be had with wild ideas. DC has a bit of a complicated history with the multiverse concept, what with getting rid of it in COIE and then Elseworlds and then finally reintroducing the multiverse but having it limited.

In my humble opinion as a long time DC fan and fan of the concept, I think they need to let loose and have a fully infinite multiverse again. Anything can happen and every story matters.

I’m curious what others think about the multiverse concept in general and how you think DC should (or perhaps shouldn’t) use it?

I love it. It’s great that it all happened and it all counts. Every story they’ve ever printed actually happened somewhere. That’s so much better than it all being ‘Elseworlds’ that didn’t really occur.

I prefer the DC approach to continuity, which includes the multiverse. For me, the quality of storytelling and relevance of the characters are improved by a reboot every ten to fifteen years. DC has done this through the multiverse, though they’ve perhaps done it a little too often recently.

I get frustrated with Marvel’s approach of one long continuity. It leads to convoluted storytelling just to give life to a character that might have grown stale. My favorite Marvel character, Daredevil, is a good example of this. An nonsensical labyrinthian story had to be constructed just so the writers could tell stories in which the whole world didn’t know Matt Murdock was Daredevil. Tapping into a multiverse or even shifting continuity are better ways to allow for more freedom with characters.

Both approaches have drawbacks and advantages. I like the DC approach. The single continuity approach was satirized really well in this panel. 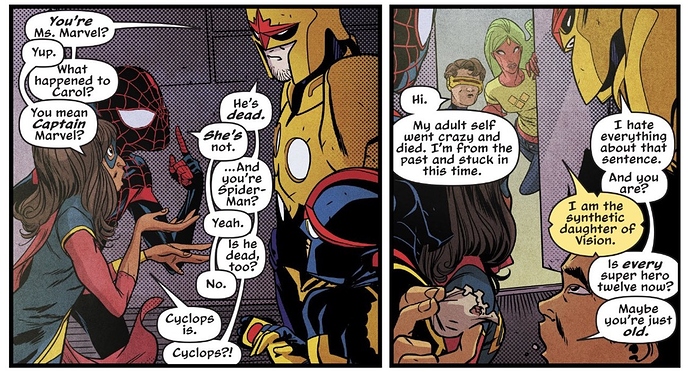 Yep, totally agree. The “everything matters” feel from a multiverse is one of the better aspects of it.

I absolutely love everything about those panels. lol

I both agree and disagree with you. After 80 some-odd years of interconnected story telling, continuity problems are going to be an issue. I doubt there’s any way to avoid it. And I agree that both methods of continuity management have their pros and cons. What I like about Marvel continuity are the soft reboots such as Iron Man being involved with the Vietnam War getting updated to the Afghanistan War.

What I disagree with is the reboots specifically, I guess. I’ve lived through all the DC reboots and while COIE was exciting at the time, reboots in general have lost their appeal. I do agree it can get you out of some character jams such as when a character is killed off. Ted Kord getting rescued from another universe by Booster Gold comes to mind as an example. Whenever a character has a major event (death, childbirth, identity revealed, etc.) it’s going to be messy to unwind no mater what.

I think what we might agree upon is that an infinite multiverse, as a story device, lets you have your cake and eat it too.

I love the concept so much! It is my favorite in comics. I just love the idea inside of comics and outside of it. In terms of books, it’s definitely a good way to tell storys you couldn’t before!

It was great in COIE for sure when you see evil Superman battling against original superman. I think it would be amazing to see the 5 different jokers in like a tv medium. Multiverses really allow for different depths of each character and allow the audience to see these characters we have known for 80 years in a different light.

I like it. Multiverses means more story-telling opportunities than not. It’s something that lets writers really flex their creative muscles without being shackled by continuity. Not to mention what can happen when worlds collide. Without the multiverse, we wouldn’t still have the OG Flash and, by extension, the good ol JSA.

The multiverse is the best “concept” in comics.

Can a true multiverse get confusing at times, sure. So many earths to keep track of.

With that said, the nice thing about them, is that when COIE happened, it basically turned everything before it into canon.

What the Golden Age heroes didn’t know when they were “the only game in town” was that they were on earth-2. They thought the were earth-1. All these reboots, which I find mostly unnecessary, could easily be settled by a multiverse.

Sure, every new continuity “thinks” they are earth-1 but non of them actually are. There is in fact no earth-1, only earth-prime which is our continuity. We only find out, that at some point like a crisis level event, that the earth we thought was earth-1 is really Earth (insert number above 100 here.) it also means that every elseworld is just another earth somewhere in the multiverse. (Which could be cool) imagine multiverse crossovers. (Red Son crossover with Gotham by Gaslight, for example.)

I personally love the idea, it gives writers a chance to play around with characters and see what could happen if things changed for the better or worst. The best part is always seeing something from that world making it’s way into the main cannon.

Have you ever read the elseworld Amazonia? It is fuckef up.

I’ve lived through all the DC reboots and while COIE was exciting at the time, reboots in general have lost their appeal.

I think the multiverse is a natural way to handle a reboot. Imagine if Flashpoint ended not with Barry arriving in an altered version of New Earth, but rather in some other parallel universe (possibly even a branching one created by the time travel shenanigans) that now becomes the main DC universe. Meanwhile, New Earth becomes the equivalent of pre-Crisis Earth-2 and keeps on trucking along in a handful of books. DC could’ve looked out for old fans even as they were bringing in new ones.

I love it, when multiversity came out i went nuts. The idea of multiple earths and multiple dimensions is very realistic. All of it is so fun, especially doppelgangers, gotta love science. Especially hypertime.

As a concept, I think it the best way to go with comics. It lets writers take chances, good or bad, and gives a mechanism for undoing those things.

It’s always fun when they have an event to try and make sense of it all, giving us concepts like hypertime. When somebody succeeds in making sense of past inconsistencies, it’s pretty cool.

I have always enjoyed the “multiple universes” employed by D.C. We can have a universe where the Trinity gave their lives to defeat Darkside-where a new era of super-heros begins, another where Jonathan Kent and Damian Wayne have taken on their father’s mantle’s, one where Hitler’s Germany won WWII, etc. The occasional interactions between the different worlds always makes an interesting story (eg. the story where the Luther’s of Earth 1 and 2 switched places and were able to defeat the other’s Superman. So much better than just a “What If” 1 off story.