Welcome, @ObscurityofDCClub and other members of the DC Community! Welcome to Obscurity of DC’s fourth Ultr-Obscure Book Club! This week, we’ll be focusing on… 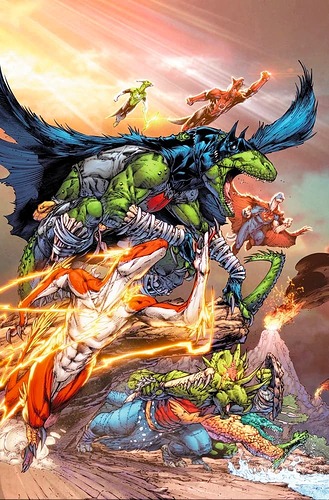 Not-so-brief description from dc.com: You know the story: an infant escapes the destruction of its home planet and is deposited on Earth to be raised by human parents. A goddess from a lost city defends truth. A Tyrannosaurus rex dons the visage of a bat to strike fear into evildoers’ hearts. This heroic trinity, alongside a league of other super-powered dinosaurs, join forces to save a prehistoric Earth from the sinister machinations of Darkseid. Wait…what? Okay, maybe you don’t know the story. So join us and bear witness to a brand-new-yet older than time-adventure and experience the Justice League as you have never seen them before!

Here’s some appreciation for the lettering of #1

The “HaHaHa”s for the Joker are tried and true, but are still very effective.

I love this introduction. It feels like a new Super Smash Bros. character was introduced.

The letters jumping outside of the word balloon do a great job of emphasizing Batsaur’s pain.

I love the lettering following the batarang.

This is one of those titles that I approached with skepticism but ended up really enjoying. I don’t have any idea how they managed to pull off a dino Justice League, but they somehow took a very silly premise and make it into a great run. There was still a lot of silliness in it, but somehow there was enough gravitas in balance to make it all work.

Here’s some appreciation for the lettering of #1

I didn’t think about this until you pointed it out. It definitely added to the story and the setting in a big way.