Our flair this week: 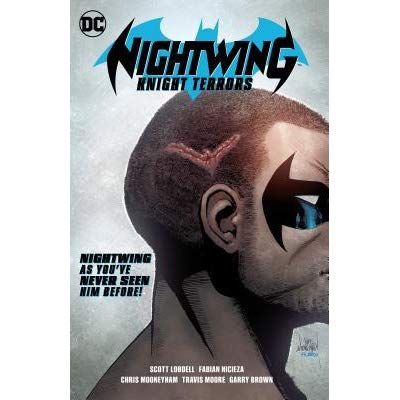 Oh, I’ll definitely be looking at this – time to see what all the fuss and wailing and gnashing of the teeth is about.

Oh, I’ll definitely be looking at this – time to see what all the fuss and wailing and gnashing of the teeth is about.

This will be my first time reading this, as well, and I’m a little nervous!

I actually think it’s relatively well written, it’s just not a Dick Grayson Story. It’s a story about cities when their hero is missing.

I’ve already read the first couple of issues and it’s not as bad as the reaction made it out to be. It’s still graphic literature done by true professional comic folk.

Maybe it just went on too long?

Is this your first time reading Nightwing: Night Terrors?

I liked the relationship building between Ric and his favorite bartender.

I was very amused by the Scarecrow not recognizing Ric because he smudged black stuff on his face.

How did you feel about Ric Grayson (in the volume, not generally speaking)

He’s okay. I would find him more intriguing if he was a new character and we didn’t know anything about him. As it is, I kind of find myself just waiting for him to figure it all out.

How do you feel about Ric Grayson generally speaking

This is the only volume I’ve read so far, so we’ll see how it goes. For now, see my answer above.

How do you feel about the new Nightwings

I thought they were a little lame for the most part. I did like the fire deputy guy, though.

How do you feel about the title: Knight Terrors

I don’t have strong feelings either for or against. It’s about a Batfamily character and features the Scarecrow, so works for me.

Is Scarecrow compelling and/or used to good effect?

Yes, I thought his role was interesting. Not sure what his overall plan was other than start some ■■■■, but I liked seeing him interact with “patients.”

Should we keep reading the series?

I vote yes, I’m a completist and I want to see how the end of Ric and the return of Dick is pulled off.

I kinda hate the Ric look, and that probably sours me to the story more than the actual plot does. Furthermore, this “amnesiac hero” territory had already been explored by Scott Snyder in the wake of “Endgame,” and I don’t think enough time had passed to go down this route again, even if it’s with Dick this time instead of Bruce.