Hey everyone, thank you for joining us this week. As always, I’ve chosen 5 titles which are both good but also important to DC in some way. This week we are reading

Batman #50
It’s the wedding you never thought you’d see! The Batrimony is real as Bruce Wayne and Selina Kyle are set to tie the knot in a can’t-miss, extra-length milestone issue that will reshape Gotham City. All their friends (and a few enemies?) will be party to a comic book coupling for the ages.
Superstar scribe Tom King officiates the sure-to-be-offbeat nuptials, joined by an all-star lineup of guest classic Bat-artists doffing their hats to the lucky couple in a series of pre-wedding flashback scenes sure to set the romantic mood.
Big Picture: It’s a wedding!! Also it is directly followed up by Catwoman #1

Catwoman #1
The wedding night’s barely over, but Catwoman’s back on the streets, this time to expose a copycat who’s pulling heists around Gotham City. As Selina cracks the whip on her former criminal cohorts, she’s attracting unwanted attention from one of Gotham’s most dangerous groups. The mob? Nope. Try the GCPD. And as if the Bat-Bride didn’t have enough problems, don’t miss the debut of an all-new villain determined to make trouble for all nine of Selina’s lives. Don’t miss the start of an all-new monthly series written and illustrated by Eisner Award-nominee Joëlle Jones!

Big Picture: Catwoman’s new adventure is well worth it both as a follow-up on Batman #50 but also as a providing of the state of Catwoman’s Psyche. Can Catwoman be a hero? Find out AFTER you read Batman #50

Man of Steel #6
The fate of Lois Lane and Jon Kent is revealed! Metropolis’ survival hangs in the balance! And Superman must somehow put an end to Rogol Zaar’s rampage! It’s do-or-die time for the Man of Steel in the final chapter of this explosive miniseries!

Big Picture: Jon and Lois’s current status are important but the series also sets the stage for both Superman #1 and Action Comics #1001

Green Arrow #42
It’s Parasite Season for Green Arrow. The Emerald Archer must hunt down the power-sapping purple powerhouse—alone, in a maximum-security prison, running low on arrows—and after the tapeworm terror has feasted on a buffet full of metahuman criminals. Prison reform, Ollie? You shoot arrows in people; that’s straight up medieval!

Big Picture: This issue is great at world building the Hall of Justice. Oh yeah, the hall of Justice has a prison.

Justice League #3
John Stewart: Ultraviolet Lantern? Believe it! Under the influence of the Ultraviolet Spectrum, John Stewart engages in some ultraviolence against his teammates Flash, Wonder Woman and Aquaman. Meanwhile, the rest of the League investigates the scene of the fallen Source Wall fragment, and encounters not only a horde of giant monsters, but a pair of longtime archenemies using stolen Atom technology to literally get under their skin. Best to stock up on Cortizone for that sort of itch! All this and…the Turtle? Yep.

Big Picture: This issue expands on the big reveals on last issue in an important way

Honorary Mention (Harley Quinn #45 is the start of a new run where Harley becomes a female fury. (Not in continuity I think) 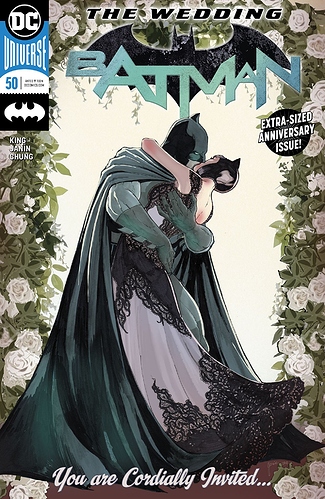 Well, I read it but I am super confused at the ending but at the same time it’s Batman so makes sense.

MoS and JL for sure. MAYBE Batman 50

@jill The big thing about 50 is that Bane has been setting this up in order to break his back. He knows if he breaks Batman’s actually back. Batman just gets up. Batmans Psychological back though… That’s the idea

Here is my Batman #50 review
https://www.dcuniverse.com/community/boards/comics/new-to-dcu-batman-50-revie

Ohh @Nathan I haven’t gotten around to reading all of the comics leading up to this one, so I was a bit confused. Thank you though

The Man of Steel #6: conclusion

First to respond the questions above: I’m ok for now with having Jon and Lois wisk off with Grandpa El. It’s not like Jon didn’t experience life to the fullest as Jor-el indicated during the 5 years that elapses for the travelers. I admit conventional science would have had the OPPOSITE happen; ie, Lois and Jon return only aging a few months while centuries passed on Earth, that is I believe the usual tale of hyper / beyond light speed travel.

Concerning the resolution of the Rogal issue, phantom zone seems fine as a stop gap. This gives time for the Supergirl Odyssey through space in search of the truth of his tale and Superman time to figure out how to win this battle.

I liked the use of split time narrative. It felt like Superman was reliving all this in his mind as he fought.

One thing I don’t get is: just what was Superman’s plan in space to win? Guess we’ll never know thanks to Supergirl.

Superman comics from here on out are done in the following manner.
Supergirl: An odyssey to find the answers. She takes Krypto and his axe along for the rife
Superman: AKA The Unity Saga. The continuation of the Rogal Zar storyline and Jon and Lois’s trip.
Action Comics: The Daily Planet, Lois, and the fires. (This is the better of the two)
Adventures of the Supersons: Pre-Man of Steel Supersons journey.

Wow, this is intense stuff! One of our fav GLs going rabid with purple evil power, pre white martians jumping out of glass pods in a forbidden area of the ocean, and the final scenes of Joker about to try out his new Slicer and Dicer on Hawkgirl (woman?) …and then…this… 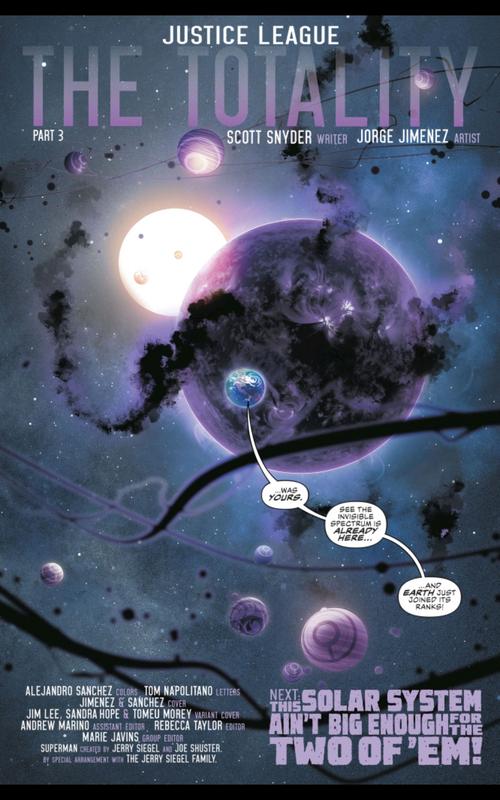 Yeah, Justice League is like this all the time. Even the slowest moments have massive reveal and it’s SO pretty