This week on DCU Book Club, we have a conundrum of only 2 titles that we are reading. So, I went through rebirth stories that I’ve never read that I really want to read which are important but are forgotten with so many stories in rebirth.

So this week we are reading

Batman #51 ← We’ve seen how Catwoman reacted to the break up. How is Batman handling.
Justice League #4 ← The Slow Force and Ultraviolet forces are explored more and also more about Grodd’s past.

The Lazarus Contract will be finished later!! 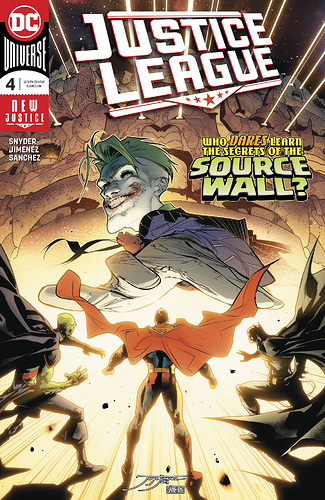 Justice League #4 first, maybe I’ll finally understand why Baby Turtle is being carried around by Grodd…

HAHA. I’m pretty sure its so he can control the slow force. What you will find out is that the origin of the Turtle and the Turtle line is very important to baby turtle. No more spoilers.

I also feel like its a baby hitler sort of scenario. Would you kill a baby dicatator?

Like the first third of a great opera, the conflict / challenge to the heroes is now fully fleshed out! You can almost hear the pit orchestra come to a loud crescendo as the slow force comes to 100% and Sinestro’s mighty purple army arises!

“Fool me once”…the heroes weren’t ready and couldn’t see what was coming, much like the 9/11 attack of our current culture. But now hopefully they can collect their wits and fight back…and win someday? Hard to say, battle that starts here issue #4 continues today!

I’m frankly not interested in a batman family movie, because the movie wouldn’t likely be that interesting. The highlights of the Batman family is the diversity of characters and the characters likely wouldn’t work well as one big movie. Generally Batman centered events struggle for this exact reason. Prelude to The Wedding series was so good because it focused first and foremost on the Bat Family and Villains Diversity.

@Donte also please don’t copy and paste that sort of stuff. Just make your own post instead of distracting other post.

@donte531 Hey there! I’m going to be removing the posts you’ve made across the forums, as it definitely counts as spam. As @Nathan.Payson said, feel free to make your own thread to garner support for any ideas you have, just don’t spam them. This goes against our community rules, which you can look at here: https://yourdcu.com/cmg

This thread is the place to be apparently

Batman #51 - pretty sure I read this when it came out a year ago. It seems wierdly disconnected from the previous issue fyi.

ALSO! DCU Book Club Week 12 is going to be late because it was my birthday yesterday so I didn’t have the time to work on it.

Titles for next week: