New Age of Heroes Thoughts and hopes for future appearances

I remembered recently to check for the NEW AGE OF HEROES on here. When these titles were launched I was on a little financially imposed break from comics, so i was unable to read them.

Unfortunately I see now that most of the titles were cancelled around the year mark. But as we know, comic characters live on, so who were your favorites and who do you hope shows up again…And where?

I read the first Terrifics trade and just started the immortal men, and I look forward to some new heroes (especially ones outside of the bat family) 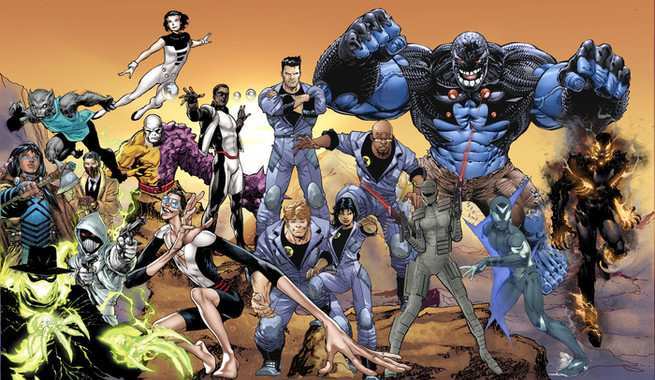 I love the Terrifics and Sideways, and the rest I can take or leave. Although, admittedly, I put together a pitch for a comic I called “Suicide Squad 1945” that had Damage in it… I don’t know. I like them all, really. More so than I probably should.

My favorite New Age titles were The Immortal Men and The Terrifics.

As for where these characters could go…

The Terrifics and The Silencer are current titles, so hopefully they’ll keep tickin’ along for a good long while.

Sideways will probably end up in Young Justice or a Titans team (just speculation).

Damage could…be a Titan (not teen, obviously) too? He certainly qualifies from a physical standpoint.

The Immortal Men will hopefully pick up from where they left off. Presumably in a new volume.

It was a fun group of books.

Silencer got cancelled in April I thought?

Terrifics: Ongoing
Silencer: Maybe show up as a villain?
Sideways: Hopefully moves to Teen Titans (No way Bendis is using him)
Damage: Probably get a reboot in 4 years.
New Challengers: Dead on arrival
Immortal Men: Hopefully gets rebooted after Crisis 2020
Brimstone: Really liked but felt like a miniseries.
Unexpected: Dead on arrival

I thought The Terrifics was the best title from the line. Lemire is consistently good.

The ads for that launch were pretty bad. Artwork all seemed dated and none of the characters struck me as interesting. Also, this launched out of Metal, didn’t it? I hadn’t read Metal at the time, but I have now and almost none of those characters even had a minor role in story.