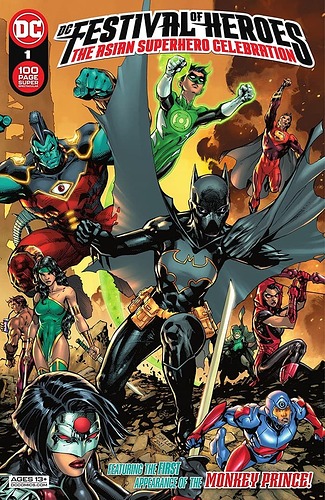 We all have our own unique tastes as fans, even here at DCComics.com, so we asked members of our writing team to share their personal three favorites. Look for a different top three every day this week! Our Wednesday list comes care of our newest contributor, Donovan Morgan Grant.

2021 was a terrific year for DC Comics, where nearly every character had momentous adventures released from month to month. Plenty of wonderful specials from the 80th anniversaries of Aquaman and Green Arrow to the release of the Wayne Family Adventures back in September, as well as lots of new TV and movies that took the stage at DC FanDome. Any number of releases could’ve made my personal top three list, but I’ll settle on what immediately comes to mind and reaches closes to my heart.

DC also put a spotlight on its pantheon of heroes and characters of Asian descent last spring with the release of the 100-page DC Festival of Heroes comic. DC Festival of Heroes told stories featuring many of DC’s classic and beloved Asian characters such as the Connor Hawke Green Arrow, the affable Super-Man from China, Kong Kenan, sword-wielder Katana, the Ryan Choi Atom, the deeply conflicted Cheshire, and—my personal favorite—Cassandra Cain’s Batgirl.

Sadly, these heroes have not always had the best exposure, despite many of them being well received by the fanbase and creators. DC Festival of Heroes at last provided these characters with the stage they deserve, reminding readers why they matter by presenting them in the best of lights with equally top-level Asian talent including Mariko Tamaki, Dustin Nguyen, Gene Luen Yang, Greg Pak, Alyssa Wong, Marcus To, Francis Manapul and Sean Chen among many others.

To see Donovan’s top 3, head over to DC Comics!

What’s your favorite comic ever? Let us know in the comments below!