Mother Panic as the new Batwoman

Obviously, the most logical thing for CW to do with Batwoman is cast a new actor in the role and keep going with Kate Kane’s story. Not only is there no time to introduce a successor, but there is an active storyline that really only works if the protagonist is Alice’s sister and Bruce Wayne’s cousin. So it goes without saying that S2 Batwoman will still be Kate Kane. But thinking about how the network would handle this situation if it was happening after several seasons, like when Stephen Amell was convinced to come back for one more shortened season to wrap up the story on Arrow, I’m convinced that Violet Paige (aka Mother Panic) would make a pretty awesome Batwoman.

Like Kate, she’s a rebellious member of Gotham City’s wealthy families. But her backstory is totally different, as is her motivation for crimefighting. Violet comes back to Gotham with a mission not unlike Oliver Queen’s, and has no interest in joining the Bat family. I think she’d make a great foil for Kate, and if she was introduced late in the game like Mia Smoak was, she’d be a great choice to take up the Batwoman mantle if Kate decided to leave Gotham.

Since Mother Panic started, I’ve always thought she’d make an interesting addition to the Arrowverse. But under slightly different circumstances, I could see her eventually becoming Batwoman.

I don’t know about her becoming Batwoman, but I would love to see Mother Panic on the show, absolutely!

At the very least, she could be Batwoman’s Azrael!

I’ve never seen Batwoman, but this is all fascinating in a trainwreck sort of way. Hopefully they can figure SOMETHING out. Those showrunners must be scrambling right now.

Well since they are still several weeks minimum to opening up shooting, and if they’re going to be shooting in Canada…we’ll that’s off the board for another month at minimum. I am sure they have agents calling and resumes landing in their inbox at a constant stream.

Since the split is now being reported as “mutual”, I’m sure they have been lining things up for a few weeks, probably including scheduling the shooting schedule to not have to shoot Batwoman herself, for a long as possible.

Today’s DCDaily was interesting. Not sure how long ago it was filmed, but it’s kind of obvious everybody, including Clarke was told to steer clear of any questions or answers regarding Ruby Rose even in the role of Kate, just as a matter of course. And it was pretty good media coverage that they had Rachel Skarsten on, and really pointing out how integral Alice is as a character. And one could see from the spin of making Alice as much a key central character to the show as Batwoman. And given what the talked about Alice and the other main villain for season 2. One could almost see how the production team may have been hedging their bets on having a new actress as Batwoman for season two.

I’m not caught up on Batwoman, but is it for sure they are bringing it back for a 2nd season? I read somewhere the ratings were bad and, if true, losing Ruby would almost seem to be the nail in the coffin, right?

I hope not, just wondering.

It got renewed for a 2nd season earlier this year. Any “news” reporting that it might’ve been at risk of being canceled came from unreliable sources cough We Got This Covered cough

The ratings for Batwoman were very good. It was the third-highest rated show on CW, I believe.

Good to know. And, I don’t even bother with We Got This Covered! Lol!! It was a while ago that I read that about the ratings, but I hadn’t followed up. Figured this would be a really good place to get the info. Thanks for the response.

Ruby’s decision to leave means that they’re changing the actor, not the character.

Yeah, I’m aware. That’s why I prefaced my comments with “it goes without saying S2 Batwoman will still be Kate Kane.” I just thought it’d be fun to imagine another possibility. 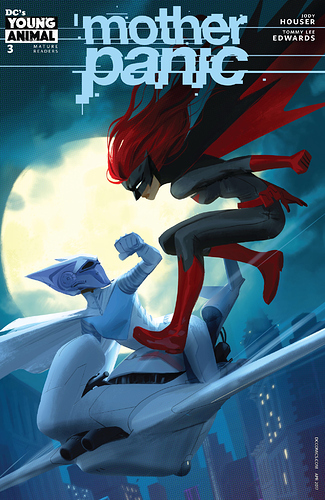 Totally forgot Mother Panic and Batwoman squared off until I started a reread. Now I really want her to show up as a foil for Kate at some point.

@mrmiracle, it’s great to see another Mother Panic fan. Such a cool character. I hope DC brings her back in some way.

Now that we know they’re replacing Kate Kane on Batwoman, this is just a reminder that the perfect character exists in the DC Universe. I know she doesn’t resemble the character description that’s floating around the internet, but Violet Page/Mother Panic would make an amazing Batwoman.