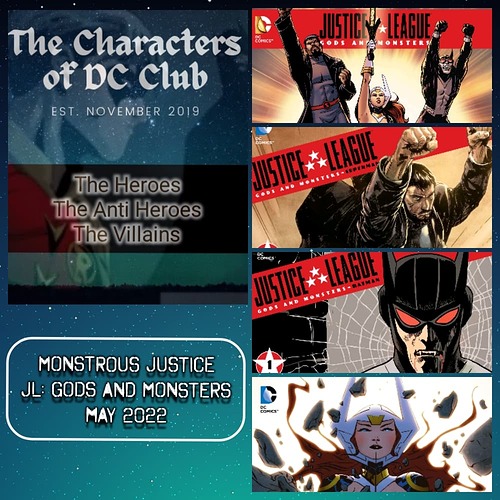 Hello all and welcome to C of DC’s May session. This month we will be taking an in depth look at the Trinity of Superman, Batman and Wonder Woman but not as you may have seen them before. For this is not the Trinity of Earth Prime, or Earth 2 or even that of Earth 3, where the Justice Lords hold sway…

Welcome to the Justice League: Gods and Monsters universe home of…

Together they have banded together to form the Justice League!

Before we get started remember that to joinCHARACTERS OF DC all you have to do is click the link!

As always I will be posting the week’s readings every Sunday in May starting with May 1st along with a thought or question to encourage discussion.

On tap for June: The Freedom Fighters will be in the house!

And here is our first reading for this week @CharactersOfDC.

As well as a bit of info on this version of Superman whose arrival on Earth happened a tad bit differently.

My question for this week is:

What did you like and/or dislike about this version of Superman?

I didn’t know there were comics of this too!

I guess I probably should’ve assumed, but I didnt!

Yep, there are comics for this or rather prequel comics. I thought it might be fun and a bit different to dive into them this month. I do like exploring alt. universe versions of characters once in awhile.

This is my favorite version of Superman. I love it.

This is my favorite version of Superman. I love it.

Why is this your favorite version?

Superman here is so badass.

I do not like that they gave him a name. Such a key part of Gods and Monsters is that this guy is Superman first instead of Clark, and a key part is from the movie we never know his name.

Still I do love the family dynamics. I think Valentia was holding a grudge contrary to her narration based on what she told him when he used his powers to fight the sheriff. I am wondering if his dad did not actually lose his temper but felt his son leaving was in Hernan’s best interests.

From the movie the basic implication of Superman’s motives is he wants to rule to stop suffering and a disillusionment with the American Dream. This really adds to the second part. Without using his powers he was a success due to the work ethic and using opportunities part of the dream that his dad taught him. Now he sees opportunities to rule and wants to use them to save the world from itself like a police force America is now known for being throughout the world.

I read this a little while ago and I am hoping to revisit it. I had seen the movie before reading the books. Mostly because I had no idea said books existed.

But from what I can remember, I liked that even the Son of Zod would be a force for good when raised in a home with moral values. I liked how this Superman was more brutal. I also liked how the accident with his sister was his “bad day”. The day in which he learns with power comes responsibility… trope-y, but I liked how it unfolded.

I’m of the same mind on that.

Still I do love the family dynamics.

I really enjoyed that part the most.

I think that’s what I like the most about him. Even the Son of Zod can do good and be a force that stands against all the evil in the world.

But from what I can remember, I liked that even the Son of Zod would be a force for good when raised in a home with moral values

I really loved this aspect. I love when a writer takes a reader’s expectations and turns them on their head like this.

For our next bit of reading we will be taking a look at this universe’s Wonder Woman, Becca of New Genesis.

I really enjoyed that instead of Wonder Woman being an Amazon she was instead an exiled New God. Made for an interesting dynamic and story. What are your thoughts?

They had me with her wielding a sword…

These books I revisited. I like how she is looking for hope. How she laments having to fight.

This was my first Dr. Psycho. No mental powers and very tall.

In the movie, i believe there is an error in the wedding scene.

Speaking of the wedding. I want to see if we can solve this fan debate.

Was Darkseid actually good in this universe or did High father simply beat him to the punch? I think he was evil, as Granny had her own sword there ready to go.

my head canon has it that Darkseid was willing to give it a chance.

Was Darkseid actually good in this universe or did High father simply beat him to the punch?

You know it was a bit unclear. My mind automatically went Darkseid is…evil? You know Spock raised eyebrow look? That was me while reading this one.

. I like how she is looking for hope. How she laments having to fight.

I really liked that too.

I liked how we see Wonder Woman in the backdrop of the past.

Fourth World terms are dropped smoothly, but on the assumption the reader will know what they mean.

I am glad her first experience on Earth was more about kindness. Something more harsh would have been dealt with, given her strength. I still think she would seek out hope. Her violence might be a little more judge-y. But still inspired by the good of us filthy humans.

And here is our reading for this week.

And here is a link to more information on this universe’s Batman for your perusal.

Batman as a vampire? There’s a joke here somewhere. Anyway What did you think of Kirk Langstrom in the role? Was it interesting or are you more of a “only Bruce Wayne can be Batman and no one else” type of person?

Me…I’m all for it. I really enjoy seeing other people in the role besides Bruce Wayne. I think it brings interesting elements into the story that might not be possible with Bruce in the role and, perhaps, allows for a writer to have a bit more freedom from readers expectations as well. What are your thoughts?