Meta Madhouse - Superman's Aliens! Round of 8

Ready your hearts and minds, super fans- the latest eliminations of Superman’s Aliens are now posted!

Who was able to sustain enough damage to make it to the next round? You’ll just have to head to the News section to find out!
https://www.dcuniverse.com/news/meta-madhouse-supermans-aliens/

Remember fans, this is a friendly fight! Now that the results are in, what are your reactions? Are they just, or just another victim of life’s ongoing popularity contest? Let us know in the comments below!

WELLL ch’p is really a zombie. he never really dies. ;_; 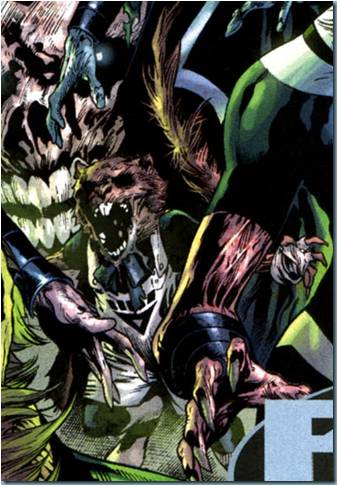 Ch’p was disqualified for being too powerful. Darkseid was threatening to dropout of the tournament if Ch’p stayed.

Prediction: Krypto defeats Darkseid in the final round. Even the God of Evil can’t withstand an adorable super-dog. I’m pulling for Nightwing in the long run, but Krypto had better be at least a semifinalist for this whole thing.

In other news, this was not a good day for the Green Lantern Corps.

All lanterns eliminated in one round. Kinda hoping Alan Scott wins in the shazam bracket now.

Did they ever announce the round of 16? I must have missed that one.

Krypto is about to drop out vs supergirl.

Too many people want to see power girl vs supergirl

Also, I’m sad that Supergirl has to fight Krypto.

Krypto v Supergirl. I’m laughing at the hoops some folks are gonna be jumping through to justify their pick for this death match.

Darkseid will prevail in the end, he is to powerful & to ruthless. (We know he survives well into the 30th century, see Legion of Super-Heroes “The Great Darkness Saga”.)

I just hope in the pre-match intros Ms. Kara Zor-El gets her intro from Gregory Noveck “In the words of the immortal Jack Parr…'here they are, Power Girl!” (See “Dinner with DCU and Special Guest Kevin Conroy” from the Special Features section of “Superman/Batman: Public Enemies”

How about giving us the vote tallies from the daily bracket match-ups?
Seeing the voting balance for various match-ups would be interesting.

Darkseid should win it all, unless people think a single kryptonian can beat him. Not even Superman can beat him 1 to 1, and yes I know Supergirl \ Power girl is more powerful than Superman, but she would still need the whole Justice League to bring him down, even momentarily! But, everyone is treating this as a popularity contest, so Supergirl \ Power girl is probably gonna win, even though she shouldn’t.

“Who would win” is entirely too subjective and circumstantial an inquiry to adequately judge by just voting one way or another, so I’m voting based on the character I would like to see win if the two somehow came into conflict in an actual story. If we’re going by pure raw power and fighting ability, the bracket winners should be Highfather, Doomsday, Deathstroke (Maybe Orphan. Maybe.), and the Spectre (or potentially Trigon), at which point the Spectre or Trigon would eat the other three for breakfast.

In any fight where I cannot find any way of justifying the character I’d be rooting for actually winning, I go for the one who’d win (this is why I picked Power Girl over Kilowog even though I like Kilowog better), but in fights where that character might be able to win under specific circumstances, I’ll choose the one I like better even if they’re at a disadvantage. Any Kryptonian is powerful enough that I wouldn’t count any of them out against anybody but the Spectre or Trigon (who I’ll be voting against on principle because I think they’re too overpowered to fairly compete in a contest like this).

I see the argument for the Spectre, with everybody but Darkseid. The Spectre will show Darkseid all the death, horror, even in his own life and Darkseid will respond, “And?” Of every character in the DCU he is the most ruthless, cold blooded and single minded his cause is just.

Trigon… meh. His teenage daughter took him down.

I have to agree. No matter who you want to win, Darkseid is gonna beat them in a 1 on 1 match. He lives outside of this universe, and he’s immortal. Highfather is the only one who had a chance to beat him, but he wasn’t popular enough to win.

Someone should have specified if this was a 1 on 1 fight, or if this is a popularity contest. Also which version of the character is fighting in the contest.

Darkseid wins it all, except a popularity contest. I say this as a diehard Superman fan! Supes is the bomb! But, he can’t beat Darkseid by himself. It would take most of the Justice League just to stop him momentarily, no way Supergirl or Powergirl wins 1 on 1 against Darkseid.

Doomsday should of beat Martian Manhunter

I’m sorry but how does Martian Manhunter defeat Doomsday? He killed superman, even in death of superman he defeated Martian Manhunter. How??? Also how does Darkseid beat Parllax? (I totally misspelled it’s name but you know who I mean). Darkseid has died, the other is the living embodiment of fear. The Guardians couldn’t even beat him, they had to split him up and put him into 4 different lanterns just to contain him. That I don’t understand. Lobo will win this, he can’t die. Literally. He was banned from heaven and hell and from dying.

@Harper95
MM could phase into Doomsday and solidify, which would explode Doomsday from the inside.
Darkseid has no fear or remorse for anything he’s done. Darkseid is “The god without fear.” Parallax has got nothing to work on with Darkseid.
Darkseid isn’t dead, he is still alive and plotting in the 30th century. (See: The Great Darkness Saga)
The Guardians are peanuts compared to the New Gods.
As for Lobo, surely you jest. One Omega Beam from Darkseid through Lobo’s upper palette and it frontal lobotomy with a chainsaw. Darkseid don’t even break a sweat.