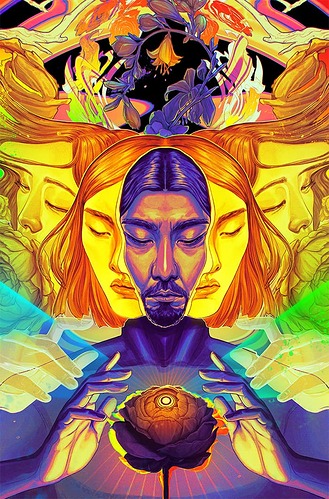 Last year, the world of Milestone Media made its long-awaited return to comic shelves. Static, Icon, Rocket and Hardware live again in a shared universe of their own, living the kinds of stories they were created to tell. In 2022, Milestone is only getting bigger. Make way for Earth-M.

The “Earth-M” line is a collection of new concepts and characters created by original Milestone cofounder Denys Cowan and current Milestone relaunch shepherd Reginald Hudlin, both inspired by and nestled within the Milestone universe. In time, these new heroes may meet their Milestone forebears, but now is the time for Milestone to do what it was always meant to through Earth-M: broaden perspectives on the superhero genre as a whole with ideas you’ve never seen before.

One of the first titles in the Earth-M line will be the six-issue limited series Duo, the story of two lovers, both alike in scientific accomplishment, merged into one body through a nanotechnology experiment. While this has granted them extraordinary powers, it has also erased the boundaries between them. Can a love survive when all things must be shared and independence lost? We spoke with author Greg Pak ( Action Comics, Batman/Superman ), penciler Khoi Pham ( Teen Titans ) and inker Scott Hanna (too many credits to list) to learn everything we can about this exciting new title.

To read the interview with Greg Pak, Khoi Pham and Scott Hanna, head over to DC Comics!

Are you excited to see a superhero from Earth-M? Let us know in the comments below!

Are you excited to see a superhero from Earth-M?

TBH, I’m just excited to see anything from Earth-M, as I remember in 2015 when Earth-M was announced at SDCC as an OGN line. Since then, I’ve always wondered “Whatever happened to Earth-M?”

As for Duo, sure I’ll check it out at some point (especially since it has a great creative team behind it). All of the Milestone stuff I’ve read so far has been pretty rad, so why not?

x. the more Milestone, the better! Looking forward to Duo’s May release .x