Master Thread: "I'm New to DC Comics! What Should I Read?"

There certainly are things that could be done better. I don’t think that the site completely fails at being accessible to new readers, but there’s real room for improvement: taking what’s already working and refining it to work better.

On top of that, what I’d really like in the forum is the following: a pinned thread in the Essential Reading section that acts as the official recommended reading topic. The first post would offer an introduction and would provide links to all of the following posts. Each subsequent post would highlight a particular character or team and offer recommendations (possibly in wiki form to allow additions, but the posts would have to be monitored carefully to ensure consistent formatting and to protect against vandalism). The topic would need to be closed from regular discussion to ensure that it doesn’t become cluttered and unusable.

The main problems in the
Essential Readings sections
Are

Few know it exists. It simply is not part of the drop down list

A lot of non essential reading

No real recommendations
Other than
The master thread

Few know it exists. It simply is not part of the drop down list

It appears on my screen to the right as one of the “Helpful Resources” when I’m looking at any forum in the community. It’s right below the Community Guidelines and FAQS links.

Agreed, which is why I think we need a new thread that’s carefully designed. Anyway, we probably need to stop commandeering this thread to discuss the matter.

Sorry I’m late, but Super Sons is fantastic. I’d recommend that book. It’s fun, well written, and the art is fantastic . It’s not overwhelming for new readers. Hope you find something you like. Cheers!

Jesus, scare the newbie off why don’t you guys. A Harley Quinn head dive needs more attention! Truss as the kiddies say…

Titans would be my next stop on the bus. Then if you like the serial set up, Doom Patrol or Swamp Thing. This is considering what you put down as genre preferences.

As for animation destination one should be Death of Superman or Doomsday. Followed up by Dark Knight 1 and 2. Any Justice League Dark! Son of Batman, Batman vs Robin, into Teen Titan Movies…

Then Hit the JL series starting with Doom to Apokolyps War.

Then go back in time to the live action movies. Start from the beginning Superman, Batman, etc… to today!

Enjoy the journey… Read Crisis on Infinite Earths, it is a must! And enjoy all the great comics!

So I have been a long time comic reader and love DC, my wife… not so much with the reading. She loves all comic book movies and TV shows (dc universe and regular cable shows), but has never really gotten into reading comics. I cant think of where to start her off. She’s agreed to do a book club with me where we read 1 issue a week. Any suggestions?

Start with something that feels like a movie. For instance, there are two Superman origin stories that feel particularly cinematic: Birthright and Secret Origin.

Ask her which is her favorite character and start with an acknowledged run, or start at the origin of that character.

Or an interesting idea would be to start with a limited elseworld run like Injustice or Gotham City Garage where you can familiarize her with a wider cast of characters in the context of one story.

Those are great options! Thank you!

I didnt even think of that! Thats a good idea

Stephanie brown (she is also a robin) because she becomes spoiler

When I first started reading comics years ago, I started with buying Batman: The War Years 1939-1945, this hardcover really gives you a great introduction to Batman. It has some major keys like Detective Comics #27, which is the first appearance of Batman, Detective Comics #33, which tells you the origin of Batman, and many other great and Classic stories throughout the rest of the book. You can purchase this hardcover online, it’s pretty cheap

Another book I recommend for people who want to read classic Batman stories is Batman: A Death in the Family, it is a classic tale about the death of Jason Todd, this story really sets up the origin for Red Hood. And the awesome Jim Aparo artwork really makes this story special. You can read the full story here on DCU!

Horror: The Saga of the Swamp Thing

Those are fun recommendations, @TheRealDetectiveChimp! All-Star Superman would be right near the top of my list of recommendations for a new DC reader, that’s for sure.

Hello everyone. I’m new here. In your opinion which story lines are a MUST READ to understand the current DC Universe? Thanks!

I’m sure plenty of our users here can help point you in the right direction, but the Let’s Build a DC Comic Book Library might be a good place for you to start poking around!

There are two answers here

If we are talking about the current DC Universe

After Dark Nights: Death Metal, the DC Universe goes into a possible future, with the “Future State”, then to the Infinite Frontier

So that everything in the more than 80 year old history of the DC Universe actually happened.

Before the heroes and villains didn’t remember everything

But that series would be very confusing to a new reader

Here are the major
Starting points since that series ended 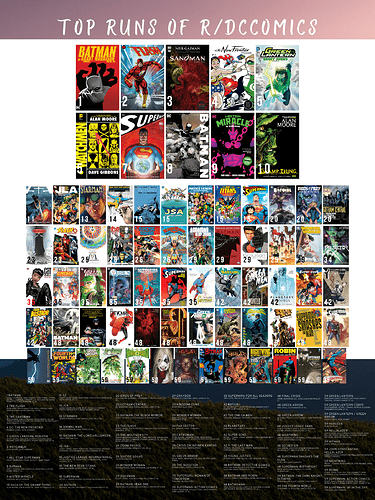 This is pretty close to what I’d consider to be the standard, community-approved “canon” of essential DC & Vertigo comics. It’s runs-only, so there are some key one-and-two issue stories that are missing. But aside from those, and with the “runners-up” included, these are pretty much all of the titles that I see repeatedly on almost every “Best of DC Comics” list. A new reader could do worse than simply picking a character or cover from this graphic that looks interesting to them and just start reading (heck, it’s what I did with Nightwing).

I’m curious what others think of this list. I’m less interested in the specific order that these were placed in, and more so in which titles made it and which didn’t. Is there anything super important missing? Or any titles on there that you didn’t expect to see included?