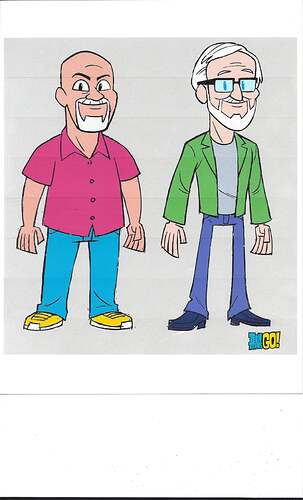 I’ve been warning my Facebook friends for weeks now that there was some very silly Teen Titans Go! news coming, and today’s the day I can finally let you know what it is.
A number of months ago, in the early days of the Pandemic, George Perez and I got calls from the Cartoon Network. They said they wanted to do an episode of Teen Titans Go! that actually featured George and me in it. Playing ourselves. And, if we agreed, could we do our own voice acting.
We both said absolutely yes!
But then we hit a snag. As I said this was at the beginning of the Pandemic and I wasn’t going to drive the 70 miles to Burbank to record my part. At that point in time nobody quite knew what caused it and I wasn’t leaving the house.
But you can’t put a good cartoon down for long.
I didn’t have to go to Burbank because Burbank, in a way, would come to me.
The sound equipment was shipped to my house and left at the front door. Noel and I brought it inside, and Noel, who years ago had done voice recording for Dreamworks Animation, set it up. Nobody else was here.
I was given the script - no, I didn’t write my part; I was just a guy named Marv Wolfman, playing a cartoon character named Marv Wolfman, asking you to accept my bad acting. George has done theater for decades, but I’ve got the acting chops of chopped meat. But as silly as it was to even think of putting us in the episode, I absolutely loved doing it. I really do love the insanity of Teen Titans Go! and I was thrilled to be on the show.
George did his voice recordings in Florida while I did mine in Southern California. We recorded our parts on different days, but somehow it sounds like we were in the same room.
The name of the episode is “Marv Wolfman And George Pérez” No kidding. That’s its real name. The episode airs on the Cartoon Network this coming Saturday, May 29, at 9AM PST - but check your local times. George and I will also be on a second episode sometime in the next few weeks. That one is called “Creative Genuises.” Seriously. I’ll let you know the date as soon as I do.
I want to thank everyone involved with this. That show is always very silly but kids love silly and this is a kid’s show. Hope you love it as much as we do.

Rad! Thanks a ton for the heads up!

Ya @TaimurDar, thank you, I had no idea this was happening, but I’m setting my DVR!

Check out clip that was just released! Right On!!! Ty for remembering me BLUE. Awesome @TaimurDar Thanks for the info!!!