So, I’m doing a month-by-month readthrough of a bunch of Post-Crisis series. I kinda had to back up to pick up a couple series I’d initially skipped. Specifically, John Ostrander really wants you to read his Manhunter series. So, OK, I’m reading that, and while I resent being forced to read it to understand what’s going on Suicide Squad, it’s pretty cool. When I get up to the 2000s, the Marc Andreyko one with Kate Spencer is on my list to read then, and I’ve heard nothing but glowing recommendations for that. So that’s Manhunter '88 and Manhunter '04 on the docket, but there was also the '94 series in between, which I’ve heard precisely nothing about.

So, my question is this: Does Manhunter '04 have anything to do with Manhunter '94? I think I spotted Mark Shaw or someone in his costume on one of the covers of the '04 series, but is Chase Lawler important? Is Paul Kirk? Clone!Paul Kirk? I know pretty much nothing about this legacy.

It sounds like you know more on this than I do, but from reading some wikis, I think, and I could very well be wrong, there is some connecting tissues between all the heroes calling themselves Manhunter.

I’m aware that they’re all (Or mostly?) connected through the Manhunter Cults introduced in Millennium (created out-of-universe to explain why the Manhunter robots look like Paul Kirk’s costume… I think), but that and the characters’ names are about as far as I go. The '88 Ostrander series makes an attempt at explaining Mark Shaw’s backstory, but the whole thing is so convoluted that even that’s still not very clear.

I think I’d probably have a better grasp on this stuff if the Millennium miniseries itself were on DCU.

Mark Shaw plays a small role in Manhunter ‘04. There’s some small mention of all the Manhunters but the 04 series tells you everything you need to know. The Ostrander run starts and ends relatively strong, but is nowhere close to the quality of his Suicide Squad. Millennium was a fun crossover at the time but only has Mark Shaw in about 2 panels if that. It’s much more of a green lantern story. The ‘04 series works similar to James Robinson’s Starman- you don’t need to know the history to enjoy it.

Thanks! I’ll keep that in mind.

As others have already mentioned, the various Manhunters are unrelated, for the most part. The Millennium crossover (1987) attempted to tie together the various Manhunters that existed up to that point (Paul Kirk, Dan Richards, Mark Shaw) via the Manhunter cult. You can read about their histories in Secret Origins #22, which is available on DCU. I think Paul Kirk’s costume (the Walter Simonson version) is one of the all time great costume designs.

After Millennium, came several other Manhunters: Chase Lawler (Zero Hour), Kirk DePaul (Power Company) and Kate Spencer. Of these three, only Kate Spencer seems to have made any major impact. 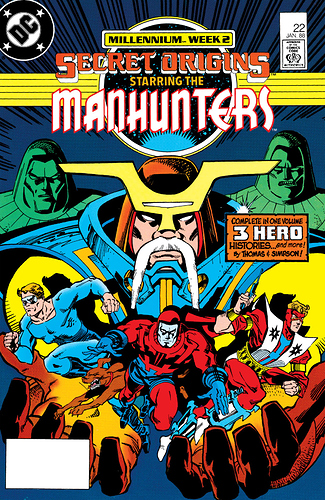 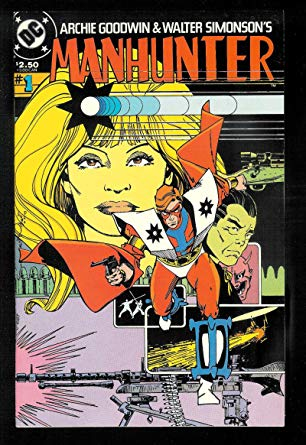 If you’re looking for a good read on Kate, she has a small second series in streets of gotham, i really liked her in that.

I have always thought the Paul Kirk Manhunter was grossly underated. Loved it as a kid and when I finally got to read the entire run , a few years ago, it impressed me even more.