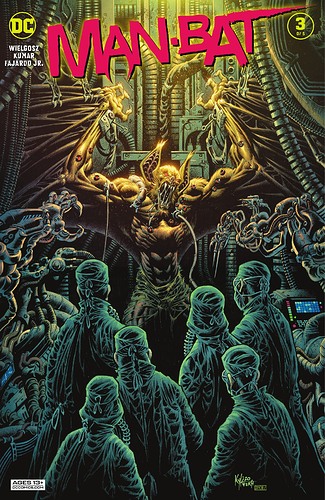 Man-Bat Vol 4 31988×3057 1.51 MB
We getting close to end is time for review. Man-Bat is trapped in the therapy office with Harley Quinn here others see black and white, Harley sees where a person goes wrong and tries to help them fix what they have done. She talks Kirk down and manages to reverse the Manbat state. She tells Kirk he has one more chance form her . If he doesn’t fix things she will kill him.

Meanwhile, Kirk’s wife, Francine, gets a house call from the wrong type of doctor, Doctor Jonathan Crane – Scarecrow. It appears Crane thinks his fear gas is a little too old school and he wants to upgrade to the Langstrom sonic cannon to manipulate the mind.

Lisa and Kirk grow closer and are almost back to family form, when Kirk thinks he found the cure for the deafness he caused. He just needs a test subject, and this is where everything blows up in Kirk’s face -literally. Lisa becomes offended and blows up at Kirk for being nothing more than a test subject. At the same time, Kirk hears the danger mere seconds before the side of the house blows off. Scarecrow sure knows how to make an entrance.
Scarecrow does next is downright sick. He uses his tech to trap both Langstroms in a mental prison. He convinces them they are living in a false utopia where their marriage is perfect. Together Kirk and Francine work together, unknowingly giving Scarecrow the mind gun he wants.