Losing the Mask: 5 DC Tales of Coming Out 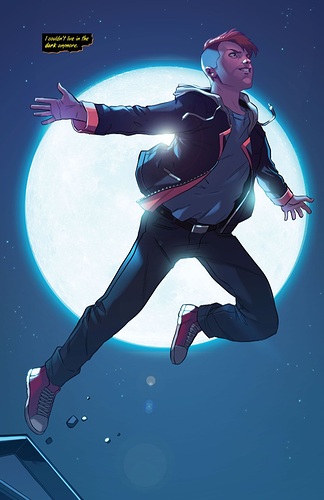 Pride month is in full swing here at DCComics.com and across the country. In our current climate, it’s never been more important to embrace your identity and celebrate the parts of you that form the person you are. But while pride is a lifelong journey, taking the first step can always feel like the most daunting. In a world full of prejudice, just being honest with the world about who you are can take courage worthy of a Green Lantern. It’s a challenge that millions of people around the world have to face…and one that even some of our greatest heroes have had to surmount as well. Here are five inspiring, illuminating and heartfelt stories about coming out in the DC Universe.

From the very beginning of the genre, the superhero story has always been about dual identities. Living one life in public and another in private. People keeping parts of their own identity secret for social survival have empathized with the likes of Batman and Superman for decades, for this very reason. Steve Orlando, known well for the queer themes prevalent throughout his work, made this subtext overt in his 2017 origin story for the Ray. As a boy literally forced to live in the dark his entire life, it’s only when the Ray embraces the light responsible for his brilliant powers that he’s also able to accept another part of his identity: his reality as a young gay man. Scary as it may be, life can be so much simpler, so much more joyful, after taking that step into the sun. After all, as Ray himself confides with the reader upon his luminescent debut: “Crazy how much easier it is to find a guy when you’re visible.”

To read about other character’s coming out stories, head on over to DC Comics!

What’s your favorite coming out story within the DC Universe? Let us know in the comments!

Thanks! I wrote this one

More than that, Hartley takes to task the historical “gay coding” of villains throughout popular media, up to and including the Joker, which subtly instils mistrust of people with attributes associated with gay communities in children from a young age. Hartley knows that hatred is learned—whether it comes from another group or yourself—but it’s also something that can be unlearned.

I loved this piece about the Pied Piper flipping queer coding of villains on its head. I haven’t read this story, but it’s true that so often queer characters are coded as evil. I’ve heard about people thinking the Joker is gay because of this. Obviously this kind of coding has been historically harmful for queer people, but sometimes I think we’re now swinging too far on the other side where queer characters often have to be shining examples of normal life to be accepted. That’s why characters like Constantine and Midnighter are cool. Love a little nuance in my characters

Either way, I love seeing the Flash having to question his own judgements about how he thinks queer people present themselves.

Great article, thanks for putting all these examples together!