Looking Back on the Friendship of Blue Beetle & Booster Gold 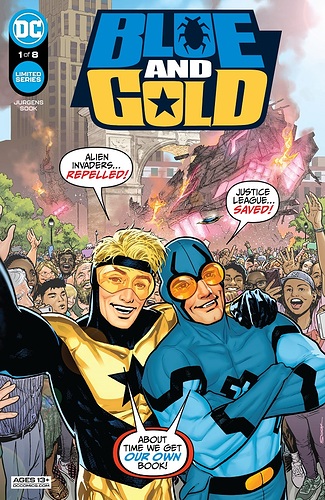 Whatever happened to the days when superheroes liked each other? When team-ups weren’t just about bruised egos and broken families? When did the Super Friends stop being, well… friends?

There was a time, decades ago, when the Justice League was just as much a relatable
workplace comedy as it was about banding together to save the world. When we’d take time to appreciate who these heroes were, and how they related to each other, before they all strapped on their spandex to defend the planet from an alien overlord. In those years, nobody captured that dynamic like the unlikely friendship of the Justice League’s two most notorious misfits, Blue Beetle and Booster Gold.

The Blue and Gold duo was a dynamic in which many of us saw ourselves—filled to the brim
with impostor syndrome, standing around people who always seemed to have their own issues way more sorted out and finding comfort and acceptance in each other’s dysfunction. “Hey, at least I’m not the ONLY loser around here!”

We all know someone, or wish we knew someone, who we could let our guard down with and just laugh out loud like idiots at the absurdity of life. And in the DC Universe, that’s exactly what Ted Kord and Michael Jon Carter represent. And while recent years have conspired to keep them apart, the Blue and Gold team finally have their own long-deserved buddy comic premiering this week with Blue & Gold #1, 34 years after they first met. As Booster might say, “It’s about darn time!”

Check out a quick primer on the long history of this dynamic duo over on DC Comics!

Are you excited for the debut of the new miniseries featuring Blue & Gold? Let us know in the comments below!

I wrote this one!

I wrote a Blue and Gold mini in the DCW ages ago. It’s about time the big boys caught up.

It is a great article @HubCityQuestion! I’ve got “Blue and Gold” waiting for me in my pull box. I love these guys. Years ago, my friend Mark and I used to run around the backyard playing them. He was Booster. I was Beetle!

I pre-ordered the whole series. I can’t wait to dig in to it!

Nicely written article… you provided a great overview of the Booster/Beetle relationship! I’m really looking forward to “Blue & Gold” (and have been since since the JLI days, when the series was initially rumored). I hope the series leads to even more stories featuring DC’s best Super Buddies.

I got the issue and I gotta say, I enjoyed it. For some reason, I thought Dan Jurgens was going to do the interiors. Ryan Sook is good, though, so it’s not a deal breaker, thankfully.

It took me ages to realize who “GG” was commenting, but when I figured it out, I was cracking up.

I love these guys and I’m so glad they finally have their own book (even if it is a miniseries)
I discovered Blue and Gold (along with the rest of the JLI) when I was in college. A friend loaned/gave me his copy of a New Beginning and I quickly dove in headfirst into the pool of zany misadventures.
Often, I have stated that the JLI reminded me of my own friends in the dorm.
We all lived in a brownstone building. We had our own mix of zany schemers, Bodacious Bombshells, Shy Wallflowers and harried straight-men (usually the RAs)
Long live the Blue and Gold!