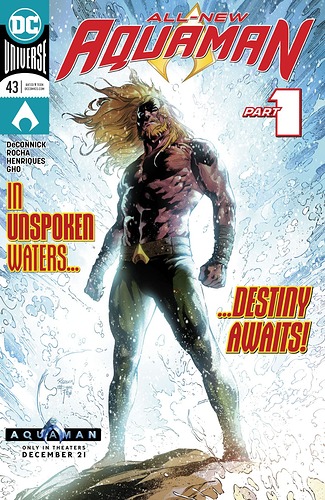 Days prior to Aquaman’s 2018 theatrical release, the comic adventures of the King of Atlantis were taken over by writer Kelly Sue DeConnick in Aquaman #43, with DeConnick’s entire run encompassing issues 43-61, 64, 65 and Annual #2.

Have you read this take on the Atlantean Adventurer, and if so what’d you think? Did the movie have any effect on you getting into this run (or series in general), or were you already a seasoned Aquaman fan prior to the movie and DeConnick’s run when it began?

If the run is entirely new to you because of this thread, then feel free to take a stab at where it all began: 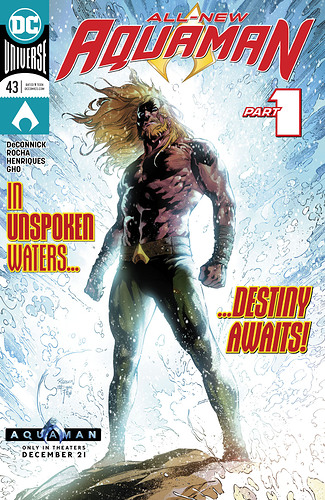 Tread the discussion waters with your thoughts on Ms. DeConnick’s tenure on the King of Atlantis down below!

I really didn’t like this run at first. Just that cover alone still makes me mad w/ the Marvel-esque “All-New” moniker and giant 1 that’s clearly meant to make people think this is a #1 issue w/out actually resetting the book. I also wasn’t a fan of the actual premise since Arthur was just another one of the big DC heroes to go through an extended period of amnesia, w/ Bruce and Dick being other notable examples who had, at the time, recently gone through the same sort of thing

But I can definitely say I appreciated it more once Arthur got his memory back. It was just a lot more enjoyable seeing Arthur back in his element compared to being stuck in a prolonged cliche. Of course maybe I liked it more so because I had built up lower expectations by the time that happened, but regardless, it’s still a notable jump in quality and that’s always appreciated

And of course there’s Robson Rocha’s brilliant art. Even when I wasn’t getting into the story initially, Rocha’s pencils were still awesome and made those books enjoyable to look at if nothing else. Of course it’s also sad to look back on the art ever since his passing, but as w/ any great artist, there’s also a certain level of comfort you can take in knowing that their work will be immortalized in books like this for people to appreciate for years to come

What people don’t talk about enough when they bring up this run is that a major part of it is a giant acquatic Black Manta mechsuit with the digitized brain of Manta’s dead father in it, and how it bonds with the grandson he never got to see when he was alive. Best part IMO.