Legion of Super-Heroes Club: Weekly Reader for May 22nd, 2019

Thanks for the comments so far folks =)

Legends of the Legion #4: Casualty

The story of Star Boy (Post Zero Hour but prior to after Final Crisis) was another fun romp in this slightly-younger aged version of the classic Legion team. The story has a lot of laughs, certainly no big drama, and even tries to connect this story with a couple of the prior issues of this run.

Rating: 6.5 out of 10 There are actually more than a few iterations and versions of the Legion of Super-heroes; this particular effort to make them simpler, less complex, younger with spiffy short names etc just isn’t my cup of tea. I can still enjoy this and also our monthly Watch a Long of the animated series, as they both go back to the boiled down mythology of the Legion. My fav versions of the Legion come with heaping spoonfuls of drama, suspense and personal growth and change for the main characters. We’ll return though to this version in the coming months to see how the regular series played out. I’m thinking this version of the Legion started with Mark Waid’s run in 1993 “Legionnaires” and kept on ticking through “Legion Lost (2000)” , “The Legion (2001)” and “Legion Worlds”, well over 100 issues I’m thinking. I suspect this lighter version of the Legion sprang as a reaction to the super downbeat “5 Years Later” run by Keith Giffen in Legion of Super-Heroes (1989-). 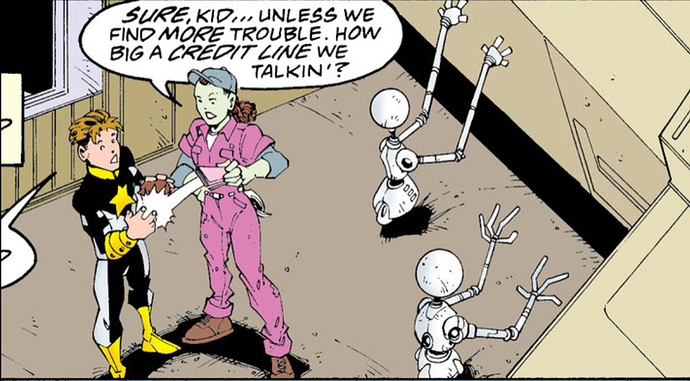 I loved Ultra Boy’s reaction to that part of the story. “A big obvious mark like you, she had to rob you blind – it would have been illegal if she didn’t!”

Yeah, I am curious to see what the tone of the other post Zero Hour / pre G Johns Legion is like.

I sense a new transmission from the Legion Club arriving soon!!!