Legion of Super-Heroes Club: Weekly Reader for May 22nd, 2019

Before we get started, I’d like to give a special thanks to Legion Meister Don-El for turning over the reigns of his club to me this week. I raise my ring in your honor

Okay, flight rings out and up Legionnaires! It’s once again time for more fun with the galaxy’s best and brightest, the Legion of Super-Heroes!

This week we’ll be reading Legends of the Legion. This is a four issue mini-series by Barry Kitson (plotter), Tom Peyer (scripter) and on pencils for issues one and four Young Justice’s Todd Nauck!

This is mini is completely accessible to any reader, be they a dedicated fan of the Legion or the newest member of it’s ranks.

Things to ponder as you progress in your reading:

Add your voice to the simmering Discussion Soup and let us see what delicious broth shall come forth! 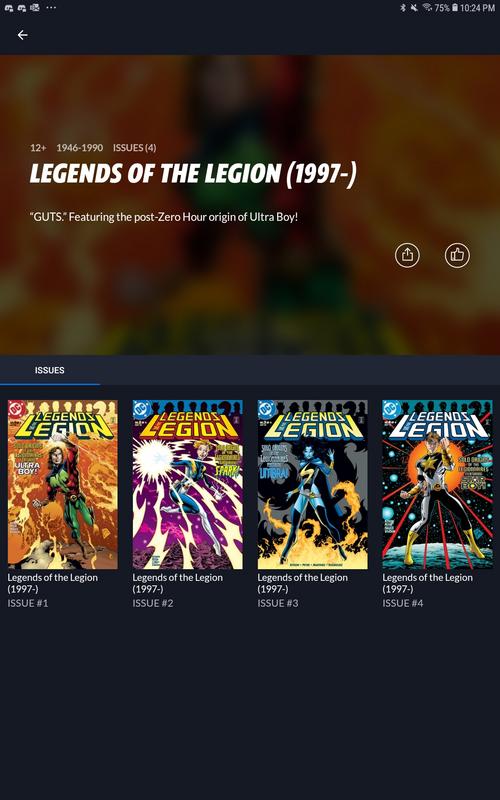 They are, aren’t they? Like lil’ literary stars of joy they is.

What does everybody else think? Who’s excited for this week’s Legion Read???

Cool, I am good my to be on time for this week’s read. I am looking forward to it. LLL!

Cool, I am good my to be on time for this week’s read. I am looking forward to it. LLL!

This is a very different version of the Legion then we’ve read before in the club. The closest has been the comic book adaptation of the animated series we watch once a month.

So this is going to be a fun version of the Legion. Looking forward to the next three issues.

I will quickly note, Vroom, that I do find it very fascinating the dialogue style of this comuc greatly resembles your writing style with your adventures that you published here in the past. Coincidence??? Ooooo Eeee Ooooooooo!!! 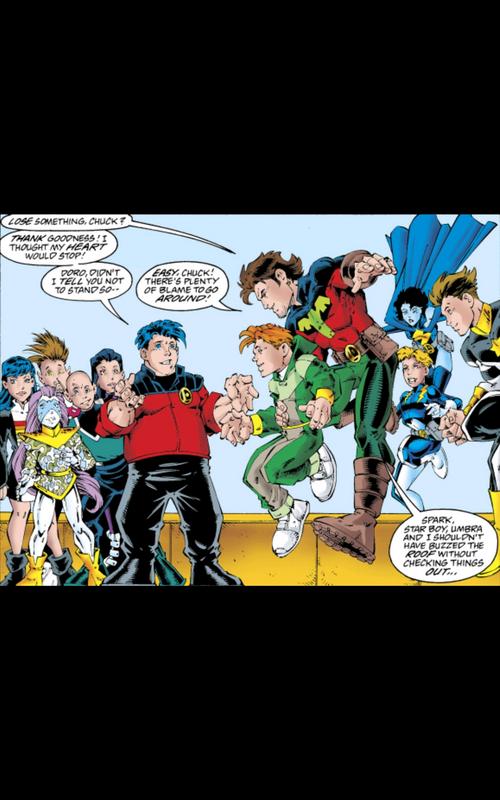 I would pay an extra $0.50 a month for a built in editor and delete button on this thing

@Don-El Sheer coinkydink regarding the writing styles, but thank you for noticing

Kind of a crazy night tonight between our Discord live chat and course watching the final episode of Doom Patrol… so I’ll read the second issue of this Saturday and post my thoughts then;

Just finished the Ultra Boy issue, and…Jo met the intergalactic Gilligan’s Island, right? I wasn’t the only one who thought that? A couple of them even dressed like Gilligan and the Skipper.

Okay, finished them up, here are my answers:

“1. Is this your first time reading Legends of the Legion?”

Yep – in fact, outside of a little bit of the early Abbet and Lanning Legion, this is the first time really really the Reboot Legion.

“2. Who is your favorite Legionnaire featured in this mini and why?”

The character I LIKED most out of the issues was probably Lightning Lass – er, I mean, Spark. I thought her struggle with being alone in a world full of twins was an interesting concept, and she’s just overall a great, bright, optimistic and strong hero that seems perfect for the Legion. The issue also vaguely mentions that she was put in to replace her brother, seemingly for political reasons, and I’m curious to know what the story is with that.

The character I found most INTERESTING was Shadow Lass – grife, I mean, Umbra, because in a lot of ways she’s the exact opposite of that ideal. She’s arrogant, close-minded, finds all aliens to be potential threats instead of potential allies. I’d be really curious to see how/if she grows beyond that and grows as a character.

“3. This mini-series is rather short at only four issues. Do you feel that was just the right length or would you have preferred a few more issues in order to get the skinny on more Legionnaires?”

I mean…yeah, I definitely wouldn’t have said no to more. But since I don’t have a lot of experience with this era, I don’t know how many of these characters would need this kind of treatment, I can’t really say who else could have been there. Plus I can understand the costs of making these kinds of comics and that it’s likely that they believed the market/buying audience wouldn’t have bought more than four of these stories.

Legends of the Legion #2 Resistance The Secret Origin of Spark!

I admit I think of Spark as “Lightning Lass”, and in fact in later iterations of Legion her name goes back to that. But, here the hook of making the Legion seem a few years younger than they are in the other runs of the comic goes along with short and sweet code names like Spark.

I agree with Jay_Kay, this one reads a lot better than the first issue of the run. The whole notion of a society norm, in this case having a twin bestie, being a standard that is shocking when someone doesn’t have in their life reminds me of the horror folks have if you say things like “I only use a dumb flip phone” or “I don’t have followers” (I have a fun Samsung Galaxy J7 V which some reading this will immediately go 'primate" at the thought, and have zero followers since I only use DCU Community and Discord for personal fun after work social media).

So the story makes sense on at least a couple of levels, one noted above and the other being the reluctance of Spark to be a hero at first. Most of us are not volunteer fire people or riding in ambulances to assist or in the national guard. She’s a high school student who suddenly is forced to step up and use her powers, and everything falls into place from there.

It wouldn’t be a Legion story series without Lightning Lad or Lightning Lass…I mean Sparks, showing up!!! 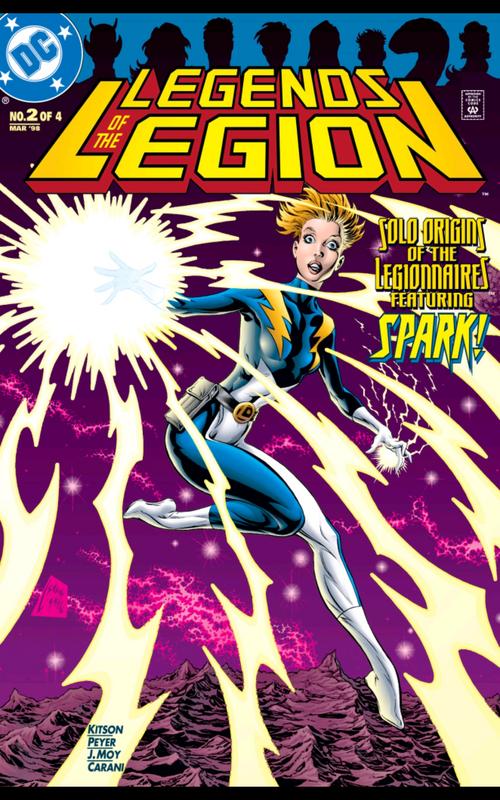 Plus, this mini served as a good gateway into the Legion in general. I wouldn’t be surprised if that was a factor in its creation.

Legends of the Legion #3: Eclipsed: The Secret Origin of Umbra

This issue nicely shows the origins of Shadow Lass (Umbra in this short-lived reimagining of the Legion) through her very self-centered egotistical mind’s eyes. The narrative stayed true to ignoring the blantantly obvious desires of her home planet in favor of her own love of the planet’s traditions, which of course all leaned heavily into her own inflated sense of identity as the planet’s defender.

Her sad attempts to bolster her assigned role and function in their society in the end backfired. The tragedy is that even as she tells the visitors about her story, she still hopes to someday sway her planet back to the old ways before they joined the United Planets.

Fun read, and makes me want to dive deeper into how long DC did this “reimagining” of the Legion and why they only a few years later backtracked and made the Legion older again with the traditional 1960s identities and backstories. 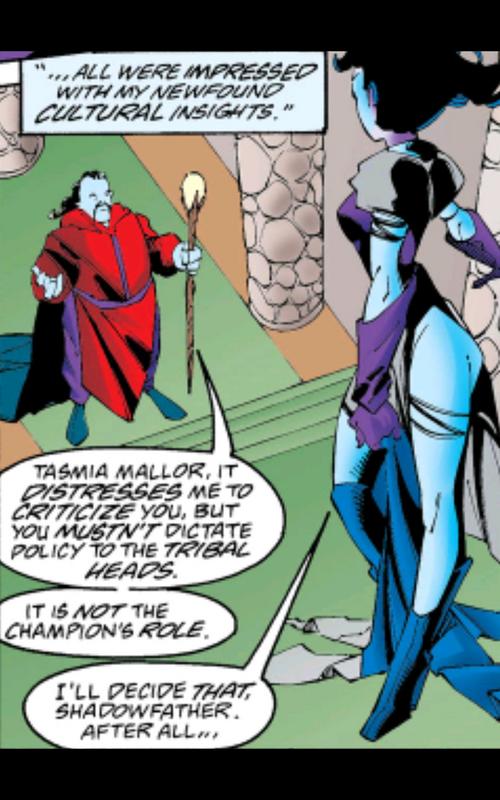