Welcome to a very, very special week for the [Legion Fan Club]; this week we celebrate our anniversary, one full year, 52 weeks, of weekly readings along with monthly watchalongs!

First, Voting: Which era of Legion is your personal favorite?

We start the week-long event with a mind-boggling reader’s trip through 52 years of Legion stories and versions, highlighting 5 comics from 5 different Legion eras, many of which we haven’t read and reflected on here yet together. We’ll have a Wednesday night Watch a Long the first Wednesday of May, during which we’ll enjoy the final two episodes of the animated Legion of Super-Heroes!

So jump in your Time Bubble and get ready to hop around from 1958 to 2020 as we observe Legion Through the Ages!!! 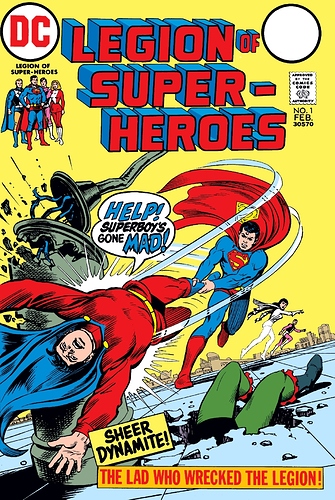 LEGION OF SUPER-HEROES (1973-1973) #1 60’s Legion Command Kid joins the Legion, but his arrogance puts off some of the Legionnaires. Star Boy, however, asks Command Kid to help him become as powerful as he is. Reprints from Adventure Comics #328 (1965) original not digitized yet.

DC COMICS PRESENTS (1978-1986) #43 Legion Just Prior to Giffen 80s When Superman faces a threat from the Sun-Eater and Mongul and the danger of Earth’s destruction, Jimmy Olsen summons the Legion of Super Heroes to help in “In Final Battle.”

SECRET ORIGINS (1986-) #37 Substitute Legion! “THE SECRET ORIGIN OF THE LEGION OF SUBSTITUTE HEROES!”

L.E.G.I.O.N. (1989-) #1 L.E.G.I.O.N. Vril Dox, ancestor of the Legion of Super-Heroes’ Brainiac 5, conceives a plan for a new intergalactic police force to fill the void left by the death of the Green Lantern Corps. Forged in the fires of the INVASION, a rag-tag team of paranormal aliens will grow into a tough, no-nonsense law enforcement organization with a cosmic scope.

JUSTICE LEAGUE UNITED ANNUAL (2014-) #1 JLU Annual 1 The Legion of Super-Heroes arrives with the shocking news that the 31st century has been destroyed! Now it’s up to the Justice League United to save the future!

THE LEGION OF SUPER-HEROES IN THE 31ST CENTURY (2007-) #17 Legion Animated THANAGARIANS AT THE GATE!” Forewarned by Dream Girl, Brainiac 5 knows that in order to keep the Legionnaires’ flight rings out of the hands of Thanagarian space pirates, they will have to first give them over to them.

Tell us more about which of these slices of Legion Legacy pie was the most delicious for you this time around, and which gets Second Prize too!

I’m excited for the jumping around throughout Legion eras.

I remember picking up R.E.B.E.L.S. '94 right after zero hour in the mid 90’s. The cover looked really cool (at least to a young me) and drew me in, but I was so confused on seeing a Vril Dox and a Lyrl Dox and not knowing anything about them other than there was some relationship to Brainiac.

This led me on some meandering comic book pick ups like single issues of Legion and Superman trying to figure out how Vril Dox was related to Brainiac of the present era and Brainiac of the future Legion era.

I’m pretty sure I just gave up on following that thread and dropped R.E.B.E.L.S. a few issues later (and boy is typing a period after every letter annoying). Even today a good understanding of the different Dox’s and Brainiacs lineages eludes me. But it doesn’t hinder my enjoyment.

Did you borrow that cover from cover thread?

Nope. When did it appear?

The 60’s legion book was great, I really enjoyed it and look forward to reading the others leter this week!

We’re only using comics we haven’t read yet. I’m pretty sure we have featured / read all the ones you’re talking about that are digitized.

Wow! The voting shows the love for a particular Legion is all over the map! But, not too surprisingly, the all-time historical favorite version of Legion is the early 80s Levitz / Giffin Legion so far in the voting.

Just finished the 60’s one myself. I love the asthetic of the future in that Era. Rocketmobiles are just great.

I also just love the story. The “oh he was just possessed by a demon that’s afraid of gold.” Makes total sense.

By the way, I do love that Nick Cardy cover.

I didn’t realize the Mongul was that old of a character. I love how his strength level is at or above Superman. In recent appearances of him (or is it his son) doesn’t seem like an a list threat.

The Jmmy Olsen ‘honorary Legion member’ does seem like such an absurd thing, but totally era appropriate.

The only other thing that stood out to me was cavalier attitude towards Wildfire getting blown up. It was like an ‘eh… This happens every Tuesday. No big deal.’

It’s fun watching the Legion here just before the Levitz / Giffin concepts. Wildfire being used like Kenny on South Park.

I read the rest and here are my thoughts.

The Secret Origins issue on the Substitute Legion was ok. I loved the art of it. Just stuck out to me. But the story itself… eh. I kind of started to skim it half-way through. I do like how super-powers are apparently so common in the future that characters with awesome powers (Chlorophyll kid, Polar Boy, Night Girl) are just thought of as mundane. I am a sucker for teams that do everything right but don’t ever get any credit though, so the ending of the story was great.

L.E.G.I.O.N. was good enough that I read the first few issues. Like I said earlier, the Dox lineage is confusing and weird but draws me in. The characters don’t necessarily gel as a team though. At least the few issues I read.

The JLU Annual was great. It definitely has drawn me in and I want to continue that story when I’m done with my current reads. It is one of the better time travel story tropes - the future being written vs we can change it.

And the Legion Animated comic did something so few future comics do. Typically I find comics that take place in the future ignore a lot of the alien races that exist in comics that take place in the current time. So it was great to see Thanagarians in it. I sometimes think there should be a little more of the story to go into why Earth culture and technology always advances so far in a certain time period and other alien races just stand still. That’s just me though. I love this animated take on the Legion and this comic is a good extension of the series.

Maybe it’s because the Substitute League show up so seldom that I always find something in their stories to enjoy usually. And they pop up in the oddest places in storylines too in many cases.

L.E.G.I.O.N. had at least two other revivals after the one we sampled this time; one in 1994, the other just before Flashpoint happened (called R.E.B.E.L.S.). I think DC has a very rich galactic heritage of planets and characters, some of it we see in Legion and then a series like early 90s 'L.E.G.I.O.N." claims the alien cultures of the 31st century for current day comic book story settings. To your point, why don’t other alien cultures advance between now and the 31st century (or why aren’t they more primitive in L.E.G.I.O.N), why is it just Earth that seems to in the DC universe?

I’m also looking forward to reading more of the JLU crossover (as well as the JLA / Legion crossover of 2006 or so) in the coming months during our freshly-revamped pacing coming up! I almost included the JLU Future’s End issue that has “Legion” but it turned out to only be Dawnstar in a very background role, so I skipped it as “canon” for us to read.
https://www.dcuniverse.com/comics/book/justice-league-united-futures-end-2014-1/a681b4c3-a7aa-4fb2-8379-e9b52c624759//reader

Thanks for joining us this time around.

We’ll be back Wednesday the 6th for our monthly watch along, and then the following Wednesday, May 13th with another entertaining Legion of Superheroes reading as we enter our second year!

Thank you for this. I like reading your week-end summary. It’s always full of little Legion knowledge is otherwise miss.

I began reading L.e.g.i.o.n from issue (if memory serves right) 4 or 5 - mainly because i loved Lobo at the time, and wanted to check out the new storyline in which he appeared. I was hooked from first page and really really miss that team. Ive since then been a fan (also of the late rebels) and i constantly hope for them to make a comeback. The characters were great and and the storytelling was in my humble opinion excellent.
Im from Denmark, and worked in a comic book store back when i picked up my first issue, and the owner of the shop helped me get the first 3-4 issues i missed from a trip he took to USA - visiting his relatives.

Nice to meet another Legion / L.E.G.I.O.N. / R.E.B.E.L.S. fan! It took me a couple seconds to catch what you did with your “long live the legion” shout, lol. 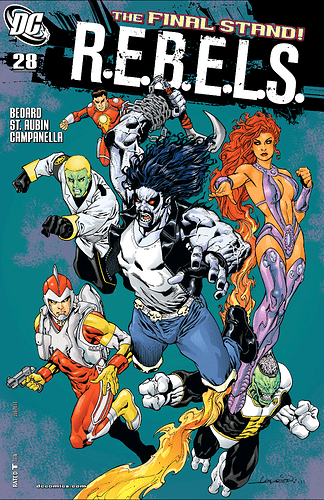 the heavy use of DC cosmic heroes, with always a nod to the future Legion come.