Welcome back as the [Legion Fan Club] dares to approach one full year of Legion goodness here on DCU!

This week we tune our time monitors back to the year 1980, when Gerry Conway (of “Death of Gwen Stacy” infamy) along with Joe Staton (renowned Green Lantern artist) were continuing to steer the Legion ship in the years immediately prior to the Levitz / Giffen explosion! Since they were tossing poor ol’ Superboy out with a case of future time amnesia back to his past, they naturally changed the series name to simply “The Legion of Super-Heroes” …and the world of comics has never been the same since!!! 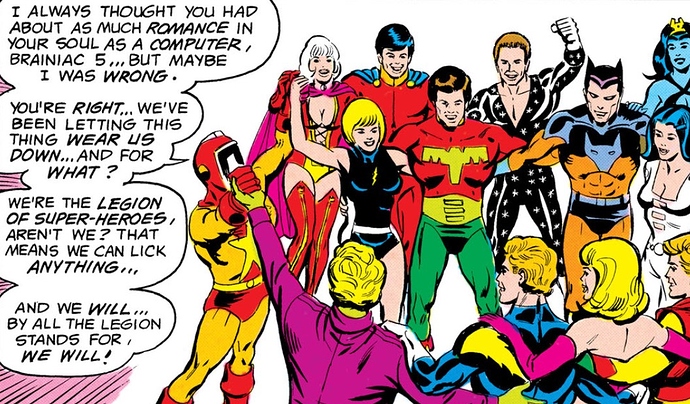 The Legion battles the Psycho Warrior as Superboy goes into his past and stays there (thanks to Saturn Girl).

A traveling circus plagued by deaths gets help from the Legion of Super-Heroes.

The Legion of Super-Heroes discovers the identity of the space circus killer.

The Legion encounters space pirates as they help R.J. Brande get his fortune back.

The parents of certain Legionnaires are kidnapped by Dagon the Avenger.

The Legion rescues their parents from Dagon the Avenger; Lass and Dawnstar try to go to Tyroc’s home to request his assistance. 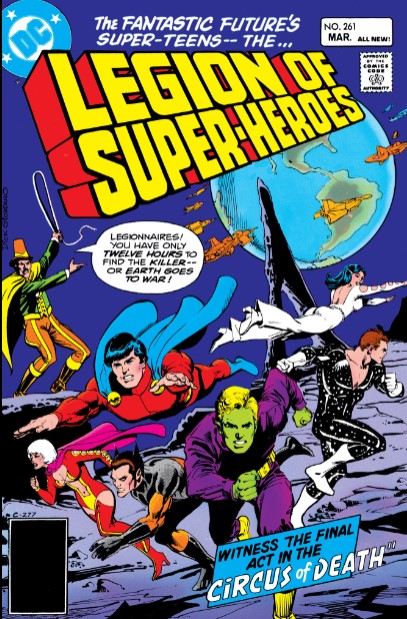 Questions to Ponder and Explicate Upon:

Next week: we go check out what the Legion looks like right after Zero Hour!!!

After a long weekend I got to the first storyline today.

And I hope everyone had some nice weather over the weekend as well. It was warm here, but wet.

I found the Psycho Warrior storyline alright. One thing that stood out to me was how much time and space was spent on his origin story. For a book that was only 18 pages long (and that includes the cover) almost 5 whole pages were spent on his origin story, an origin story that had no ties to any other Legion or cast member. That’s pretty substantial. I don’t know if Pscho Warrior appears any other times, but for a first time villain, that some pretty heavy investment.

I could see people sticking it out on Bunyan’s World. Although I would see it more as a group of people wanting to be cut off from the rest of society. I wonder if the inspiration for leaving the planet to go to Earth for education came from the Amish tradition of Rumspringa - or leaving the community to see the outside world.

I do think the Legion is better off without Superboy. I think he overshadows many of the Legion members just in terms of personality and abilities. So many stories seem to end with Superboy being the one to force a confrontation or stop the bad guy. Without Superboy I think the spotlight shifts.

I’ll be back later today after I get to the other stories!

Ah, yes— the glorious bygone days when Gerry Conway decided to give many Legionnaires personalities they never had before— grand, well made comics that are little too super-hero, and sometimes not quite enough Legion, and a future drawn by Joe Staton that doesn’t always look futuristic-- zoos are simple circus cages.

The comics ain’t bad, but somehow, the feel can be off.

I’m just wondering if the inspiration for something as wildly harsh as Bunyan’s World is possibly related to the writer of Pilgrims Progress John Bunyan, a renowned Puritan preacher …I’m just not sure…

It’s definitely an interesting time will Legion history. It feels like a preamble.

Back after finishing the other issues. It has to be hard to juggle so many different characters, because other than Tyroc and Wildfire, I think all of the other characters faded into the background. The circus arc did not hold my attention well, but I do think that anyone with superpowers can fit right in with a carnival. I’m pretty Blob from X-Men did that, and a whole team of mutants in Age of Apocalypse did that as well.

And not to be critical, but with the kidnapping of the Legion parents, that villain sounded almost identical to the PsychoWarrior. “I know all your weaknesses,” “You can’t defeat me,” etc etc. When both villains talk this way, its hard to keep them separate.

Not sure if it was this week, which feels busy coming off Easter, these issues, or something else, but I was skimming some of the middle issues here. Looking forward to next week though!

When I saw we were doing the circus, the first thought I had was of the Marvel villain the Ringmaster who was prominent in the mid-1960s, where the writer would indeed show characters like the Hulk etc forced to be in a circus because of a hypnotic hat.

My main desire for running this club, literally tasking ourselves with looking over every grouping of comics that was ever published for Legion, is to get a good knowledge and understanding of what happened historically through the different eras and also to read some great stories. There are unfortunately gaps that sometimes last a year or longer that aren’t the best of Legion which again is why we do this back and forth in history thing monthly so that we don’t try to read one mediocre era over a four week period.

There’s another grouping of the stories that we don’t even have access to here on DCU digitally that again kind of preps the way for what happens in the early 70s with costumes and relationships and style of the series. I mean missing Dave Cockrum artwork is just crazy but we are, along with his styling of uniforms.

Storyline 1: Supes leaves, the PsychoWarrior storyline wraps up: What was the scariest thing about PsychoWarrior’s origin story for you: the fact any group of people would actually stick it out on a planet like Bunyan’s World, or the wild obsession he had concerning the Legion?

Definitely the Legion. I mean, history is filled with people risking it all to tame a wild land to live on, but from what I remember, the Psycho Warrior’s obsession with the Legion had rather flimsy reasoning at best.

Also, is Legion better off or worse off with no Superboy? Why?

That’s a tough question. In terms of them in their fictional universe, having someone so strong and versatile was a key asset in their power. On the other hand, if something were to happen to Superboy, that’s their whole universe in jeopardy.

Then there’s the meta levels! That asset makes sense for them to have, but kind of lessens the drama because you know Superboy is going to make and save the day at the very least.

Finally, on one hand, the Legion wouldn’t even exist without Superboy, and on the other, Superboy is a huge reason why the Legion’s continuity is so bonked.

I guess overall, I think it makes sense for him to be there and involved, but should probably be utilized sparingly.

Storyline 2: The space traveling circus: How did the concept of the Legion being able to easily pose as carnival characters work for you, did it make good fictional sense that their powers can seem “freakish” and “supernatural” etc?

The circus thing did feel like Conway was just playing superhero mad libs. I mean, the circus is kind of a dying thing even today, let alone what it would probably be almost a thousand years from now with aliens filled with special powers.

It was kind of fun seeing stuff like Brainy act like a magician and Phantom Girl using her power for his tricks, so I guess I can just go, “Shut up, Brain, just go with it.”

Storyline 3: (issue 262 “The Planet That Captured the Legion”): One thing Legion can do that other comic book series struggle with is deliver a good old fashioned Sci Fi short story- was this one solid enough, or were there “gaps” in believability in places for you?

I mean, on the outset – the Legion being commandeered by flying old fashioned pirate ships, that’s pretty fantastical. But when they explain it, if you’re willing to accept the other fantastical elements of these stories, it works well enough.

Storyline 4: The kidnapping of Legion parents. This theme of disgruntled former employees or creators who have their work rejected with both resulting in financial pain and then plans of vengeance follow appear pretty regularly, like in the Iron Man 2 movie, etc. Which part of this two part story did you find had the best intriguing “hook” or mystery?

Honestly, the idea of the Legion having parents in the first place. It’s honestly something we rarely see, since there’s so many and they’re often focused on the adventures that you can sometimes forget that they are young people with families waiting for them.

Considering how young the Legion is in some of its eras, you’re right about how the focusing on the parents more really does make sense and I feel like B. Bendis did just that with his run recently.

I know Threeboot actively avoided parents (i.e., “Eat it, Grandpa”) but did Bendis have any other parents in the mix other than Jo’s and the twins’?

Oh man! Of course Cham! That’s so obvious. I don’t remember Imra, though - as I just mostly remember all those “collective” scenes.

Well we’re slowly rereading the 2019-2020 Legion run currently, so we’ll look for that for the whole parent connection as we finish that up.

Also, is Legion better off or worse off with no Superboy? Why?

WHAT??!! They still had Superboy! Just the one with the red suit and the blue cape, and in a pinch they had the one-power-at-a-time Superboy!

Legion Fans: Mom, can we get Superboy?

Mom: We have Superboy at home.

the one with the red suit and the blue cape, and in a pinch they had the one-power-at-a-time Superboy!

They got Supergirl cause it felt like home to her!

LOL You all crack me up