Our tale of two Legion series running simultaneously in 1984 continues, but now we are at the point where the stories diverge into two separate paths. We can read three of one series and three of the other without mashing it all up.

However, if like some do with their peas and mashed potatoes, you prefer a blended reading, SO BE IT! I will not say thee nay, for thou shalt still therewith consume thy weekly required Legion dietary reading!!! 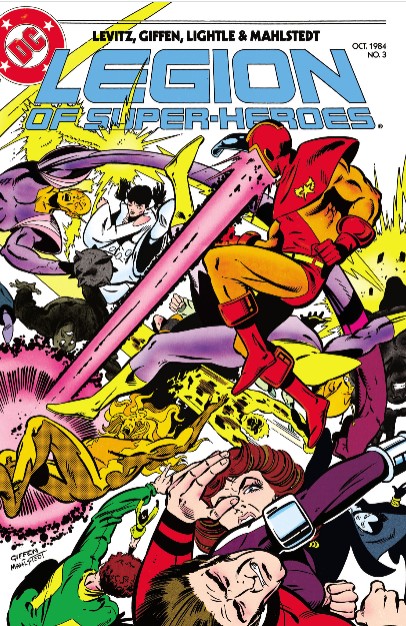 LEGION OF SUPER-HEROES (1984-) #3 LoSH 84 #3
The Legion of Super-Heroes must race to stop a team of mystics from reviving one of the team’s most deadliest enemies: the mad magician Mordru!

LEGION OF SUPER-HEROES (1984-) #4 LoSH 84 #4
As Light Lass regains her lightning powers, the Legion discovers the Super-Villains’ plot to steal Orando and place it in another universe.

TALES OF THE LEGION (1984-) #316 Tales #316
The Legion of Substitute Heroes and the Legion Academy cadets steal the show!

TALES OF THE LEGION (1984-) #318 Tales #318
Mon-El and Shadow Lass fight to save Shady’s home planet from the deadly clutches of the Fatal Five’s Persuader and a mind-controlling villainess!

Questions to ponder for fun:

Next week: We jump in the Time Bubble and leap to the time the DC Final Crisis was about to take shape and Jim Shooter was called in to handle the writing chores!

I feel like I’m behind in my readings this week. I’ve been trying to read the All Star Comics from the 1940’s for the Justice Society books. I feel like they are a slog, so I put them down to come back to the Legion. I was also a bit lost in searching for these comics, you type in Legion to the search bar and a million comics come back … Where were our links this week?

I’ve only made it through the first three books - although I must have been enjoying them because I read through #6 accidentally. I really enjoyed Lightning Lass’s arc this week. Feel full circle from reading the start of this series a few weeks ago. The conclusion - issue 5 felt like it was solid. How the LSV fell apart and the Legion stood together.

I did find myself contrasting Legion to the Justice Society books I read. It shows how far a ‘team’ concept has come in 80 years. Each of the Justice Society books is really a collection of solo adventures - or a ‘team emergency’ that consisted of everyone going on solo adventures. The Legion has never really been that, and maybe partially due to its large cast of characters, but even when separated into groups they are still team adventures.

Alright… I’ll be back after reading about the Substitute Heroes!

Oh sorry, l’ll fix the links. I embedded them in the initials when I copied and pasted them over but it didn’t come across, yikes!

No worries at all.

I’ve seen so many clubs use the closed list for links I kept looking for a line of text I may have missed.

I had to actually research what Tales of Legion was called before it changed titles because it didn’t show up when I searched for it. (duh - Legion of Super-Heroes)

Anyways… out of all the clubs I’m in, and it seems like a growing list, I’m enjoying the Legion the most so far. So in case no one tells you, much thanks for putting this club together. I look forward to it every week.

Issues featuring The Substitute Heroes seldom disappoint. For sure, some of their appearances are much more entertaining than others.

The Substitute Heroes have been fantastic on the Legion animation that we watch once a month first Wednesday of the month.

I just finished the other three issues.

The Substitute Heroes definitely were the highlight. Rock Boy was fantastic in that he literally turns to rock. It was interesting to see Polar Boy here, after reading issues where he is a Legion member. Interesting to see him trying to be a leader over other Substitute members. I guess it shows his drive to eventually become a Legionnaire.

I’m pretty sure I’ve caught the episode of the animated series with the Substitute Heroes (I say pretty sure, I’ve watched the series multiple times - I’ve definitely seen it more than once).

Poor Stone Boy, seeing him in battle here kinda reminds me of the role I played in some junior high gym classes I was in, lol… 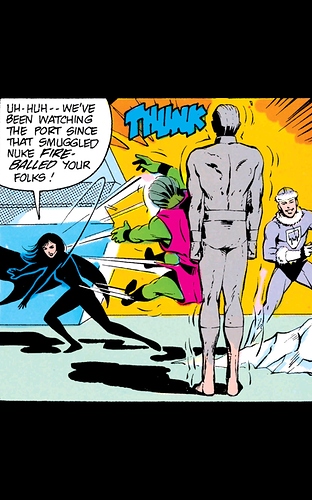 Fun to see the early hints of the upcoming 86 Crisis here too. 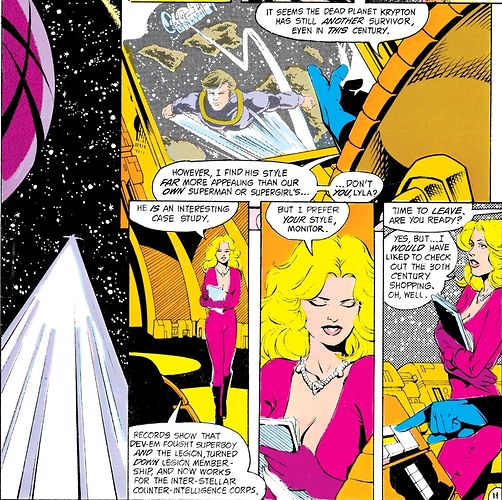 I have enjoyed seeing the monitor appearances. It is wired to see him here and how his appearances across books don’t necessarily hell with his agenda from Crisis.

Oh yeah too funny having Harbinger act like he’s some gorgeous guy she wants to hang around with, hilarious

Oof, that’s a hard one, I’m split between #4 and #5, between Karate Kid’s sacrifice and Princess Projectra taking her right as royalty and executing Nemesis Kid for his crimes. This was without a doubt in my mind the best three issues of the week.

Hmm…another hard one. I think I’ll go with #316, because it was cool to see Cosmic Boy and the Subs work together to save themselves from that trap.

What is it that’s so lovable and cherished about the Legion of Substitute Heroes? How about this time around, anything in particular you really enjoyed with having them show up this time around?

I think what I like most about the Subs is their hope and strive to improve. After being rejected, they could have just let their dreams die and wallow in self pity, but instead they chose to try to get better in the hopes that they will be in the Legion one day. They’re the perpetual underdogs, and who doesn’t like the underdogs?

Oh yeah too funny having Harbinger act like he’s some gorgeous guy she wants to hang around with, hilarious

Sort of makes me wonder just how much about Crisis did creators like Levitz know at the time. Like did any of them know what the relationship between Lyla/Harbinger and The Monitor would be?

Once again, I think we’re all seeing evidence that this early to mid 80s Levitz / Giffen run truly was the Golden Age of the Legion, of all the ages that we visit overall.

Between the multiple running storylines. the dialogue, the character development and the artwork, it is just amazing… it was like a perfect storm in the good sense.