[Legion Fan Club] presents: the Gerry Conway / Joe Station version of the Legion in 1979 plus the continuation of Jim Starlin’s Ultra Boy being framed for murder saga: SUPERBOY AND THE LEGION OF SUPER-HEROES (1977-) #248 - 252 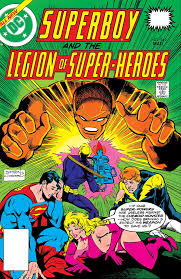 SUPERBOY AND THE LEGION OF SUPER-HEROES (1977-) #250 Chameleon Boy announces that Ultra Boy was framed for the murder of An Ryd, but before the full truth comes out the Legion must deal with the threat of Omega.
WRITTEN BY Jim Starlin, Paul Levitz PENCILS Jim Starlin
https://www.dcuniverse.com/comics/book/superboy-and-the-legion-of-super-heroes-1977-250/47020edc-e076-4b71-82e2-dbd1a40361c2

SUPERBOY AND THE LEGION OF SUPER-HEROES (1977-) #252 The Starburst Bandits try to make the sun go nova, but the Legion has something to say about it.
WRITTEN BY Gerry Conway, Bob Rozakis, Fred Hembeck PENCILS Joe Staton, Fred Hembeck
https://www.dcuniverse.com/comics/book/superboy-and-the-legion-of-super-heroes-1977-252/f3fa15a8-5622-4ae6-985d-dbf13cbc553d

I may have a Fred Hembeck surprise before the end of this reading week.

Next week: I wonder what those clones of the Legion are up to now???

I’m frankly a little frustrated that the one page Fred Hembeck cartoons aren’t in these issues as advertised …I mean why are they bothering to mention it if it isn’t digitized… so I’m searching through my Fred Hembeck fat volume, in case it’s included there somewhere. Lots of DC stuff but not sure what appeared in these comics. 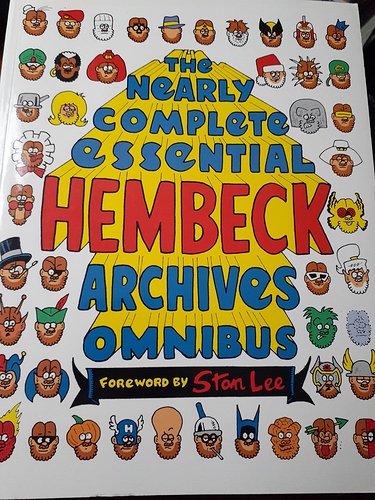 I kind of forgot he had drawn and signed something for me for a modest price in the book. 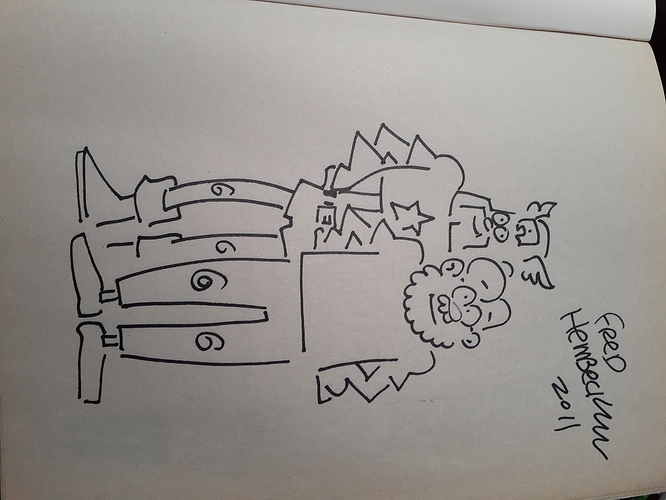 I was excited to see Jim Starlin had written some of these. Color me even more shocked when I liked Gerry Conway’s better than Starlin’s issues. I think they just read a little better, or maybe told a better story. I mean the sewage monster storyline was weird, but made just as much sense as Brainiac going crazy and creating undefeatable monster just to be recognized. I really thought it was weird on the issue that opened with Brainiac trying to cure matter-eater lad and everyone standing around as if nothing had happened at all. it made a little bit more sense when the guards came in and took Brainiac away, but I wouldn’t have been surprised if the Legion just decide to move on from it and accept Brainiac is crazy but they need a smart guy.

The artist changed in these books? Like I’ve said before, I don’t follow art much, but thought the art across these issues was fine.

I guess the ending to the ultra boy plot make sense. But only if you’re willing to accept that Brainiac not being chosen as leader and being over stressed is going to make him crazy and try and destroy the whole universe to get his just due. And if he was going to destroy the whole universe, anyways, why does he have to frame ultra boy. Because he’s crazy? Maybe there’s more to this plot line and I’m just missing it.

Out of the couple months that I’ve been following the legion club, I kind of feel like these are the weakest stories we’ve read yet. Maybe I’m alone in that, or maybe it’s that these aren’t too complex plots.

@Meisaj Thanks for participating again with us this week, helping us push the Legion Reading Wagon Train along in the Internetz Wildernesses… for some, due to the one to two issue storylines of this Legion run of 1979-1982, the quality of the stories will surely go up and down like a boat at stormy sea.

Like many other long-running popular comic book series, Legion of Super-Heroes has had it’s ups and downs year to year for the 55 years it ran til 2013. When we started this epic 6 year reading journey in the Comic Book Wilderness, we all had heard that many consider two eras the “must read” and “the best of the best” of Legion: the early 80s Levitz / Giffen run and the mid-1960s Jim Shooter run (when he was but a wee lad writing while attending Junior HIgh). Personally, I tend to find the stories that Paul Levitz and also Jim Shooter wrote between 2008 and what we just read from 2013 above the average Legion fare as well.

But the other eras of Legion stories by other writers and artists have contributed to the overall background histories of the characters and villains, regardless of how DC reality was rebooted or retrobooted that year.

I’ll continue to spare us reading two weeks in a row of any era, since what one participant thinks is the best thing they remember reading when they were younger may turn out to be all but unreadable to others that are viewing this for the first time as an adult.

Don’t take it as I didn’t enjoy the stories. I just think compared to some of the other stories we read they don’t come off as strong. I do like seeing the interactions with Mon El and Superboy from this era, who are essentially all powerful. Ultra-boy being up there too, and writers having to come up with ways to either sideline the or somehow create and explain a character more powerful than them.

It reminds me of a student I had who used to drawings of dragon every week. He would show me his drawing and say this was the most powerful dragon ever and when it talked the universe shook. No one can stop him, until the next week when he drew a new dragon that the was the ultimate strongest dragon.

I had an office full of dragon drawings in order of strength that perfectly matched the time of when they were drawn as well.

Ultra-Boy, Superboy and Mon El were suffering from the “Word Effect” long before Word ever existed.

I was looking it up to try to figure out why you guys were talking about Jim Starlin when it says “Steve Apollo” on the credits in the issue, then I looked it up:

Jim plotted and laid out “Murder Most Foul” which is actually the prelude to what was to be a 64 page epic for a planned S&LSH Spectacular (as part of DC Special Series ) to be completed by the same team. The story was plotted and laid out, but plans for the Spectacular fell through, leaving the mystery hanging until S&LSH #'s 250-251 (January-February 1979). By the time the story saw print, inker Rubinstein was tied up with other projects and the 64 page story had been whittled down to 42 pages. Starlin wasn’t a bit happy about the truncated story (not to mention that he’d laid out the comic playing to intended finisher Rubinstein’s strengths leaving actual inker Dave Hunt pretty much holding someone else’s bag since his style was so radically different from Rubinstein’s), so he requested his name be taken off the credits. Editorial told Jim they needed a name for the credits…and Steve Apollo was born. That was pretty much it for Jim Starlin and the Legion. Should’a been a match made in heaven.

Who wins the writing award in this set of 5 Legion comics: the renowned Gerry Conway, or Cosmic Jim Starlin? Why?

Definitely Conway – while Starlin’s story had a bigger scale and potentially more interesting, it kind of makes no freaking sense whatsoever, and I’m not even sure if it would have if they were able to do the Spectacular issue that was the original plan. While the Conway story is kind of a ho-hum premise (the Legion was literally fighting poop monsters), it at least felt more complete and didn’t rely on extremely out of character behavior for shock value.

Who wins the best art award in this set, Joe Staton or Jim Starlin? What do you like from both?

Honestly, they’re both about the same level to me, at least from these issues. Maybe with different inkers/colorists they might show differently, but both of them feel like strong, pulpy sci-fi artists that are a good fit for Legion.

Were you satisfied with the conclusion of the long-awaited ending of the Ultra Boy framing plot? Why or why not?

So Brainiac 5 killed An Ryd (btw, did anyone else feel like that was a shout-out to novelist/philsopher Ayn Rand?) and framed Ultra Boy…why? What purpose would that serve to him raising Omega to kill the universe because…he should have been paid more?

Honestly, it’s kind of garbage as is. It makes no sense, it comes out of nowhere, it feels like it’s solely there for a cheap twist.

Rate this set of 5 Legion comics overall 1-10, 10 being the best Legion ever!

I’ll give it a 6, and that’s really more to do with the art than the writing. It’s harsher than I would like, but…it’s really just not a satisfying story at all. Like @Don-El said, every long running book has it’s ups and downs, and I definitely feel like this was a down period for the book.

Thanks Jay Kay. I guess you could say I don’t want to miss a thing concerning Legion, as long as I take my medicine in small doses, lol.

When it comes to comics, are there people who aren’t completest?