It’s been so many years, 8 or 9 years since this came out, I’ve honestly forgotten what finally happens to Earth-Man. I just know I still find the whole concept very intriguing and very contemporary, the way that for political saavy or whatever he was mixed in with the rest of the legion including those that aren’t Earthlings in spite of being such an awful villain.

And I’m a little curious as well… isn’t Shadow Lass an alien? She’s not from Earth, right? So why would Earth-Man go near her??

Tuesday night already, time for us slow pokes to get around to reading these three comics and maybe the extras!

Guess I better get crackin.?

A great issue, really highlights all that is best about the Legion. There are three or four separate plot lines, 4 different planets with drama / action, fighting action, family ties (Lightning Lad, his wife Saturn Girl and sister Lightning Lass team up to rescue the twins I believe they are?), and mystery abounds!

A delight to read, highly recommended! You’ll enjoy the issue more though if you read at least the issue before or of course issues 1-3 first.

I guess the only thing I’m not a huge fan of are some of the uniforms for the ladies, it kind of goes back to that wild late '70s style where it looked more like an early '60s teen age beach party movie than a super hero comic. If I’m going out to battle, things are going to be flying around like I’m in a construction zone, it just doesn’t make a lot of sense to show up in something as skimpy as Shadow Lass or even Lightning Lass, in my highly practical opinion.

A decent issue, it was good to see so many of the Legion favorites from the many decades prior showing up for the big fight on Earth: Ultra Boy, Shrinking Violet (the writer claiming she can go to microscopic level), etc.There were some nice plot developments like finding out the female time scientist that caused Titan’s evacuation apparently isn’t aging generation to generation!

It’ll be interesting to see how Earth-Man continues to feel he is “pro Earthling” yet has turned against the pro Earth movement.

I also can’t figure out why he has hooked up with Shadow Lass who definitely is NOT an Earther!

I’m not sure why Brainiac is obsessing so much on those coakroaches, but I assume it’ll make for a story for a future issue.

Brainiac is also very very lucky he got off as easy as he did once Earth-Man, now fully pardoned, took the ring off, fully realizing that the ring was affecting his moods (I assume an in joke referring to the once popular “mood rings” that would change color based on your finger’s temperature or some such).

I’m intrigued to see where this takes Earth-Man next. The synthesis of the whole experience for him seems to be “I now understand we have to get along with aliens, but it doesn’t mean I have to like them!”

It was interesting to see Chameleon Girl show up as Colossal Boy’s date, even as others of her species are off killing off Earth government officials and blending in (shades of Secret Invasion!).

I easily give this set of 3 comics a solid 8.5; it features some of the best reasons to read Legion, it has lots of hooks to hold my interest to read the next issue, and many of my very favorite Legionnaires are here!

I’m eager to have the club come back to this series next month, but tomorrow we use the Time Bubble to go back several decades to pick up again on a series we read earlier on, a real classic!

Then, Wednesday July 3rd, get ready for a very special run, part of which by the DCU rule book SHOULDN’T EVEN BE ON DCU!!! We have ourWatch a Long the 3rd of July as well!

I THINK I remember what happens to Earth Man at the end of this series, but since I’m pretty sure we’re going to keep going with this series anyway, I won’t say anything.

As for why Earth Man would want to make the beast with the two backs with Shadow Lass…well, the obvious answer that comes to my mind is, well, Shadow Lass is super hot. You can be a xenophobic bigot and still find someone from that ethnicity (or in this case, species) attractive.

Another reason that comes to mind could be that his bigotry came from a lack of accomplishment – Earth Man tried to join the Legion, and when he was rejected, instead of deciding to work harder at controlling his power, he blames the Legion, that they must not like something about him, and since a majority of the members of the Legion aren’t human…they must hate humans. And that’s what caused the whole chain of events which brings us to now.

Now, Kirt has gotten what he wanted when he was a kid – he’s now part of the Legion of Super-Heroes. It’s possible now that he’s worked with them, and he’s at least somewhat accepted by them, he feels less of a reason to hate them because they’re aliens. Exposure is, after all, the best disinfectant of assumptions and bigotry.

I still feel like the hooking up thing was still a case of Levitz hitting characters with the Stupid Stick to make some drama, though.

Neat! Looking forward to the next story, though now I’m really curious about this thing on the Third. Why must you tease us so?!

Oh, and heh, to illustrate my first thought with the Kirt/Tas thing, I was going to post a pin-up I found, but I kinda forgot. I’m just gonna post it anyway, because it’s just a gorgeous work of art – the deep colors in the background alone are amazing, as someone who draws a bit as a hobby, it gives me a major case of the envies. 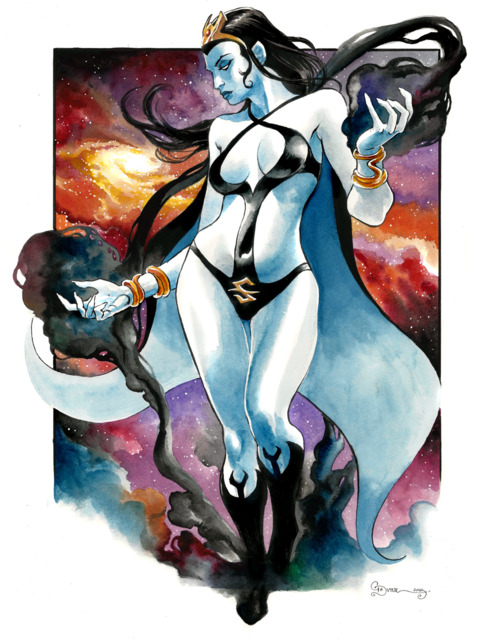 Thx for sharing! I haven’t seen her use her powers much.

Also, hate to do this yet again, I know this will eventually haunt me but…when Shadow Lass speaks in this particulat Levitz modern take on the Legion, the way she carries herself and interacts during battle with the rest of the team reminds me of…

Just don’t ask me why…

So I went and did the extra credit, and man does it still hold up. I really feel that if there’s one story that I think best introduces the Legion in a modern context, it’s this one.

From #858, it shows what the Legion does for Superman and his upbringing – as someone who almost by necessity has to be an outcast, being able to go to a place where he can embrace whip he is with others just Like him helps shape him into the Superman we know and love.

In a way, it’s an interesting paradox – by bringing young Clark into his future, they cement and make their present possible. 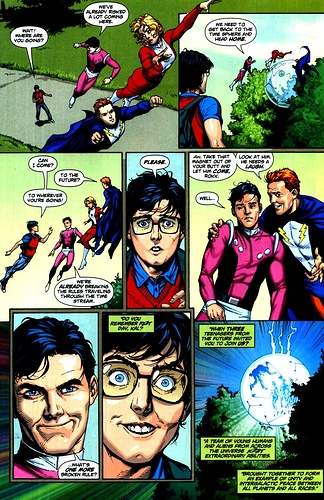 And 859 shows the themes of xenophobia and how it can corrupt and twist the world around us – something that I think had sadly only become more modern and important. Not only that, but a focus on that melting pot of different cultures coming together for a common cause I think makes the Legion stand out from other superhero teams out there. 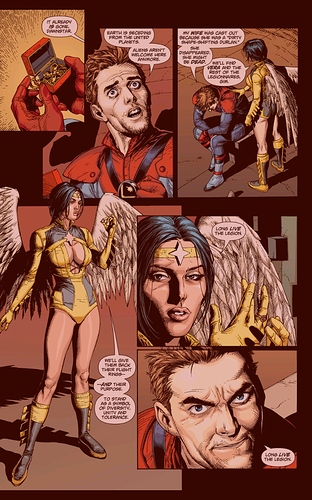 I had to look at that little box with jewelry in it for a few seconds to figure out what that was supposed to be… The horror! it’s a bunch of discarded Legion rings!!!

Thanks for wrappingnthis up, J-K , now to get ready time to unveil the new reading around noon Eastern today!!

Long live the Legion! Maybe when this is finally wrapped up in 6 years, I’ll be able to recite every Legion member past / present / future by first name like the magnificent DigificWriter (whose DCU name I just had to look up on a second device while jotting this down)!