Who kidnapped Saturn Girl and Lightning Lad’s twin children? Whoever it is, they’re trying very hard to make the Legion members believe Darkseid perpetrated the deed. Is the mad New God to blame? Or is something even more dangerous at fault?

The final fate of Saturn Girl and Lightning Lad’s twin children is revealed here! Tensions between the team and Earth-Man come to a boil, and an all-new Green Lantern is revealed. Will it be Earth-Man or someone else entirely?
** Legion of Super-heroes (2010-) #6: DC Universe

Legion leader Cosmic Boy makes a drastic decision that will affect the entire team. And the quest to build up the 31st century Green Lantern Corps continues! Plus: the Legion Academy is reintroduced to the DCU in a backup tale!

Here are questions to use as a guide to your reflection on this story: (these could be spoilers, so maybe read this part after you are done with the 3 comics):

Posting of first part of this particular storyline series, if you missed it: https://www.dcuniverse.com/community/boards/comics/legion-of-super-heroes-clu_1

Next week we use the Time Bubble to go back again several Decades to pick up again on a storyline we started several weeks ago!!! 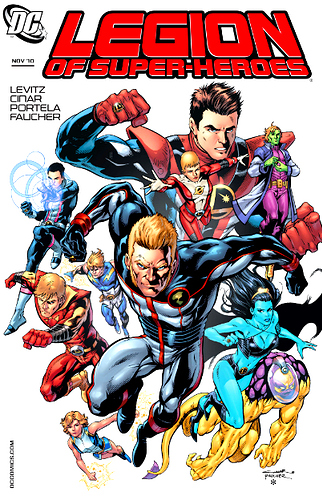 Let’s hear it for Vroom being Legion Club Chairperson the past several weeks!!!

There is a really cool Legion ring on Amazon for $40

A Legion ring would be a perfect pack-in for a DC themed cereal.

Cool, glad to go back to this series.

AquamonC137 I think I saw that! Bendis is hinting on Twitter that DC is going to come out with a Legion ring to celebrate the new series coming out in September and October, and he makes it sound like it’s going to be nice… not like those cheap plastic Green Lantern rings they did years ago…

Those rings may have been cheap, but for freebies they were pretty cool.

That and The Flash: Rebirth.

My fingers were too big for those rings, but they looked nice on the ol’ dresser.

So you’re waiting for the Mogo ring to be issued?

Oh, and I just realized the extra credit is Superman & the Legion of Superheroes! Very cool – that story is the one that fully turned me into a Legion fan.

What’s real spooky is Vroom was suggesting to me over on Discord that we use that extra credit one as a regular reading just as I was posting it here and hadn’t seen his message yet… so we both had it in mind same time!

Okay, so finished 4-6 – overall some pretty decent stuff. I liked the conclusion with SQ and LL’s kids and all that. The big thing that kind of threw me off that I’m not sure if I like is Shadow Lass hooking up with Earth Man. I dunno, maybe I haven’t read a lot of original/Retroboot Tas to see that this is in keeping with her character, but from where I’m sitting it feels like an obvious OOC push to create drama. I can get that it’s probably hard for her to find someone else to date that she hasn’t known for half her life, but…girl, you can do SO much better than Muttonchops DeFascist.

Also, it feels like a bit of a letdown to have the end of issue #5 to have “Phil Jimenez joins the Legion team for a special issue” only to have said next issue be rather standard with him drawing an 8-page back-up.

Anyway, onto the questions!

“What do you think of how the world of the New Gods is mixed in with the Legion storyline?”

I mean, it’s kind of there, I suppose. That whole stuff really felt more like Avalon/standard science fantasy stuff with some Omega Beams thrown in. I’m probably forgetting the very important reasons why the New Gods aren’t around much like the GLC in this time, but I would really rather see a full on team-up with the actual New Gods instead of some frankly rather forgettable peons.

“Now what do you think of Earthman? If your opinion changed at all, which issue did it for you and why?”

…Look, dude did some horrific crap back in that Geoff Johns run. It’s gonna take a lot more than hanging out with a bug alien, stopping some riots and shagging an alien chick to really start redeeming himself. What makes it even more complicated is the assertion that Brianiac 5 coerced those changes with Earth Man’s ring, which…was that mentioned in those first three issues? I know he edited Earth Man’s ring to null his absorption powers and I thought there was something about a bomb should he try and betray them, but I don’t remember them saying anything about making him more peaceful or changing his mind, because…that seems a little far, even for Brainy.

“How does this Phantom Girl compare to the one we saw during last week’s reading, the Secret Origins storyline?”

Not as quirky, definitely, but I guess you can say that’s her being acclimatized to Earth/UP. I did get a good chuckle out of her aping Shadow Lass’ frankly baffling explanation of why she’s shaboinking Earth Man, however.

I’m thinking the extra reading this week might not help you love Earth-Man more. Phantom Girl’s a real interesting character. I love the way her ancestor is showing up in the Terrifics. Or we’ll see I mean time works different for her planet you never know…

Oh, issue 5 was that month of those famous white background DC covers. What do you all think of the cover that we posted here from that wonderful collection where everything had a white cover with an icon symbol?

Oh I’ve read the extra credit material – like I said, that arc is what got me really interested in the Legion in the first place. I guess that’s definitely part of why I’m not buying this weird attempt to redeem him.

But don’t worry about the white cover gaffe – the one for #5 is pretty close to what those series of covers were doing anyway.