For this week’s Legion of Super-Heroes Club weekly reading fun, the Time Bubble has arrived in the year 1973. Our main selection are these 4 early 70’s classics, featuring early art from Dave Cockrum (of X-men fame) and Mike Grell (Warlord etc), either inking or drawing.

Superboy (1949-) #200 (pencils by Dave Cockrum) (black and white)
When Bouncing Boy discovers his powers are gone for good, he decides to ask Duo Damsel’s hand in marriage. But when Starfinger shows up demanding possession of the heroine, it’s up to the Legion and Superboy—and a powerless Bouncing Boy
DC Universe save the day! Contains pages reproduced in black and white.

Superboy (1949-) #223 (Jim Shooter, writer. Mike Grell Artist)
When the Time-Trapper learns that he can only rule the universe in possible futures where five Legionnaires do not exist, he brings Superboy, Karate Kid, Chameleon Boy, Saturn Girl and Sun Boy to his lair to kill them.
https://www.dcuniverse.com/comics/book/superboy-1949-223/ef3866b0-010a-49ff-9ea0-d49342731c72

Her are questions to use as a guide to your reflection on this story: (these could be spoilers, so maybe read this part after you are done with the 3 comics):

Posting of first part of this particular storyline series, if you missed it:
Our “extra credit” reading this week: LEGION OF SUPER-HEROES (1973-1973) #2

Published just a few months prior to the main reading for this week, The Legionnaires travel to the past to find out the story behind an ancient artifact that refers to a war between Earth and Krypton.

Next week for real:
(Legion Club Second Wednesday of the Month 9 pm EDT Watch a Long week due to July 4th holiday) we also use the Time Bubble to go forward a little to a very very special 2 or 3 issue event in Legion history that CHANGES EVERYTHING FOREVER, one that by the DC Universe rule book should not even be here (don’t look this way, Kelex)!!! 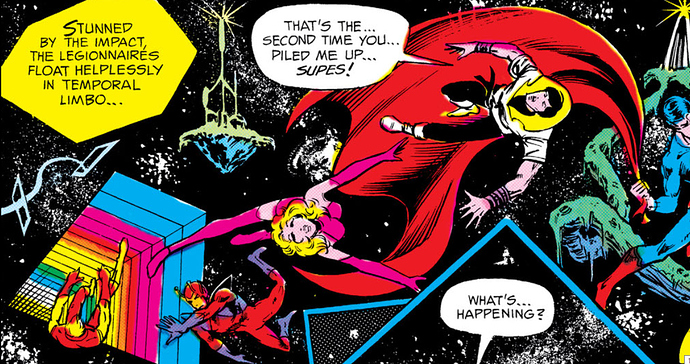 (sorry for odd line here or there, enjoy)

Superboy 195, Tales of the Legion backstory

The story features the consideration of a fella named ERG for legion membership. There are issues however and they decide not to let him join.

So this really is the first story featuring the hero that would later be called Wildfire. This particular story ends rather sadly but obviously later it’s found out that it’s not as sad as we thought.

Any ERG / Wildfire fans out there? I bet he and Kelex would get along just fine. 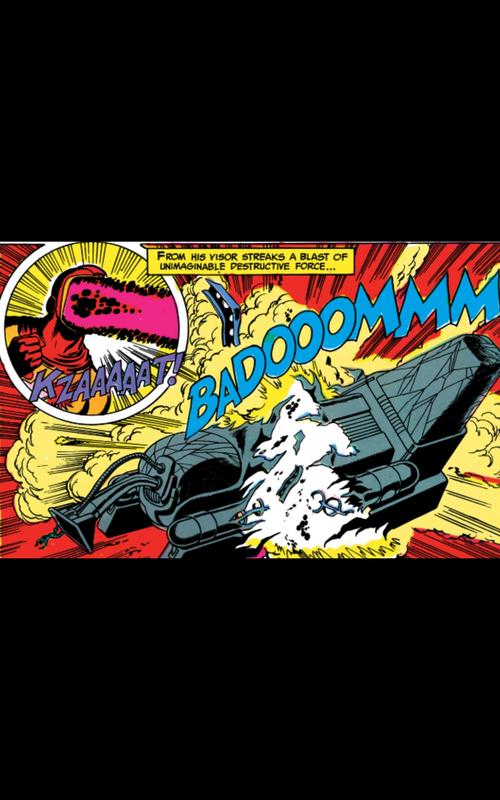 Loves me some Wildfire! Those sound effects in that panel are rad as well.

Strange day at the Sunday flea market out our way- only three vendors had comics this time, I picked up 4 “$1” comics to fill wholes in my paper comic collection, and saw Superboy and the Legion of Super-Heroes at all three!

Superboy and the legion of super-heroes number 200

The wedding of Bouncing Boy and Duo Damsel, featuring the villainy of Starfinger (why do I hear trumpets introducing a theme to a James Bond movie?)…!

This features early work of Dave Cockrum. Tell me you don’t see what he would do later with the X-Men uniform designs with this outfit of Bouncing Boy! 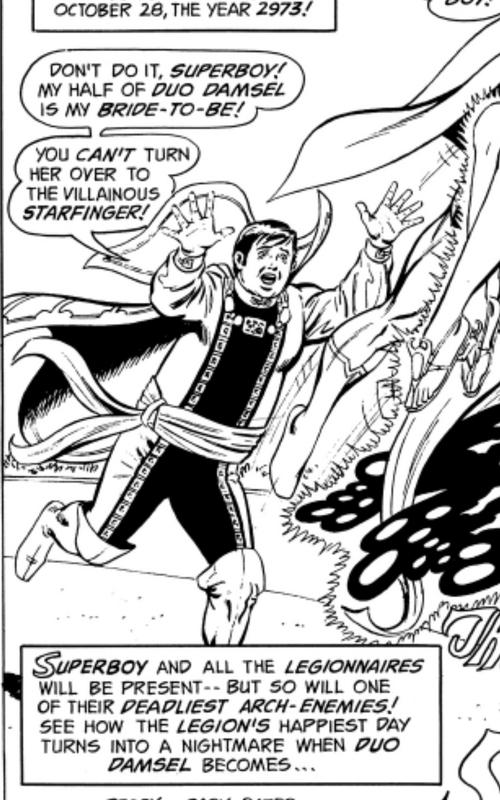 Superboy and the Legion of super-heroes number 200 continued.,

When they do weddings with the Legion they are a big deal! This crowded futuristic scene reminds me of that new drawing circulating of Jon Kent being offered a Legion ring by Saturn girl with the mob of Young super-powered people surrounding him. 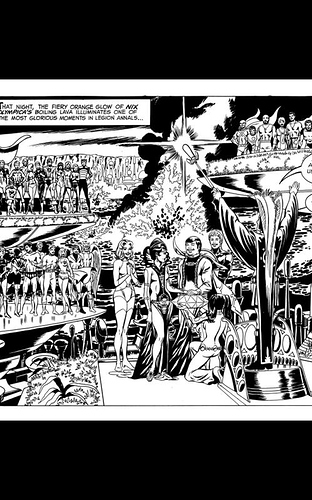 I get the sense Dave Cockrum has a thing for the beauty of feathered birds. I see a lot of that influence in his drawings here and also later in the X-Men and is it Starjammers later?

Last night for reading and putting your responses here to this particular section of the Legion stories.

In the early 1970’s, DC went with single story issues for the Legion, even two single stories in one issue. The stories are entertaining,although not as much fun as the more involved “continued next issue” type fare that would start running soon after these stories.

Issue 223 features more of a Mike Grell style in the art, as seen in the image I am posting here. The story by Jim Shooter deals with the Time Trader and some group of bad folks banded against these kids. The time paradoxes make at least some sense this time around, and the quaint use of a sand hour glass for the resolution is just fine!

New reading to be posted tomorrow, a shorter one due to our monthly Legion watch a long that occurs tomorrow as well. But as promised, the selection coming up tomorrow is for a Legion volume THAT SHOULDN’T BE IN THE LIBRARY!!! OOOOOOOO 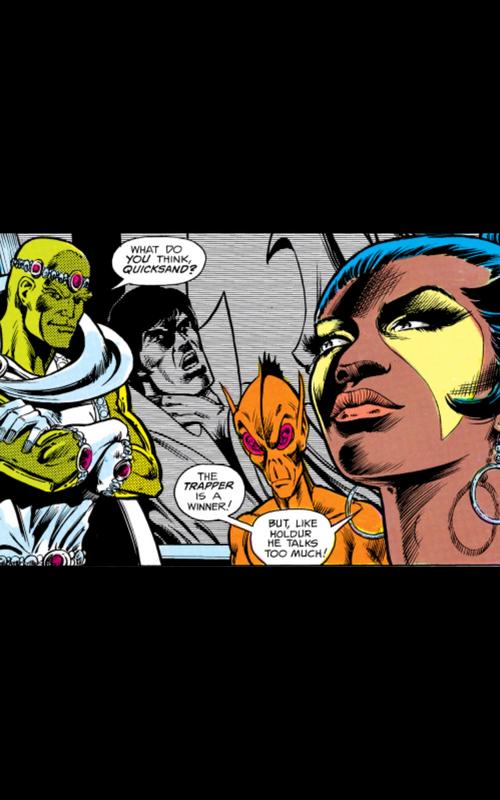 The latest book club hasn’t come up yet, so I’m not late! That’s my story and I’m sticking to it.

“Are you a fan of Bouncing Boy and Duo Damsel as a couple? Why or why not?”

I like it because it taps into the ultimate nerd dream – that one of us fat, nerdy guys could use are charm and good nature to get with not only an awesome beautiful woman, but one with a twin.

No, but seriously, as it’s portrayed here, it’s kind of the standard silver age romance stuff that’s kind of unrealistic and weird. It might read better having seen their romance blossom over the previous issues. I have liked them paired up when they’ve shown up in more modern comics, though.

“Which of the 4 issues Legion member line ups did you enjoy most and why?”

Here’s the thing with this kind of question: there are so many cool Legionnaires that it’s kind of hard to pick. I’ll look at one team and think “yeah, that’s pretty good.” Then I’d look at another team and think, “Oh dang, they got that guy/girl though.” I think that’s part of the problem with writing Legion stories – you want to write them all, but you have to juggle them around to make sure they all get moments to shine and showcase why they’re there in the first place.

So I’m just going to go with Team 1, because it has the most of them there.

Oh damn, man. This is kind of a hard one. I mean, Grell and Cockrum are industry titans, so in terms of “who’s the best” it’s really damn near “all of them.” Now, in terms of “who’s style do you prefer?” I think I’d have to go with Cockrum. 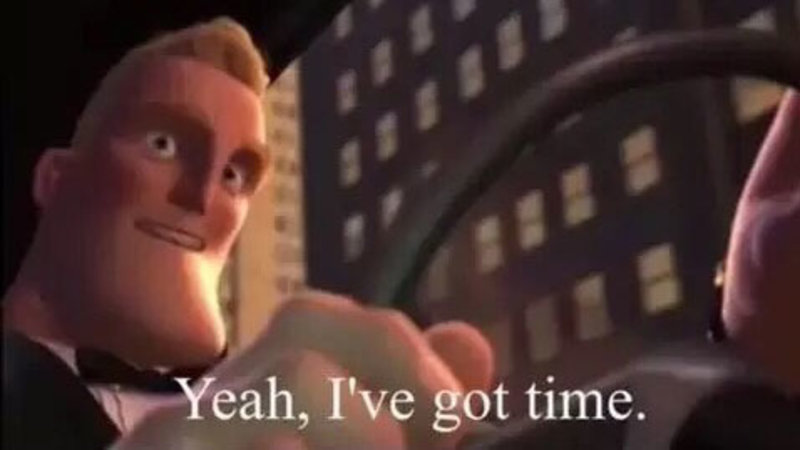 …I flaked and realized I didn’t answer the fourth question. Yeesh. I need coffee in my veins.

“Which issue did you feel was the best-written story, and why?”

Another toughie, most of them are pretty good. Off the bat, I wasn’t into #222, because Tyroc during this time period kind of bothers me. The whole racial aspect of him during this time was really weird. #200 was also just pretty decent – it has a cool milestone, but the whole drama involving Shrinking Violet felt pretty tacked on and unnecessary.

Issue #223 was cool in that it had a neat hook, a tight cast where you can get more in their head, but ultimately felt more like an art showcase for Mike Grell than something really praise-worthy in writing.

Ultimately I’ll have to give it to #195, not only for being a solid story about the Legion saving the day, but about the tryout process that I think is rather unique to the group, not to mention finding your peers and those you can rely on, and personal sacrifice. Plus it debuts one of my favorites in Wildfire, so that’s pretty cool.