Justice League vs The Suicide Squad

Who would be down to see this? It’s honestly really cool idea if James Gunn decides to do this, but the fight will be short if we are telling the truth here lol. They already have “Suicide Squad: Kill the Justice League” game releasing next year. Rebirth has the story it just would be cool though to see it in live action. 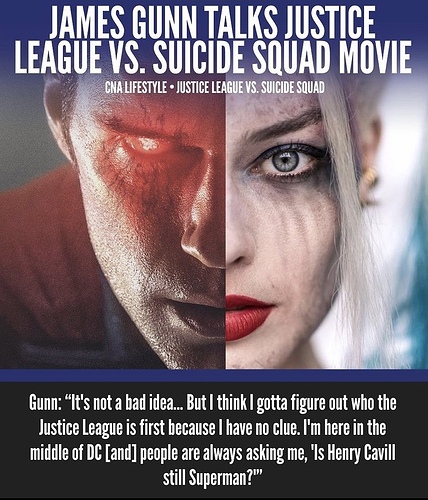 What about crime syndicate vs suicide squad? That way you don’t have to worry about bringing back Henry, affleck, gadot, etc.

Also not a bad idea!

I wouldn’t be against the idea. It could be really interesting because the League membership is a choice whereas Squad is not. That could lead to some really fascinating dynamics. Although I wouldn’t want it right away perhaps later down the line.

Sure, though I imagine that if it were to happen, Gunn would probably use a different roster. Like, I can imagine Harley might stick around, but the rest of the squad will likely be way different.

What about crime syndicate vs suicide squad? That way you don’t have to worry about bringing back Henry, affleck, gadot, etc.

That could also be a good one – maybe an adaptation of Forever Evil? But I would say that it would probably still have to be at least some of those original cast members for it to really work.

Please establish a Justice League franchise first. Let’s see the complete team, with a Lantern and Martian Manuhunter. Let’s see them as a recognized superhero team with a Hall of Justice, operating at full throttle. Let’s see them take down a big threat like Darkseid or Brainiac. Alternatively, I’m down for JL and SS to be on converging paths to take down a big bad together, ala Avengers and Guardians… but that would take the type of commitment to multiple connected movies that DC/WB doesn’t seem to have the stomach for.

Maybe down the road but only if no one is mind controlled or turned evil on the League side. Good Guys (JL) vs Bad Guys (SS), cool.

I recall Gunn mentioned in an interview originally Superman was going to be the villain of The Suicide Squad, not Starro.

“When I started writing The Suicide Squad, one idea was that they would fight Superman. The Suicide Squad has to catch Superman for some reason. That was all, just a vague idea. It’s gotten out of hand or is being controlled by someone. And then this group of lousy super villains has to face the most powerful hero in the world.”

Grateful they went with Starro since it’s so tiring to see them turn Cavill’s Superman into not Superman… It’s what turns me off of that Suicide Squad video game. Especially with Gunn’s R-Rated I don’t need to see Superman eradicate a person, leave that to the bad guys to do.

I feel like this has been the case with every Snyder Superman film. I’m so thankful for Superman and Lois.