Joker is not insane, nor he is psychotic. He is in complete control of his actions, so tell me, why is he always sent off to Arkham to be “reformed” when an actual prison would be better suited towards his crimes? 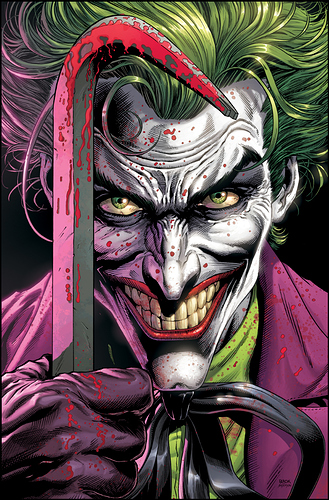 Because he has everyone in Gotham believing he is psychotic, meaning he can’t get a death penalty, and he can’t go to a real jail.

First off, this isn’t an objective fact w/in the DCU, but rather one of many interpretations of Joker’s condition. The fact is that nobody can really get a true handle on what exactly his mental state is, especially considering that it can also be dependent on who’s writing him. Whether he’s completely insane in the traditional sense, has some kind of super-sanity, has a combination of multiple conditions or something else entirely, part of the intrigue w/ his character is that you never really know what his exact state of mind is like. Similar to his origin, it’s best when it’s left at least somewhat open and not fully defined

To most Gothamites, however, he does fit the traditional depiction of insanity, so sending him to Arkham is the choice that usually makes the most sense, even if it’s after he’s just escaped for the 12th time. I’d imagine that for most of the city’s residents, it’s be a lot easier to write him off as just another dangerous psycho instead of confronting the uncomfortable idea that he’s almost certainly much more than that, and that the problem he presents thus requires a much more complex solution

That said, it could be really interesting to see a story where a judge actually sentences Joker to a regular prison instead of Arkham, if it hasn’t happened already (I can’t think of any off the top of my head). Seeing him have to deal w/ prison guards who don’t even pretend to care about his mental health could be a nice change of pace from the usual doctors

It has happened- The Joker: Devils Advocate written by Chuck Dixon, drawn by Graham Nolan. The Joker is sentenced to death and moved to a regular prison. Only problem is, he’s sentenced for a crime Batman doesn’t believe he committed.

Oh yeah, I have heard of that one, I just never got around to reading it. I’ll have to get on that now

Cause… Could you imagine him in Gen Pop? He would end up the only living convict in whatever jail you put him in.

Because DC needs him to so they can sell more comics? I mean, that’s the reason. I don’t think we’ve ever actually seen an on-panel trial for him.

If Joker was sent to a regular Prison he would be in solitary confinement all the time like he is in Arkham. Also, a person like that our society would be like this guy is nuts there is no way he is sane. That’s the way the Joker likes it crazy like a fox but still doesn’t want to mess with the IRS!

Here’s a scene from it. 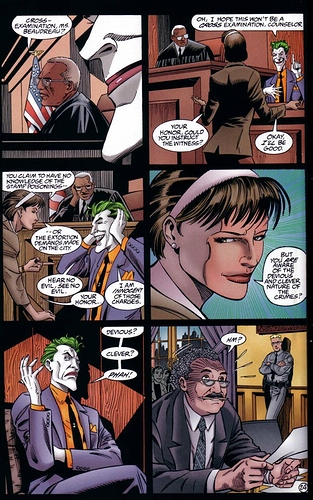 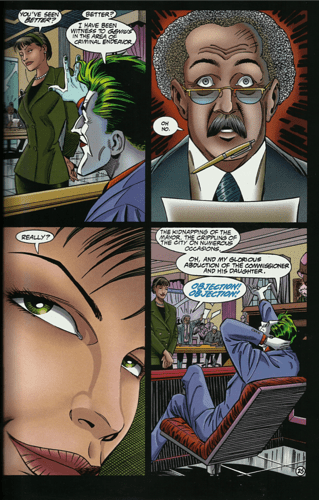 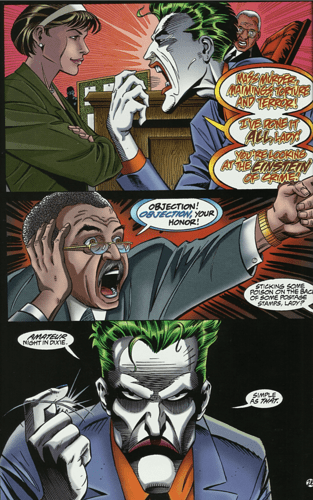 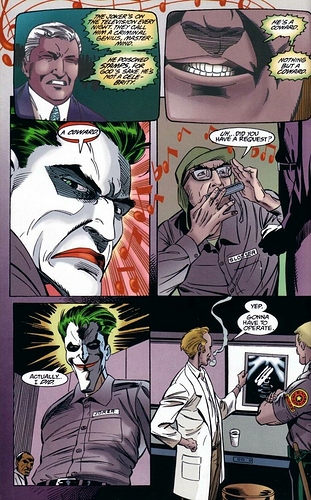 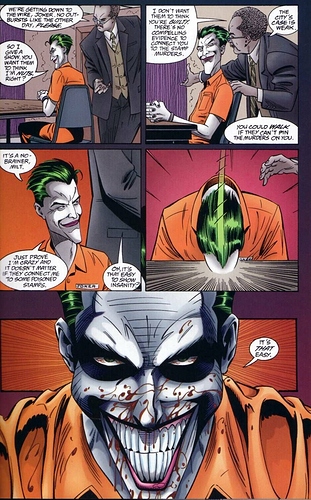 Apologies if I came off a tad strong during the intro. I was just interested to see everyone’s responses.
-M

Insanity is one of those things that we all think are simple, but, when you actually start trying to define it, turn out to be very complex. Lack of consistency in the presentation of the Joker, as well as the ever-evolving understanding of mental illness in the decades since his debut, help confuse the matter. Personally, I think that mental illness is rarely exculpatory, but can serve as a contributing factor that should be taken into account.

As far as why the Joker keeps getting sent to Arkham, some possibilities include:
-Arkham is better suited to keeping him isolated.
-People are comforted by the idea that someone who’s done the things he’s done is “insane.”
-Joker prefers to be sent to Arkham, for some reason. Bad things happen to people who try to make something else happen.

I’m a second-year law student. Criminal law isn’t my area, but maybe I can shed a little light:

This is, essentially, artistic license. An insanity defense in the legal sense requires that the defendant be genuinely incapable of distinguishing between right and wrong. The Joker knows what he does is wrong and doesn’t care, and there’d be more than enough evidence to establish that.

But if Gotham is in a state with the death penalty, he’d almost certainly be executed. Plus, Arkham is cooler than Blackgate. So they just mumble-mumble through the legal stuff so we can get better stories. That’s all there really is to it.

It’s also possible that Arkham doubles as an actual correctional facility that just happens to specialize in holding prisoners with extreme mental disorders. I’m not sure how much sense that makes, but it at least seems to fit better than saying the Joker somehow keeps getting away with an insanity defense.

I always thought the Joker was a classic sociopath, which is a mental health disorder.

Web MD definition:
A sociopath is a term used to describe someone who has antisocial personality disorder (ASPD). People with ASPD can’t understand others’ feelings. They’ll often break rules or make impulsive decisions without feeling guilty for the harm they cause.

People with ASPD may also use “mind games” to control friends, family members, co-workers, and even strangers. They may also be perceived as charismatic or charming.

While Joker lacks empathy for others, he is a master manipulator of Harley, his former Dr, other villains, he uses emotional plays against his foes…he can joke or charm his way out of some situations.

That was the definition of insanity I was thinking of. I understand at the end of the day that Joker goes to Arkham because it’s simply much more fascinating than your typical maximum security prison.
-M

It’s all.part of the plan…