Is Wonder Woman the balance in the Trinity?

I am reading Birds of Prey 68 and Dinah thinks to herself how Wonder Woman is the balance between Superman (light) and Batman (dark). This made me think of how much it mattered when she killed Maxwell Lord. Throughout the years, she has maintained the center and is often passionate about her actions. I think she wants to see the good in people, as it is her nature, but she also is capable of seeing people for what they are. Meanwhile, Batman often sees the worst in people and Superman often sees the best in people. A good example of Superman doing this is in Smallville where he is friends with Lex. In many ways, Wonder Woman is needed to ensure neither goes too far in one direction.

What are significant moments where Wonder Woman keeps the balance when she is with Batman or Superman or both at the same time? Do you agree that she is the balance of the Trinity? 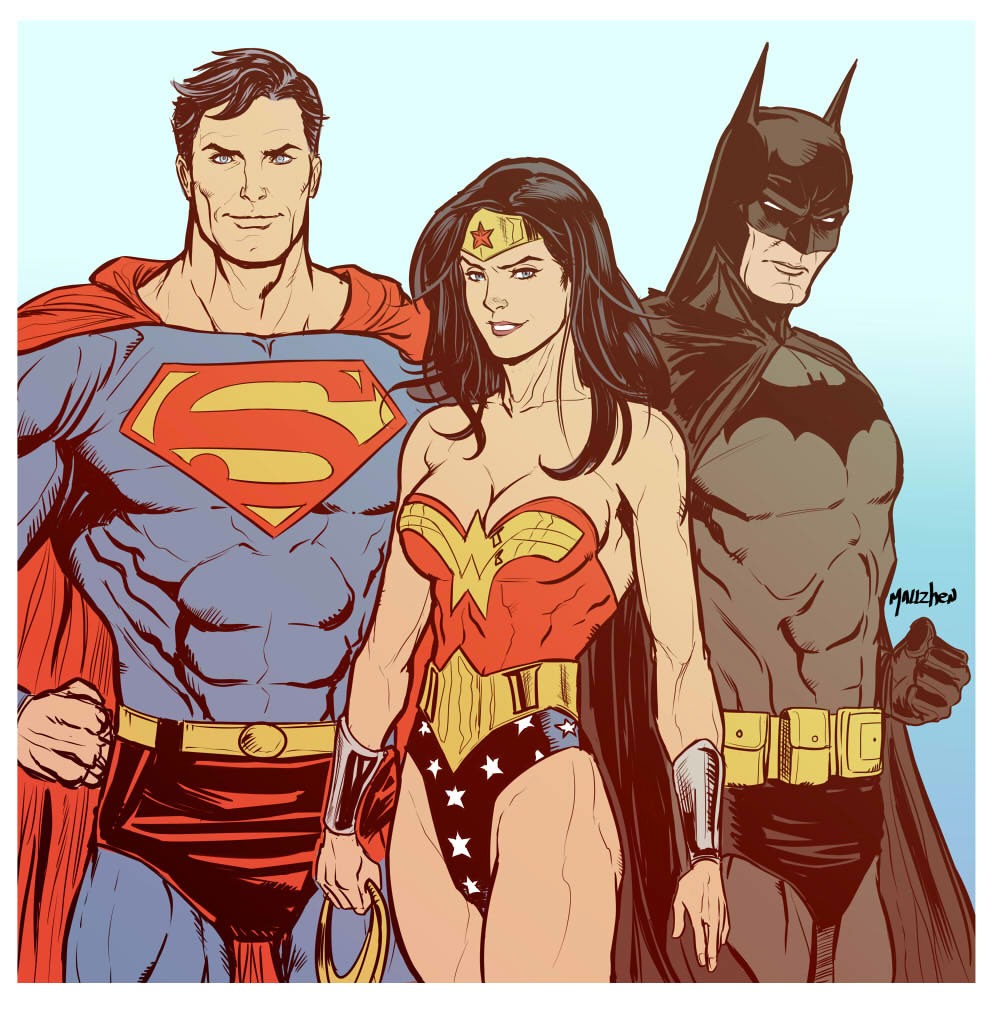 I look forward to hearing others’ thoughts on this. Right now, I’m not sure I would consider her the balance. Or, rather, they all balance each other - like the legs of a tripod.

I am interested as well. Your idea that they are all a part of the balance works to some extent.

I’m a huge fan of Diana Prince, so I may be biased here.

BUT I think in most interactions, when one of the others sways too far in any one direction she pulls them back to center. She seeks Truth (even wields it as a weapon!) and strives to inspire reason and empathy. If that doesn’t bring balance I don’t know what will.

I agree with @ralphsix in that they all balance/keep each other in check. I feel they all need each others point of view and is why the trinity works so well.

I don’t know if I necessarily agree with the balance argument. I don’t see Clark and Bruce as two extremes with Diana being the middle ground. These three are of such importance to the DC universe (multiverse, metaverse, whateververse), that any one of them represents a pillar so to speak. Kind of like the legs of the Tripod description used earlier by @ralphsix.

With the Trinity, I feel like it’s a situation where the whole is larger than the sum of its parts. What you get when you combine the three is more than a super team that can overcome great odds. You get an entity that represents justice, compassion, and morality.

Diana put the passion in compassion. She is the only true “warrior” out of the three, so she brings fire, but with that fire she brings empathy for all living things. So whether they are in physical battle, strategizing their next move, or hanging out over dinner (do they ever do that?)… I look at her as the heartbeat of a larger than life entity in DC… The Trinity.

Awesome art by the way. Who is the artist?

Daniel Mallzhen here is a link to his site:
https://www.behance.net/mallzhen

Well, my first thought is that I don’t like the generalization that Superman is Light™ and Batman is Dark™. Keep in mind that, for example, Superman has killed more people than Batman has. Does that mean that Superman is the dark one and Batman is the light one? Batman saw a kid trying to steal his car’s tires and thought he could be a hero, while in Byrne’s Man of Steel, Superman jumped to the conclusion that Batman was one of the bad guys. Does Batman really always see the worst in people, and Superman always the best?

Now, I know the question is about Wonder Woman, but I think that on the whole, Superman and Batman are far more similar than they are different, so it’s hard to balance two of the same thing. Wonder Woman is Wonder Woman. She has some things in common with Superman and Batman and some differences, but these characters were not built to contrast cleanly with one another. If anything, Wonder Woman is more different from the World’s Finest than they are from each other. She has no secret identity, no one home city, and has to deal more directly with diplomatic and political challenges rather than just fighting assorted criminals, monsters, and aliens. So maybe she doesn’t balance them in the sense of being in the middle so much as counterbalancing the two of them.

I mean when Superman and Batman are bickering, who is always throwing herself in the middle to stop them?

I always felt Superman was the balance. Both Wonder Woman and Batman are “my way or the highway” types. During debates, they’re both big on the mic-drop moments. They say what they want, and they could care less about the opposing viewpoint. There’s not a whole lot of effort put into"understanding."

Also, Wonder Woman definitely wields truth as a weapon. But it’s only the truths she chooses to reveal. And it’s extremely rare that such power is directed back upon herself.

Don’t flame me. But I thought this was a pretty good question. To me, Batman and Wonder Woman are extremely close in how they view the world. Superman, ironically, brings some humanity to the discussion.

I’m definitely biased. I still strongly agree with you tho. It’s not a woman’s perspective per say. It’s a Wonder Woman’s perspective that keeps Bats from going to dark or Supes from being too trusting. Just my personal opinion & piggybacking off of your thread. However, as soon as I saw the title I nodded yes with my head lol. The Trinity comics have a lot of good examples in them to sharpen the point that you’re making & I agree with. It’s always good to have a female perspective amongst testosterone. Especially, super testosterone. She’s like one of the guys to me. Yet, she can calm them down & keep things even keeled better than a Flash or the like imho.

This is an interesting concept in general. To see it described as this in a Birds of Prey comic only planted that seed even deeper for me. It was like seeing some validation for something that I have already thought but didn’t know how to word it.

So let me get this straight: Diana is Kirk? Bruce is Spock? And Clark is McCoy? 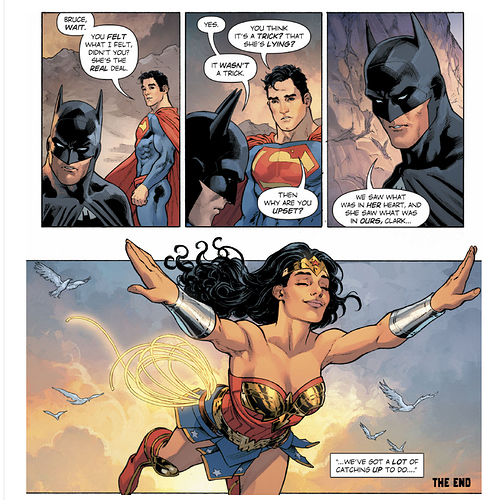 both Bats and Sups are nervous about telling Diana they screwed up. She lets them know that they should be better and to not stoop to the level of their enemies. Around page 4 or 5 you get acknowledgement from Clark that they Wonder Woman is right.

Given their history together, Batman and Superman bounce between best of friends and frenemies. Having someone like Wonder Woman who can at least voice another opinion into the argument is extremely helpful for balancing those two out. Now, just no one throw Kingdom Come WW into this argument and I might have a leg to stand on.

Thank you for your excellent examples!