Is The Joker Smart?

A friend was talking about how “If Joker were dumb he wouldn’t be able to escape arkham so much” which I’ll admit he does have a point, but I never saw joker as the smart type, I always consider Riddler and Bane the smart ones in batman’s rouge gallery.

I like to think that Joker is probably as smart as Bruce, Luthor, and Mr Terrific. But the insanity gets in the way of him truly showing how smart he is. His smarts become diabolical instead of genius. 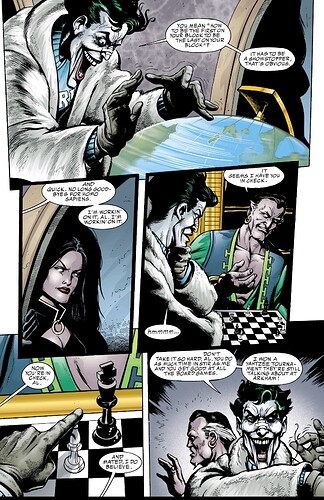 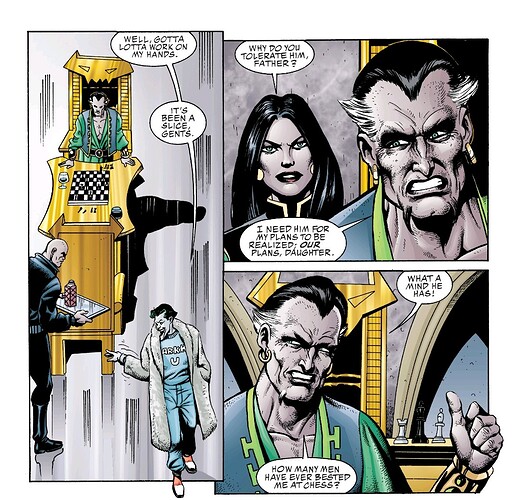 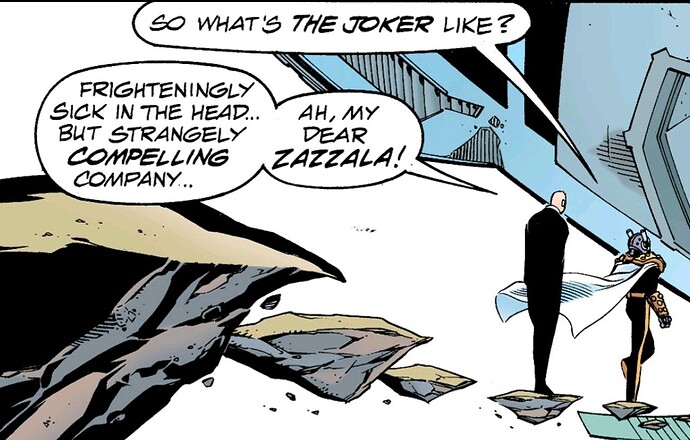 But the insanity gets in the way of him truly showing how smart he is. His smarts become diabolical instead of genius.

This is exactly what I always assumed as well.

I know he can be sneaky, not sure if he’s as smart as the Riddler. Funny this reminds me of Batman & Robin Adventures #5 where someone say Riddler was smarter then the Joker, and the Joker wasn’t really happy with it! 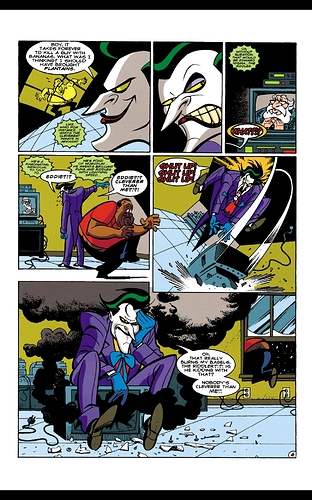 Wow, anymore examples? I didn’t know joker had that side to him.

Any examples? I’m so used to seeing Joker as mad man who likes chaos that I can’t imagine him being that smart.

Edit: closest I can think of is Batman white knight, but I see that as more Jack Naiper than Joker.

I believe he’s smart but knowhere near people like Lex and Bruce. I also don’t believe he’s as insane as he wants people to think he is. He does love chaos and has an unpredictable way which is what I would attribute to him beating Ra’s at chess rather then intelligence.

And even ra’s is impressed by him.

He does love chaos and has an unpredictable way which is what I would attribute to him beating Ra’s at chess rather then intelligence.

It takes more than just unpredictability to win at chess, especially against a foe who has played it for several lifetimes.

Same for the times he’s outsmarted Batman or Lex Luthor. It takes a certain level of intelligence. While he may not be able to build the devices they can, you could just as easily say that they can’t make the poisons that he does. Without question, he’s very intelligent- he’s just also cruel and demented.

Wow, anymore examples? I didn’t know joker had that side to him.

Those are the first two that come to mind- I’ll think on it some more.

Right and I said he was smart. I don’t think he’s more intelligent than Ra’s though and that the reason he would beat him would be more attributed to the chaos factor. 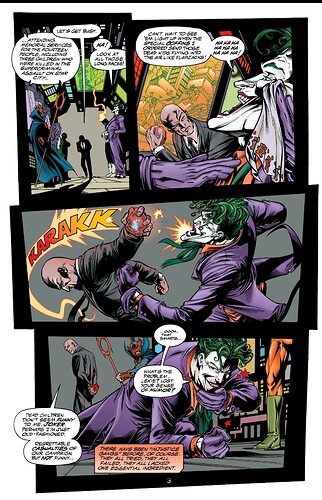 Is this from Forever Evil? I know I read that before.

joker invented a bunch of chemical weapons he is super smart, master manipulator, he just doesn’t go out of his way to prove his smartness like riddled,and doesn’t care if he ‘wins’ as long as he messes with batman

I think so, but as previously stated, I think his insanity kinda disguises it. He’s good at thinking ahead for sure and pre-ploting his moves with his schemes, but he doesn’t go around flaunting his intelligence like the Riddler does (which I think is moreso Riddler’s character).

In Red Hood and the Outlaws Rebirth, Jason has a small flashback to a time when he was Robin and Batman told him “don’t underestimate him, his unpredictability is dangerous” or something along those lines (which I guess we know how that turned out… soooo…)

I do believe that he doesn’t like it when a flaw is pointed out, an example I can think of is the infamous Mad Love story, when Harley hangs Batman upside-down in order to get the paranas smiling and Joker reacts by shoving her out the window. While this could be just his ego not liking that Harley was able to be almost successful on her own without him or his permission, I definitely think that he didn’t like being corrected, or feeling like his one flaw was solved in a way that never occurred to him, which I think is normal for people anyway, everyone will always forget to think of a certain way.

TL;DR: he is smart, but he doesn’t flaunt it, or like to be pointed out when he has a flaw in his plans.

Definitely has intelligence of people like Bats Lex Terrific etc.
if he wanted to he could easily rule without any one knowing (heck look at injustice in one move he turned the world upside down) but he just doesn’t want that. He wants to mess with bats, spend time with bats, and break bats. That’s his lives joy.

In short yes he is but would rather use it tango with Bats.