Injustice Animated Series Set in the Dcau ( The old one)

Would you guys be down with an Injustice show set in the old Dcau with Kevin Conroy and all other cast members in JL Unlimited back?

Actually that kind of alternate universe existed in the old show. … The Justice Lords. The episode they were in gave us an idea of what our heroes would be like evil & gives us, today, an idea of how the DCAU Justice League would be against the Injustice universe. Plus it showed Batman being the good guy in both dimensions. The biggest differences were instead of Joker being punched thru the stomach, Lex gets heat visioned to death off camera. And instead of Lois being dead, Flash is. Technically this was a prototype of the Injustice universe we would know today since the show & episode debuted way before the 1st Injustice game came out. 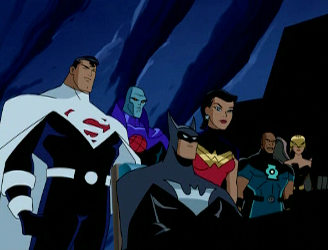 I’m talking about making an Injustice series with the main characters. It’d have much more of an emotional impact.

No because that Superman was amazing