Infinite Frontier is almost out!! Let’s talk about it. Full spoilers below, you have been WARNED!!!

6 Likes
Every Moment and Important Teaser of Infinite Frontier #0 and Where the Thread Will Pick Up
Nathan.Payson March 2, 2021, 8:57am #2

So the big bad is Darkseid?!?! 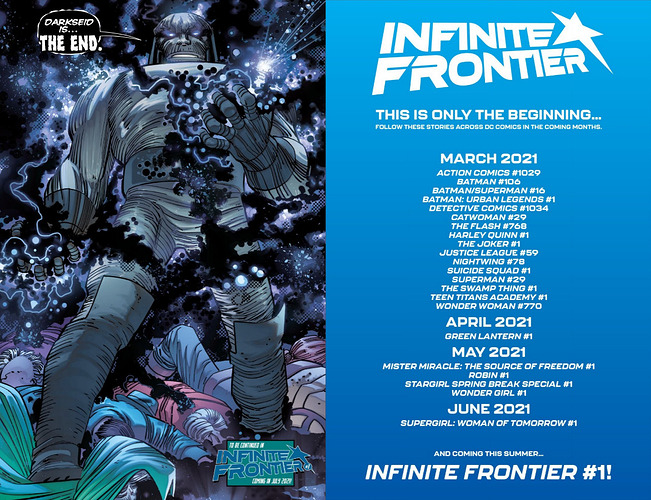 When I first saw it before I read the words I got very Anti-moniter type vibes, so I’m really curious where this is going.

Some other exciting things:

Roy is back, but doesn’t know how the f*** it happened.
Alan Scott came out to his children
Nubia is the new queen of the amazons
Hyppolyta is doubting her faith
Jon Kent is full of hope and compassion but could be headed down a darker path.
Yara Flor is being followed by someone (and the Amazons are aware of her, but don’t know who or what she’s doing)
Wally is now the Flash while Barry is joining Justice Incarnate.
Joker killed all the inmates in Arkham.
There’s alot more, but I am going to bed because it’s late.

Last thing I want to point out: Lot’s of teases here. Really interesting. Many of these are getting series. Suicide Squad is out today, Teen Titans this month, Swamp Thing is out today, JLD is in JL out this month. Midnighter got a picture (He has a back-issue). Supergirl is getting a series (or mini-series) in June. 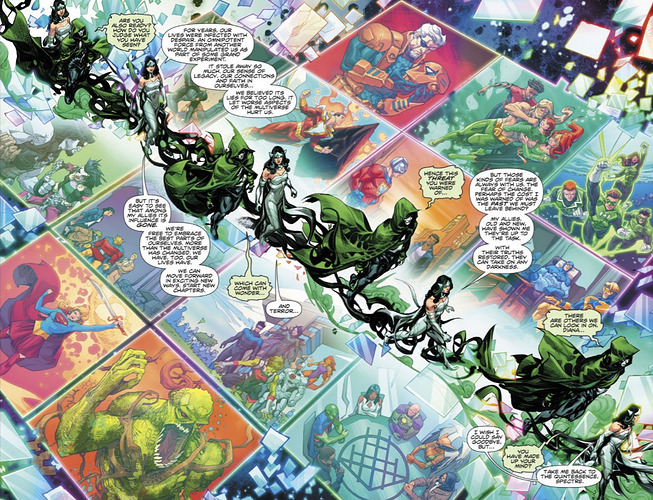 Crush and Lobo have something in development
Deathstroke has a Deathstroke Inc. Book.
The Justice League Table thing is the Elseworld book that Barry Allen is probably joining

Notably, though a couple of titles don’t have ANYTHING. Booster Gold and Blue Beetle, the other Green Lanterns (Green Lantern Corps book maybe) based on the Crux Worlds thing? Shazam and Aquaman don’t either. Hmmmm.

More announcements are to be announced today according to Williamson so it’s possible that we will see something about one of these big announcements.

Frame story- pretty bad. It was way too much of Spectre is wrong and then Diana is right. Put some ambiguity into it. Then I was pumped for the villain reveal just for it to be another case of Darkseid. I am so tired of him.

Batman- Very confusing with too many characters, but the ending got me excited, and I enjoyed it.

Wonder Woman- Definetly not my cup of tea. No interest from me.

Superboy- Badly handled, but I think it shows big potential.

Obsidian- Great to see him again. I have never liked adaptational sexuality, but their family dynamic is so great.

Teen Titans- Just some fan service to a franchise I never enjoyed. Hope its fans enjoy it.

Green Arrow- This was really good mostly for the banter. My third favorite.

Stargirl- I think STRIPE was more useful here than in all of Stars and STRIPE combined. I see Star is making more jokes than usual indicating they are heading more in a direction of being more comfortable as a superhero than a teenager, Principal Sherman is Black Now (or did Dragon King make an android that got the race wrong and nobody noticed. I am going with the second one, because it makes me smile). My second favorite.

Here is a nice call back. In Stars and STRIPE Pat said it was Vigilante who kept trying to reach out to him and get the remaining soldiers back together. Here Pat finally picks up the phone, as Vigilante is the one again trying to bring them back together.

The Flash- My favorite. Just a sweet scene of them.

Joker killed all the inmates in Arkham.

They don’t show what went on in the Asylum before the explosion, so guaranteed his rogues escaped. They’re too good to blow up.

Your implying that there were a lot of inmates in Arkham at the time. We only know that Bane was in there (and that Clayface might be BACK!?!)

I just contacted my local shop and subscribed to Infinite Frontier. I will not partake any further in the discussion, until I pick it up on Thursday. Looking forward to chatting about it.

Frame story- pretty bad. It was way too much of Spectre is wrong and then Diana is right. Put some ambiguity into it. Then I was pumped for the villain reveal just for it to be another case of Darkseid. I am so tired of him.

Darkseid hasn’t been in a major DC comic since 2016, so it’s been a while. JLO was good, but unimportant. I think this makes a lot of sense, but I hope it doesn’t just retread past ground. On the frame story, I think it made sense why it was that choice (Death Metal #7), but I didn’t love it.

Superboy- Badly handled, but I think it shows big potential.

It was just a story warning of a dark future, while Wonder Woman had faith in him. It seems more like an open ended question that was designed to show readers how Jon is different from Clark.

Obsidian- Great to see him again. I have never liked adaptational sexuality, but their family dynamic is so great.

Alan Scott has been confirmed gay for years and the queer-coding has been there for a while. With Queercoded characters just read it as him never being out and so he didn’t tell the readers. It’s not adaptational if it’s been around for forever. Bruce Wayne isn’t being made suddenly gay. It’s a lesser important character who’s been full of queer-coded stories.

Stargirls art felt disconnecting compared to the rest. The style was too old.

For this type of book, which is like a collection of movie trailers, I thought it was fine but more flawed than not. I thought the Diana/Spectre stuff was just a little too obvious and stretched out but understand it was to bridge the trailers so there wasn’t much they could do differently.
The sad truth is that I have not been excited about the direction DC is taking for a long time and this just solidified it. I enjoyed the Future State books more than I expected to but I don’t really look forward to that becoming more of a reality. I know it’s sold as possible futures but they are leaning into a lot of it.
The only offshoot that I am mildly interested in is Barry exploring the Omniverse.

Wally: But what about all those heroes I killed?

ot a picture (He has a back-issue). Supergirl is getting a series (or mini-series) in June.

I want to see more of Hal, Kyle, Guy, and Jess! That’s the Green Lantern book I want to read!

Hell, they might all be back. We’ll have to see if it’s just Roy.

This was my favorite page of the story by far. I know he has/had a lot of detractors, but I think Bendis has a wonderful voice for Clark.

Also, I wouldn’t worry about Shazadam – that’s just a joke! 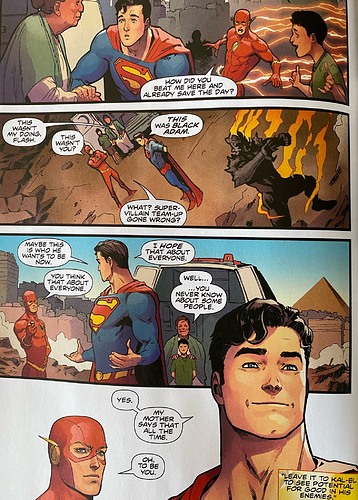 Yeah, I’m not a fan of changing Alan Scott’s sexuality.

As someone who doesn’t read Batman/Detective is this where I can find Barbara Gordon and Huntress now?

Did this tease a Green Arrow/Black Canary book? If so, I am ALL IN!!!

Overall thoughts, this was a fun read. I believe someone mentioned this was like movie trailers and I agree with that statement. I am pretty excited for what is to come and I can’t wait to see more of Darkseid.

He’s been GAY FOR FOREVER… It’s not a new thing. This is just about him coming out to his kids. But it’s not a sudden change.

Basicslly, this a framing story, with Spectre showing Diana scenes of several heroes that could establish some new titles and take several heroes off of the Justice League

Diana will on a quest.

John Stewart will be in outer space.

Cyborg will be a mentor at Teen Titan Academy.

Leaving Superman, Batman and Aquaman in the League.

This issue sets up Black Adam, Queen Hippolata, Green Arrow and Black Canary as part of the new Justice League (along with new Bendis character Naomi). Somehow Hawkgirl is still there too.

Wally is the new Flash

Batman is being hunted by the police, including Renee Montoya

The Justice Society and Infinity Inc existed, including Jade and Obsidian. I could see that a combined title set respectively in World War Ii, led by Wonder Woman and present day Infinity, using Stargirl and her JSA, With her group as the lead feature. Jade is in Season 2 and probably Thunderbolt and his new owner

Roy Harper is back from the Dead

Darkseid is the BIG BAD Of the new universe, easily exterminating the most powerful being in the universe. I hope Spectre comes back but much less powerful. I can’t see the Vengence of God not coming back. Jim Corrigan as a detective and Spectre is a great combination

All Good situations that can bring Fresh energy into characters and titles that have been lacking both.

I just said it on Facebook! Color me giddy as hell! 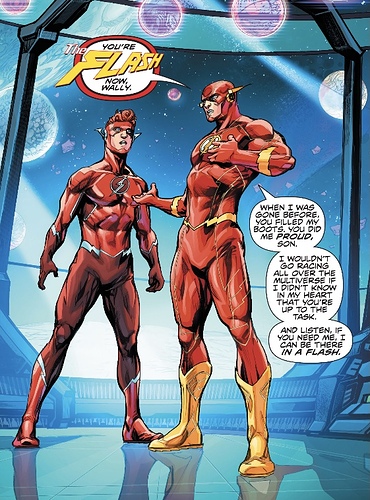 The Golden Age Alan Scott that’s coming out was always presented as being straight prior to the Flashpoint/New52 reboot. His son, Todd Rice aka Obsidian was Gay (exactly when that came out, I have no idea, I never read Infinity Inc)
When the New 52 was started a new modern day Earth 2 Alan Scott in his twenties is shown to be Gay. However this was long considered an alternate Alan Scott Not the original Golden Age version.
The current golden Age version of Alan Scott was revealed to be Gay in the recent Green lantern 80 year anniversary special.
The current revelation that he was Gay and married to “beard” him is no different than the Murder of Nora Alan in the Flash books! It’s a retcon.
It’s well done and it treats the known history of Alan Scott with respect while adding this new angle to it. But Ultimately it IS a retcon.
(I will stipulate that it is a much better retcon than Barry’s mother’s murder. And I really don’t mind it nearly as much as I do that wildly unnecessary “Batman-izing” of Barry’s origin.)