Should either be an idea for a movie or new tv show based on the DCAU, possibly including certain characters, storylines, titles, settings, and timeline for reference (before JL, during Batman Beyond etc). Preferably, any ideas should not retread storylines already acted upon before in the DCAU (No MOTP idea where Andrea returns, No ROTJ where Joker manifests in the Neo-Gotham some other way). Furthermore, this thread is not intended for animating any storylines already written (such as Dark Knight Returns) in Bruce Timm’s style. This thread is intended for original DCAU ideas only (but already established characters can be used). Anyway, have fun! 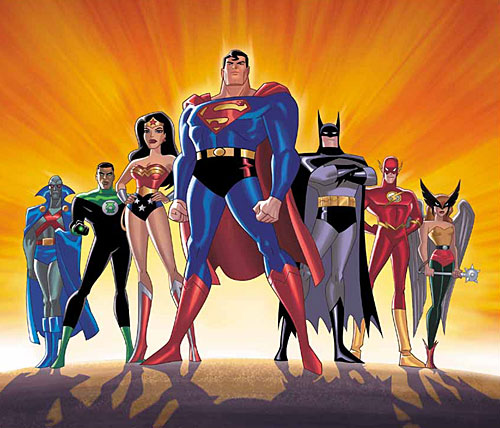 @Viilax thank you for this awesome topic! Now on to the ideas…

First off its probably a good idea to bury Darkseid and Brainiac since they where done, ever so awesomely, to death. Dwayne McDuffie’s Crisis of Two Earths script was based on the treatment he created for the season 3 of JLU that never happened so let’s leave the Syndicate out. I would tackle the Anti-Monitor and a COIE THEME for a new S3. Yes I know GL:TAS tackled this, but I think they could go a lot deeper and more fleshed out in JLU.

Personally, I would like to see a movie set during Batman Beyond following the apparent death of Blight. It could be about Terry struggling with his dad’s death and finding a sense of purpose in his crusade for justice now that he has seemingly avenged his father. I think it could be a great character-focus, with Terry taking a hiatus as Batman for a few weeks/months. During this time, he keeps seeing clues that Blight may still be alive and causing trouble, inspiring him to don the cowl once again to stop him. However, he will discover that Blight is infact gone and that a villain (new or established) was behind the clues all along. Needless to say, this will convince Terry that he’s still needed as Batman and that his responsibility does not end when his need for vengeance is achieved. Obviously, this movie would be set between seasons one and two. I don’t feel like it would be a conflict of interest or anything, because I don’t believe it would step on the toes of the tie-in comic or any established storylines.

Second of all, I would love a New Batman Animated Adventures style movie where Mad Hatter and Scarecrow team up (The Time Sale/Jeff Loeb Batman Trilogy really proved how well they work together) or if it was Scarecrow, Mad Hatter, and Joker, or even just Joker and Scarecrow. I’d like to see Batman and Nightwing have to begrudgingly work together to stop them. Admittedly, I have not thought this idea very much out, but I think it would be a good concept to explore.

Thirdly, a Justice League Unlimited movie where they battle against the Secret Society (set during the show) that would use most of the original members (particularly Riddler and Scarecrow) mainly because they couldn’t be used at the time the show aired, and I would love to see a movie where the original LOD fights the Justice League (obviously, they wouldn’t be able to include Solomon Grundy, Brainiac, and maybe not even Grodd) but I think it would still be a good concept.

All three of those are fantastic ideas that I would enjoy watching multiple times! Are you listening Warners? Give it to us!!

I agree with you, I feel like the Anti-Monitor/Crisis storyline could be fleshed out way more by a JLU story. Of course, I really enjoyed the ending to JLU and felt like it was very fitting, but since they’re opening it back up, anything is game. Even though all the DCAU shows technically had an ending, whether inadvertently (like Batman: The Animated Series) or advertently (like Justice League), I would still like it if shows like BTAS and Beyond got actual conclusions to the stories that answered more questions. For instance, what happened to Nightwing? When did Batgirl leave? What happened to 3/4 of Batman’s rouges gallery (both in the present and in beyond). The JLU/Beyond flash-forward episode kind of ended the show by asking more questions and then answering only those questions (questions btw, I don’t think anyone was asking).

Whoa whoa whoa… “They’re opening it back up.” Ok what have I missed? ? Are you talking about the new movie or have you heard something else?

Yeah, I was talking about the new movie, which I’m guessing is set after the JLU show due to missing characters.

Honestly the Fatal Five movie has opened the flood gates, it shows that they’re willing to revisit the DCAU in a serious way.

Maybe that’s one of the motivations behind making the Fatal Five to see if there’s still interest. Well Warners, YES THERE IS! There never stopped being any interest.

Exactly! The fact that the most recent JL Rebirth roster is the same roster for JL proves this. For many people the DCAU defined DC’s characters for fans. Practically every story has been a good one. These versions shouldn’t be forgotten, they should continue to be utilized and expanded upon. There has been more buzz for that HQ movie and the Fatal Five than any of the New 52 based movies (which I would love if the animation style was better).

I have an idea how about a new JLU that focuses on the theological side of the DCU? The Spectre, Phantom Stranger, John Constantine, Trigon etc. This is something they havent really come close to tackling. I’d like to see them have the guts to go full on into it. If done right it could be one heckuva ride.

I think that’s a really good idea and I do think that would be a new side to the DCAU, the closest we’ve gotten has been WW episodes or the one Doctor Fate one. I would love more sorcery-focused episodes or a movie.

We start the new show with the JL we all know and love from the OG show but right from the start their legacy characters are there (Robin, Superboy and so on) along with some references or appearances of the older heroes we get 1 season like that. Then we jump forward in time and all the sidekicks we just saw who were secondary characters step forward and are now the JL and they are much older. We could see the older versions of OG JL members become what the JSA members were in the first season and new sidekicks pop up. Then this cycle continues until we hit the end of legacy characters ever invented for the core JL members. I am not sure how long we could go with that but it would be fun seeing a deep dive into the JL across the whole history of the DC Universe.

How about a Show taking place between the original Batman Beyond finale and the Epilogue episode, called simply “JLU.” It will focus on Terry in college and accepting a more active role in the Justice League. It can shed some light on a few unanswered questions:

What caused Bruce to leave the team?

How did things change after the joker was killed.

Why did the JL reduce their numbers

What are the plastic tips of shoelaces called (The Question answered that one; they are called aglets, and their true purpose is sinister)

I would like to see them tackle Crisis of Infinite Earths - the Crisis of Two Earths was good. But something more would be appreciated

I’m just going to say that some of y’all should moonlight on the day job and put your ideas on paper. I’m not even going to contaminate this question with my usual Wildstorm idea.

Keeping to the DCU, I’d like to see the next generation be animated before moving to live action. I’ve been reading and watching the same characters for 40 plus years. Supes, Bats, and WW are worth the time they get. I’d like more time spent on next generation heroes and villains.

If Disney can get an Oscar out of Miles Morales, imagine what Damian Wayne, Jon Kent, or Jaime Reyes could do.