Even without any sense of familial obligation, why wait for someone just as strong as them but with an undeniable mental handicap to wind up being taken advantage of by some super villian (or to simply get confused) and tear apart a city?

It’s really cool to see Bizarro get his own Trinity/support system in Red Hood and the Outlaws, but what about the Super family?

What do you all think?

Should we see Bizarro World (Htrae) restored in the main DC timeline (Superman made it for him the first time if I remember correctly) or Bizarro depart for Earth-29’s Bizarro Universe?

Should Superman crack open those Kryptonian genetic engineering files at the fortress to research a potential therapy for his Bizarro twin?

I remember in the Adventures of Superboy TV series, some of the best episodes in the series are the Bizarro episodes. They regard each other as brothers rather than one being an imperfect copy of each other. And with every appearance, they get closer and closer as brothers. I highly recommend checking those out. The series is here on DC Universe. 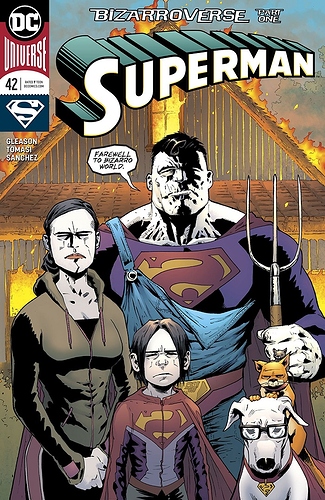 Oh that’s so cool! Thanks for the recommendations!

I thought D.C. did an incredible job with Bizarro in Red Hood and the Outlaws. I thought they finally figured out how to use him as a character-but then they dropped him, so I don’t know if they have any plans on what to do with him presently.

I think he’s back in now. Haven’t been keeping up with Red Hood, but Bizarro has been back for a couple issues, not sure in what capacity.

I cut Red Hood from my pull list once he went off on his own-just lost interest.

Bizarro is my favorite “villain” ever. If you want another Bizarro story try Superman escape from bizarro world

It’s a good point that probably boils down to the character’s origins at a time when it was acceptable to expect people living with impairments to completely function in society with no support, and not helped by years of one-shot Bizarros that tended to die redeeming themselves at the end of their stories. But yes, as a clone, he’s basically Superman’s twin brother, and the idea that he’s usually just dismissed as a nuisance to be driven away isn’t a great look for DC, these days.

Smallville did a surprisingly good job of fixing this problem, I think, by making Bizarro a clone of Clark Kent possessed by a criminal from the Phantom Zone. Then, he’s just a villain who nobody would be better off helping.

I suppose that was the crux of my point. Superman is the guy who cares about everyone, regardless of their circumstances or ability. Why then does he demonstrate so little compassion for a being who is essentially himself “but for the grace of god”? He built him his own world once upon a time, but this still felt like a sort of distancing measure. Out of sight, out of mind.

I suppose it ultimately comes down to this thought experiment. Were you to discover a long lost brother but then realized he needed special help with things, leading perhaps to ambivalence about becoming a part of their life, hopefully you would pose yourself that question that every DC reader knows can summon their better angels.

What would Superman do?

Superman building Bizarro his own world is the best solution for everyone. It allows Bizarro to be himself without fear of harming himself or others. But how Superman reacts to Bizarro really depends on what type of Bizarro we’re seeing. 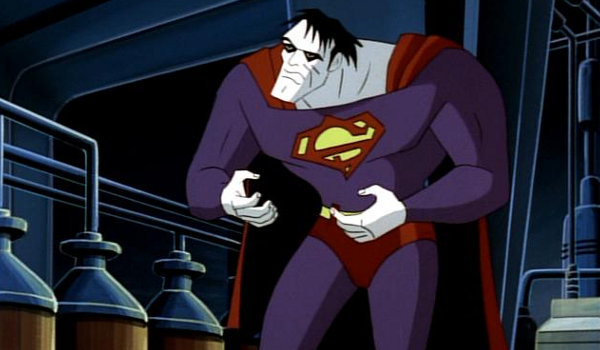 Superman the Animated Series gave us a more tragic Bizarro who caused trouble by trying g to help. Superman treated him with as soft a hand as the situation would allow, and gave him his own planet as well. 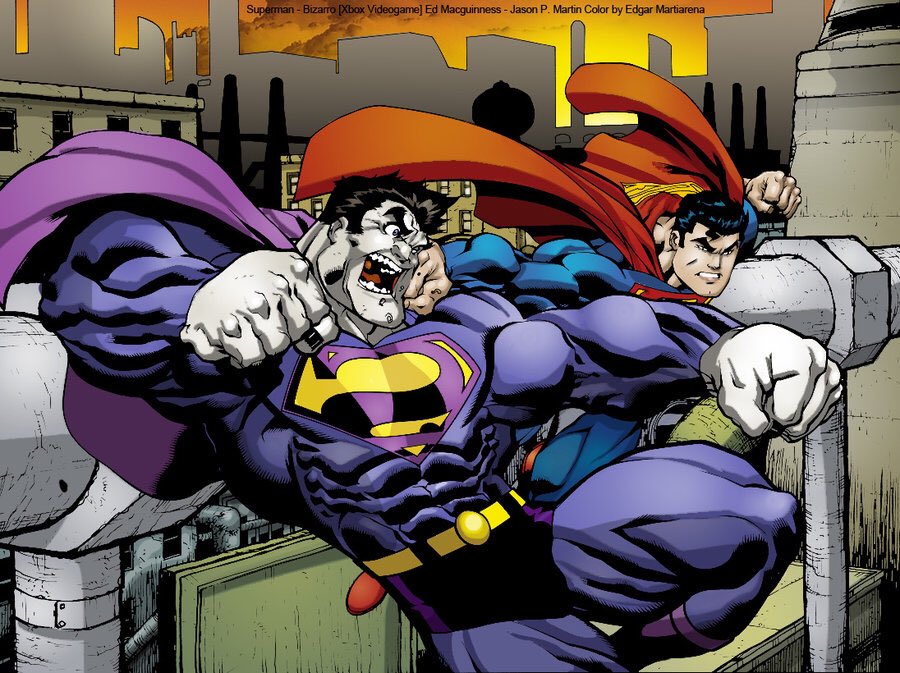 CqZre6vUEAAJWy2900×673 150 KB
Jeph Loeb used Bizarro often, this version created by the Joker when he had Mxyzptlk’s power. This version was a tad meaner, but still closer to being misunderstood than being a monster. 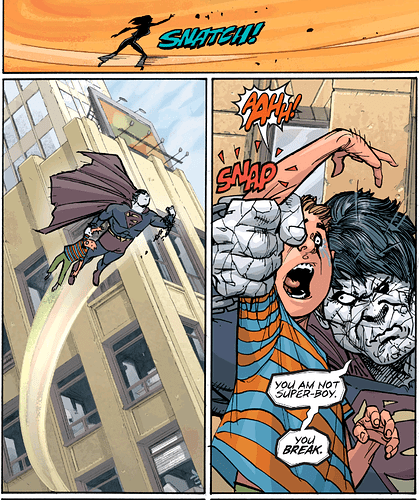 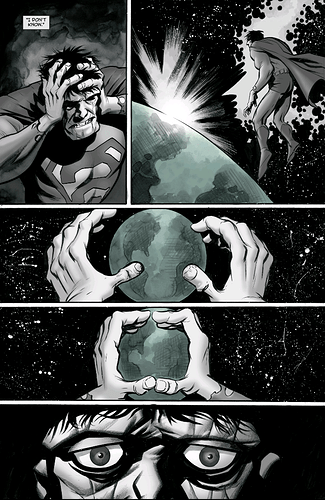 Folks have raised fair points that I heartily agree with, especially the Superboy episodes that feature Bizarro.

So, I’ll mention the Bizarro mini-series from 2015. If memory serves, it showed a more playful, almost comedic at times, Bizarro. I haven’t read that mini since it concluded, but I remember it leaning towards the screwball comedy side of things with Bizarro, rather than the misunderstood creation of Lex Luthor, or confused monster angles that are typically trotted out.

The Bizarro of RHATO is a different Bizarro than the regular iteration seen in the Rebirth volume of Superman from what I recall, hence why he was intelligent for a while and could ably (to an extent) work as part of a team.

I want to Bring up the Bizaro Clone in Mark Millar’s Red Son, #1 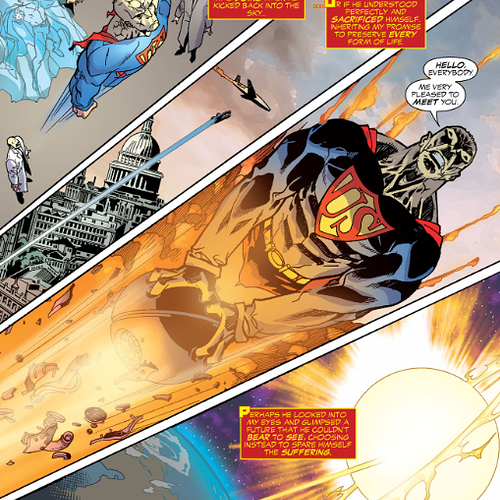 Screenshot 2020-05-28 at 10.33.15 AM509×583 479 KB
The Concept of him being Superman’s clone wasn’t lost, yet his Choice to take the hit from the nuke show’s an amazing understanding of Honor and a Moral Compass seemingly built into Supe’s DNA.
Even in the spit second when it seems like the US Bizarro Clone weighs his worth against Supe’s, before his sacrifice
He seems like a necessary extension of Superman’s “Character”( both meanings). I don’t think giving him a direct link to the “Super Family” would be appropriate. He is an answer to a “What if?”
I believed many writers have used him as such. Maybe more as a plot tool for Superman, or other characters then an individual in and of himself. He is ANOTHER example of the Individuality of Superman.
Superboy, as in indirect clone of Superman, with Lex’s DNA, posses a duality of personality and specific Differences, not just a Flawed copy that explain, “There Can Be Only One!”
1 Like
Klone-13 May 29, 2020, 2:27pm #15

He seems like a necessary extension of Superman’s “Character”( both meanings). I don’t think giving him a direct link to the “Super Family” would be appropriate. He is an answer to a “What if?”
I believed many writers have used him as such.

I see what you mean, he is a useful contrast. My only qualms are that villains make the best contrasts to heroes. So, Ultraman, or even Red Son Superman (not really a villain lol), great contrasts. I just rewatched the Smallville Bizarro eps and I really liked them, because they made Bizarro an outright villian so it worked as contrast.

Bizarro in the comics though is like I said before, Supes “but for the grace of god”. The comics Bizarro as plot device, should ideally inspire reflection in Superman. A sort of super-compassion, because if Supes can’t see himself in that Bizarro, how does he empathize with anyone’s situation?

Maybe an outright connection to the Superman family is off the mark, Supes doesn’t have to give him a bunk at the fortress or even give him a Kryptonian name like he did with Kon-el. I’d settle for some generalized compassion, just some internal dialogue showing that he thinks of his wellbeing. It would probably hold even more weight if Supes was shown thinking of Bizarro’s circumstances without Bizarro needing to destroy something right in front of him. If anything would highlight the spirit of Superman, I’d say it’d be that.

That could just be my idea of him. For me, Supes character is summed up in my profile pic. Benevolent, compassionate, considerate, powerful enough to crack the Earth in half, gentle enough not to. The Bizarro from All-Star Superman was kind of how I’d envision them interacting, with Superman preserving Bizarro’s poetry forever in his fortress.

Bizarro in the comics though is like I said before, Supes “but for the grace of god”.

That’s a good way of putting the way I said that Bizarro is a “What if?” That’s what I think makes “him” more of an extension of Supe’s “in canon” personality. Not so much of Bizarro being a contrast to him. Like Joker and Batman, Superman and Lex, Flash and Thawne. Especially the Villains are quick to referance the fact that the hero’s presence created the villain.
I think we are on the same page.

Me am unhappy to not discuss Bizarro? Me am never happy when he is not in comics. Me disagree that Superman’s enemies should not take care of he and me don’t wish he was in Blue Shoes and the Inlaws more.