How Do The Tweed Brothers Still Exist?

As everybody loves to say, Batman has the greatest rogues gallery in all of comics and maybe in all of media as a whole. So I have a question, from the hundreds of villains created to fight Batman, how on earth do Tweedledee and Tweedledum still exist? I mean, does anybody actually like them? When a character is found to be unpopular, they’re usually swept under the rug pretty quickly. Yet these two have made SEVERAL appearances in TV and video games! YET NOBODY SEEMS TO CARE! I don’t hate them by any stretch, but what makes these guys so everlasting? Do they even have any good stories? I could see them sticking around if they were the Mad Hatter’s henchmen that just get punched and are dealt with, but they never worked under him until very recently. Am I missing something? What are your thoughts on these guys and why do you think they’ve stood the test of time? 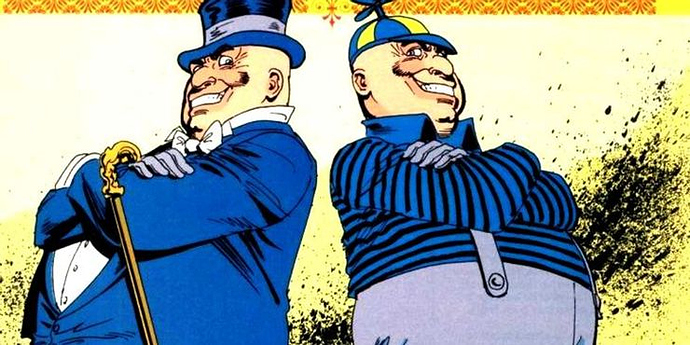 I guess they make for good fodder – plus from what I remember, in most recent stories where they feature, they’re often paired up with Mad Hatter, making it more of a “Wonderland Gang.”

Yeah I like that they’ve been given a place in the Wonderland Gang, I still hope that they get a little more fleshed out as individuals (or a pair of individuals?) for being nearly 80 year old characters.

To me, I feel like there is just an inherent novelty surrounding this particular pair that makes them irresistible to Batman writers. For one thing, their pretty low-level, so if there is some sort of action montage in the story, they make for great cannon fodder. But more importantly, they’re a duo, not a single villain. By including the Tweed brothers instead of a loner like say, Killer Moth, the fight seems like more of a challenge. Not to mention that you can use them to incorporate some level of parallelism between two other characters. As I recall, the beginning of Batman 50 by Tom King does exactly that, where you get to see Batman and Catwoman each fight one of the Tweed brothers, and from how the panels are set up, the use of the brothers instead of two independent villains does a better job at tying the story together.

And besides, who can resist a face like that?

They’re definitely a fun pair of characters, and I always enjoy their appearances. For what little impact they have.

Well, as low level villains I don’t really have much of a problem with them. Not ever villain Batman faces can be The Joker, Two-Face, or Ra’s al Ghul. And whatever shortcoming they might have, it is made up by the fact that there are two of them. That does make them a little more challenging than a single low-level villain.

Not to mention we already have an Alice and Wonderland themed villain.

They predate both versions of the Mad Hatter, actually. It’s Tetch and Faux Tetch that are the poseurs.

Oh…I thought they were introduced in Batman 74 not Detective 74…So not only did Bill Finger forget he created the Mad Hatter when making Faux Tetch, he forgot someone ELSE made a Wonderland themed villain when making the original Mad Hatter… Although it kind of worsens my point that the Mad Hatter became a fleshed out character before the Tweeds did even though they were first…

So not only did Bill Finger forget he created the Mad Hatter when making Faux Tetch, he forgot someone ELSE made a Wonderland themed villain when making the original Mad Hatter…

In fact, they had appeared three times in 1943-4, but Finger never used them. Then yes, he invented one Mad Hatter (who had no alias), and later, he created Jervis Tetch (the one with the mustache). And just to confuse everyone, Gerry Conway declared the one with the mustache to be an impostor, and he retroactively gave the name Jervis Tetch to the first (nameless) Mad Hatter…

That did happen in Detective Comics 841, and it’s probably the best Tweed story ever told. Even when their motivation of “get recognition” is pretty cliche, and it’s more focused on Jervis, at least they HAVE a motivation…

yay i knew i remembered that

glad to know I’m notimagining it