Hopefully the show ends well. It’s been really good so far and I will respect the creators so much if they actually keep Poison Ivy dead.

Nobody makes me cry my own tears. Great episode. It started off slow, but really picked up. Thanks DC Universe for excellent programming.

Great review. I always look forward to what you have to say.

I don’t think Ivy is dead if Ivy were to die I think it would be like during the events of Batman Arkam Knight video game.Also Joker is gonna get a huge ass kicking in the season finale and to be honest this version of Joker is pathetic scum.

What the hell!? That was an amazing episode, but the ending killed me!

“30 bucks if you put me in your pocket” was the absolute best.

This is my favorite version of Ivy, I hope she isn’t dead T_T

The penultimate episode of season one.
-It was actually kind of reasonable to assume that the killer plants were being controlled by Ivy.
-Yeah, I’m thinking that calling out the tanks might be in order, Batman.
-“Jazz not the worst thing at Jazzfest.” More GNN fake news. Curse them and their anti-Jazz bias.
-I can’t decide if the trees make me want to make a Wizard of Oz, Hamlet, or LOTR reference.
-I suppose I should just accept that, whatever some people are seeing in Kite-man, I’m not seeing.
-First Ivy was Honey Ryder, now she’s the 50 foot woman. What’s next?
-“I’m part plant, so maybe they’ll have the same effect on me.” Sure, why not?
-They really should have left the Queen of Fables in the book. Also, once Harley took her out, shouldn’t they have tried to find her book and release the League’s heavy hitters?
-I’ll be surprised if Ivy dies. We’ll see.
Looking forward to the finale.

I knew it was gonna be Kite Man to the rescue. 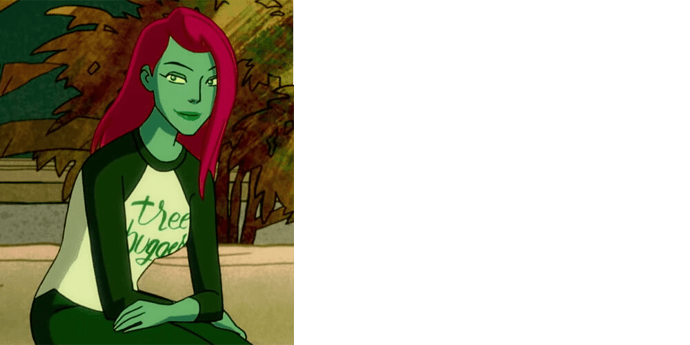 “30 bucks if you put me in your pocket” was the absolute best.

“What you know I have a type”

I adore this rag tag team. Great episode, love the Ivy and wonder womans lasso bit, Long showers and nascar cracked me up.

Also like @capo-mage mentioned counting the rings on the tree.

Your Etrigan is rad!!! Did u create that?

-I suppose I should just accept that, whatever some people are seeing in Kite-man, I’m not seeing.

I didnt like his character at first, but hes grown on me. Funny and endearing, hell yeah (sorry not sorry

Lol no I wish, @capo-mage it’s from when the JL series when they get turned into kiddos, etrigan gets turned into a baby. I forget what episode it was but hes adorable.

Oh ok. I should’ve got that. I love those episodes. YJ, JL action love both times when they turned into kids.

I know I’ve isn’t permanently gone, she was too big of a drawl with ivy for the show and hints of them ending up together. Did we see the blooming and the foliage under her? She’s a plant element she will heal. Still all the same I hope before she pops back up Harley hurts Joker and watches Batman cart him off to Arkham (you can’t kill Joker he’s her nemesis at this point). They did make my best friend panic and cry though, but as I told her nobody in Gotham stays dead very long… all the same when Ivy comes back, next week or season two…

Joker is going to wish he used weed killer.

In this universe she’s a metahuman though, unlike in the comics where she was the result of Jason Woodrue experimenting on her.

I used to love this show but this episode I hated it. ivy dying? REALLY? like she had so much development and these past episode of Harley and the crew trying to save her just for her to die like this??? This show has token a major turn it’s almost like it wants their fans to be mad and if Ivys death stays I am leaving the show.

A paltry distinction! She’ll be fine.