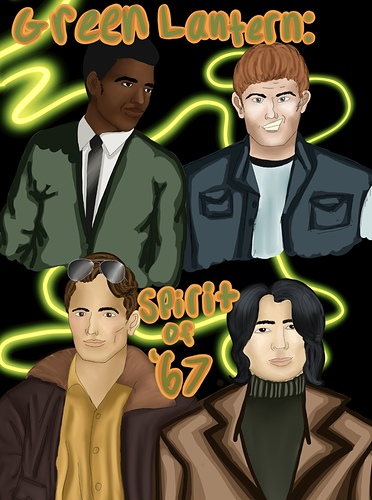 image1114×1494 342 KB
The year in 1967, and the place is the West Coast’s second hottest hippy stronghold, Coast City.
People used to mention Hal Jordan’s name in the same breath as Chuck Yeager. But since his dishonorable discharge, he’s been unable to get steady work, and now he’s found himself sleeping on his best friend, Oliver Queen’s couch. So the air force’s former golden boy’s found himself in a downward spiral, questioning everything about who he is and what he wants.

John Stewart’s been many things. Marine, civil rights activist. But now he’s just tired, fed up with nothing changing. So he’s back in school, getting his architectural degree, watching the world outside change faster than he can keep up, and wondering if he made the right choice.

Ever since Kyle Rayner moved to Coast City for school, the world’s opened up to him. His artistic spirit has soaked up everything the weird, wonderful underbelly of the city has to offer. Kyle’s on the side of the youth of tomorrow, and he’s been anxious to shake things up for a long time.

Guy Gardner’s dad always told him he’d never be anything but a low-down delinquent, so Guy’s decided to prove him right. After running away from home and hitchhiking to Coast City, he’s finally getting geared up to start a new life.

Love this! Great art and story